Sotto on Isko Moreno's call: We do our job without the media following our every move | Inquirer News
Close
menu
search 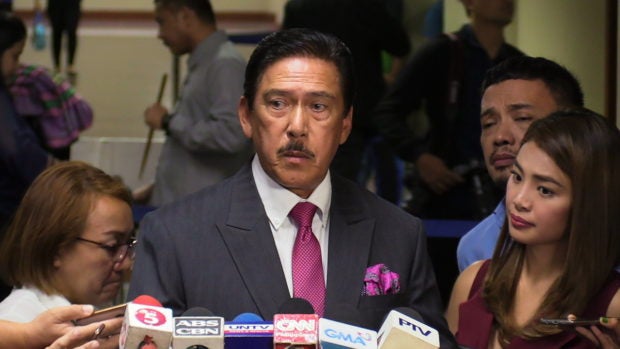 (Fellow countrymen, as Senate President, I want to, first of all, thank our citizens especially health workers who genuinely help without bragging. Helping your fellow man without expecting reward or praise is what is truly noble.)

(Now for our countrymen who keep on bragging and challenging senators and politicians to come out and help their fellow man, I hope you wake up and have a sound mind.)

Sotto stated that the call to hold special sessions to give immediate aid to Filipinos came from the Senate, stressing that his fellow senators, in quarantine or not, are silently helping out in their personal capacity.

“Batid namin na hindi ito ang panahon ng pasikatan o pagalingan. Lahat tayo dapat panalo sa laban na ito. Walang Pilipinong maiiwan (This is not the time to show off or compete. All of us should win this, no Filipino should be left behind),” he added. 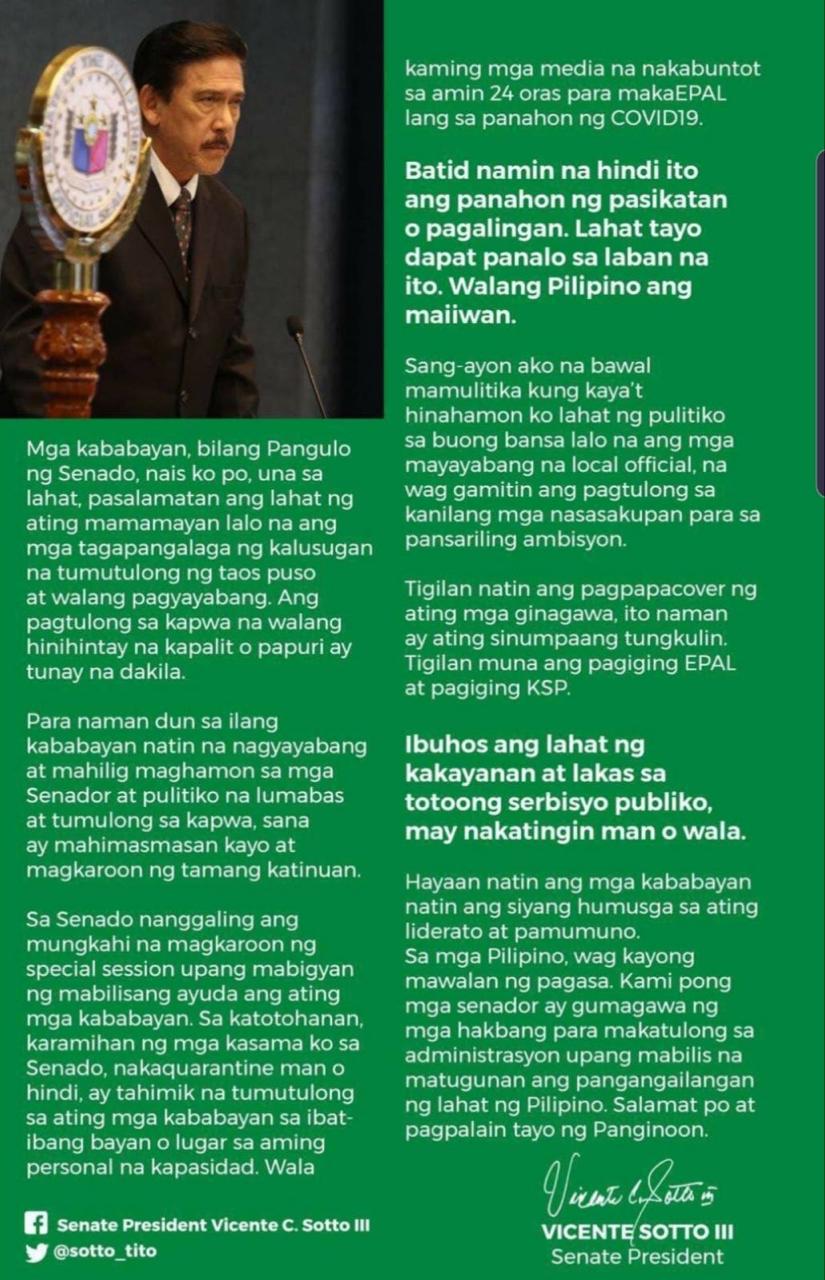 During Moreno’s address, he challenged senators to stop politicking and focus on helping Filipinos amid the pandemic.

(I am calling on our leaders from the national government, the opposition and administration especially those who are quarreling. Can you stop politicking for just 90 days?)

(To the 24 senators, the secretaries and to politicians like me, we must now show our love to the Filipino people. We the citizens of Manila are Filipinos too. Show us your love now, many are suffering.)

Sotto also addressed Moreno’s woes in the statement, saying he agrees that they should stop politicking and challenged “arrogant local officials” to not use their giving of aid to constituents for personal gain.

(Stop asking coverage for everything you do, as these are your sworn duty anyway. Stop being show-offs and attention-seekers.)

In a tweet posted Saturday, Sotto reiterated his stance and stated that the duty of senators is to “promptly pass the enabling law so the [executive department] can use [government] funds to respond during this health crisis.”

“We did so in 18 hrs,” he noted. “It’s not our mandate to repack rice and sardines with a complete PR [public relations] team around us. Some of us do, WITHOUT the PR team!”

Our duty as lawmakers is to promptly pass the enabling law so the exec dept can use govt funds to respond during this health crisis. We did so in 18 hrs. it’s not our mandate to repack rice and sardines with a complete PR team around us. Some of us do, WITHOUT the PR team!

In a separate press release also on Friday, Sotto added that senators “have not been sitting idly in our homes” as they have been going around to check and distribute goods to frontliners and families in need.

“We have always been around, but we are unlike some who constantly seek public applause for their every action even that which are actually just perfunctory,” the senate president said.

He added that anyone who wishes to know what their contributions have been amid the pandemic, they can ask and they will provide a detailed list of their actions.

“There is no need to come up with those dramatic, teary-eyed, voice-breaking appeals uploaded on social media platforms. That is not only cheap, but it reeks so much of traditional politics,” he stressed.