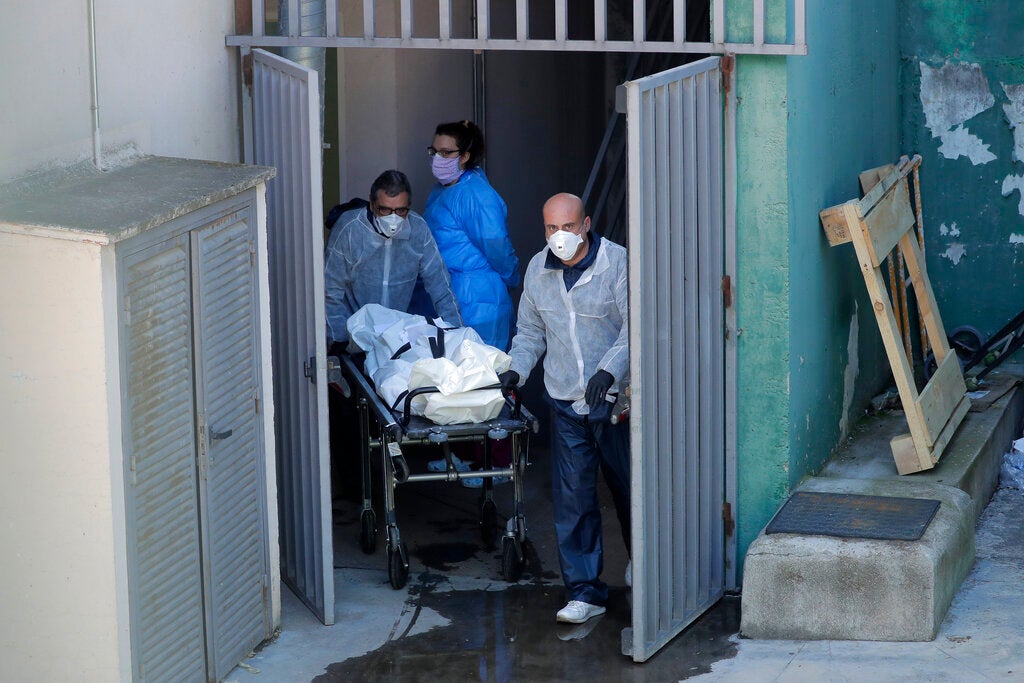 NEW YORK  — The Trump administration urged Americans to cover their faces in public and limited exports of medical supplies Friday as New York’s governor took his own dramatic step to fight the coronavirus — vowing to seize unused ventilators from private hospitals and companies.

President Donald Trump announced new guidelines that call for everyone to wear makeshift face coverings such as T-shirts and bandannas when leaving the house, especially in areas hit hard by the pandemic, like New York. But the president said he had no intention of following the advice from the Centers for Disease Control and Prevention.

“It’s a recommendation, they recommend it,” Trump said. “I just don’t want to wear one myself.”

The policy change comes amid concerns from health officials that those without symptoms can spread the virus, especially in places like grocery stores or pharmacies. Officials stressed that medical-grade masks should be reserved for health workers and others on the front lines of the pandemic.

In one of the most aggressive steps yet in the U.S. to relieve severe shortages of equipment, New York Gov. Andrew Cuomo said he would sign an executive order to take ventilators that aren’t being used.

“If they want to sue me for borrowing their excess ventilators to save lives, let them sue me,” Cuomo said. He promised to eventually return the equipment or compensate the owners.

The move is aimed at the kind of shortages worldwide that authorities say have caused health care workers to fall sick and forced doctors in Europe to make life-or-death decisions about which patients get a breathing machine.

Cuomo has said New York, the nation’s worst hot spot where deaths are surging, could run out of ventilators next week. Louisiana’s governor said New Orleans could exhaust its supply by Tuesday.

Shortages of such things as masks, gowns and ventilators have led to fierce competition among buyers from Europe, the U.S. and elsewhere.

Trump took it a step further Friday, saying he was preventing the export of N95 masks and surgical gloves under the Defense Production Act, a move he said was necessary to ensure that the medical supplies are available in the U.S.

A regional leader in Paris described the scramble to find masks a “worldwide treasure hunt,” and the French prime minister said he is “fighting hour by hour” to ward off shortages of essential drugs used to keep COVID-19 patients alive.

Cuomo, who has complained in recent days that states are being forced to compete against each other for vital equipment in eBay-like bidding wars, called for a coordinated national approach that would send supplies and people to different areas as their needs peak.

The Democratic governor was praised by a hospital association for moving to seize extra ventilators, but some Republican elected officials outside the city objected.

“Taking our ventilators by force leaves our people without protection and our hospitals unable to save lives today or respond to a coming surge,” 12 of them said in a statement.

The number of the people infected in the U.S. exceeded a quarter-million and the death toll climbed past 7,000, with New York state alone accounting for more than 2,900 dead, an increase of over 560 in just one day. Most of the dead are in New York City, where hospitals are swamped with patients. About 15,000 people were hospitalized statewide, most of them in the city.

The economic damage from the lockdowns and closures mounted. The U.S. snapped its record-breaking hiring streak of nearly 10 years when the government reported that employers slashed over 700,000 jobs last month. But the true picture is far worse, because the figures do not include the last two weeks, when 10 million thrown-out-of-work Americans applied for unemployment benefits.

Worldwide, confirmed infections rose past 1 million and deaths topped 58,000, according to a tally by Johns Hopkins University. Experts say both numbers are seriously undercounted because of the lack of testing, mild cases that were missed and governments that are underplaying the crisis.

Europe’s three worst-hit countries — Italy, Spain and France — accounted for more than 32,000 dead, or over half of the global toll. The crisis there was seen as a frightening portent for places like New York, where bodies already are being loaded by forklift into refrigerated trucks outside overwhelmed hospitals.

More than 1,200 miles (1,930 kilometers) south, the situation grew more dire in Louisiana, where over 10,000 people have tested positive and deaths reached at least 370, up nearly 20 percent from the day before. Gov. John Bel Edwards warned that the hard-hit New Orleans area is projected to run out of hospital beds in a little more than a week.

Our Lady of the Lake Regional Medical Center in Baton Rouge has gone from one unit dedicated to coronavirus patients to seven. Nurse Christen Hyde said nurses call families twice a day to give updates on their relatives, in some cases delivering bleak news.

“To have to call a family member and tell them that their family member is not doing well and they are probably going to be passing soon is just devastating,” said Hyde, who has had four patients die.

As for the patients, “the last thing that they see is us telling them that they are going to have a tube placed down their throat to help them breathe,” she said. “It’s awful. It’s horrible. It’s really affected me.”

Italy, the hardest-hit country in Europe, with about 14,700 dead, continued seeing signs that infections and deaths might be leveling off. France reported a surge of more than 1,000 deaths Friday, bringing its overall toll to more than 6,500.

“The work is extremely tough and heavy,” said Philippe Montravers, an anesthesiologist in Paris. “We’ve had doctors, nurses, caregivers who got sick, infected … but who have come back after recovering. It’s a bit like those World War I soldiers who were injured and came back to fight.”

Spain recorded over 900 new deaths, down slightly from the record it hit a day earlier. The carnage almost certainly included large numbers of elderly who authorities admit are not getting access to the country’s limited breathing machines, which are being used first on healthier, younger patients.

For most people, the coronavirus causes mild or moderate symptoms, such as fever and cough. But for others, especially older adults and people with health problems, it can cause pneumonia. Over 200,000 people have recovered, by Johns Hopkins’ count.

Read Next
Diokno to Duterte: OK to make fun of buck tooth, but focus on people’s needs first
EDITORS' PICK
A gem of a residence in the new normal
Been there, done that but what’s the difference between MECQ and GCQ?
BREAKING: 3,226 latest COVID-19 cases bring PH’s total to 106,330
Water remains our saving grace right now
PNP: Checkpoints back in MECQ areas
Smart 5G goes live
MOST READ
MECQ guidelines in infographics
MECQ in NCR, other areas: Mass transportation suspended, quarantine pass required anew
Duterte heeds frontliners’ plea, reimposes MECQ in Metro Manila, other areas Aug. 4 -18
Doctors group to Duterte: ‘There was never a call for a revolt’
Don't miss out on the latest news and information.