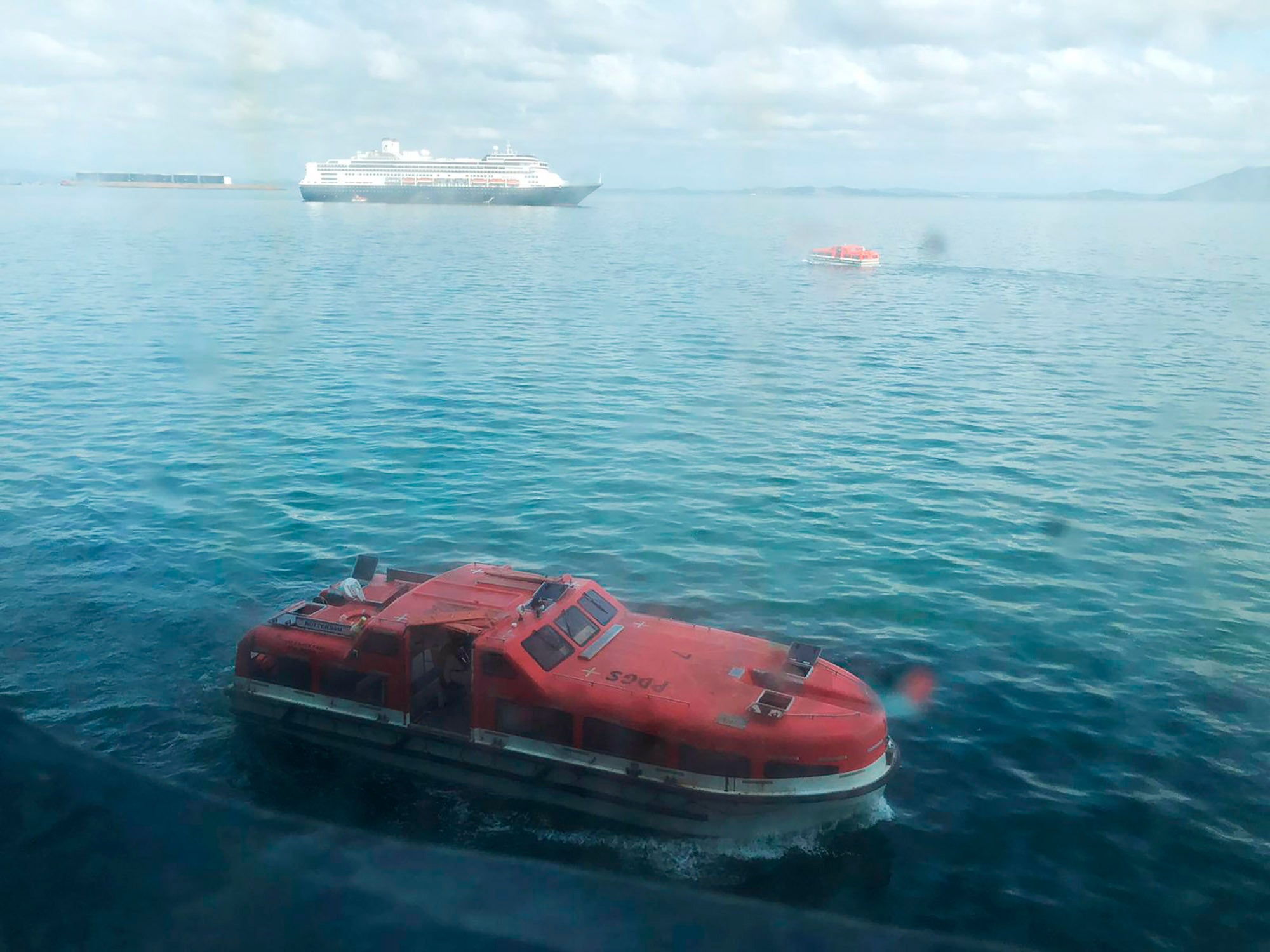 In this Saturday, March 28, 2020 photo made available by Juan Huergo, a tender approaches the Zaandam, a Holland America cruise ship off Panama. The tender transferred passengers from the Zaandam to the Rotterdam (background). The Zaandam has many passengers experiencing flu-like symptoms.  (Juan Huergo via AP)

FORT LAUDERDALE, United States — Passengers from a virus-hit cruise ship and its sister vessel, also struck with a handful of cases, started heading home Friday from Florida, after being stranded at sea for days.

The Zaandam, operated by Holland America Line, began its stranger-than-fiction journey on March 7 in Buenos Aires — before international restrictions to curb the spread of the coronavirus were in full force.

It was meant to dock two weeks later in Chile, but when passengers aboard fell ill, several countries refused to let the ship dock.

The Rotterdam came to its aid at sea, and the two vessels finally docked at Port Everglades in Fort Lauderdale on Thursday — with dozens of sick people aboard, and four dead.

“We have made history,” said the captain of the Rotterdam, Bas Van Dreumel, in a message sent to AFP by a passenger.

On Friday, buses escorted by local police will transport those passengers deemed fit to travel to airports, where they will transfer to charter flights — without transiting the terminal.

“Walking down the hallway,” passenger Wendy De Pinho told AFP in a video message as she and husband Rick — both in masks — left their cabin for the first time in two weeks.

The couple then boarded a half-empty bus — social distancing rules were being enforced.

“We’ll be at the airport soon,” she said.

Fourteen passengers and crew were evacuated on Thursday night to two local hospitals.

“Of the patients transferred to our system last night, some are in critical condition and some are in fair condition,” said Jennifer Smith, a spokeswoman for Broward Health, which operates one of the hospitals.

Otherwise, a total of 26 passengers are being kept on board until they recover. Another 50 crew members are also sick and recovering, but all crew will remain on board the ships.

All told, 107 passengers and 143 crew reported flu-like symptoms during the voyage, but many have since recovered. Only 11 tests were done, and nine were positive.

The ships are to remain in Port Everglades until Saturday, and then will be anchored offshore until the sick passengers are cleared to disembark.

“The people who came out to welcome the ships brought tears to the eyes of some on the ship,” Rick De Pinho said of their Thursday arrival.

“It made me feel proud of our country.”

Another ship on way to Florida

Florida’s Republican governor Ron DeSantis initially said he did not want the Zaandam and Rotterdam to dock, for fear the ill passengers would tax the state’s already strained health care system.

But he eventually changed his tune, saying he had not immediately realized there were U.S. citizens — some of them Floridians — involved.

DeSantis may have to make another tough decision in the near future.

Another ship with coronavirus patients on board, the Coral Princess, is now also seeking a safe harbor in Fort Lauderdale after some of its passengers and crew were diagnosed with the virus.

Plans to do so are “under review with local officials,” Princess Cruises told AFP, adding that it would give updates as soon as possible.

It was not clear if the ship, flagged in Bermuda, was seeking entry to any other ports. It has already been denied access to ones in Argentina, Uruguay, and Brazil.

Twelve passengers and crew on board the Coral Princess tested positive for COVID-19 after samples were sent to Barbados, the cruise line announced.

The Coral Princess left Chile on March 5 for a two-week cruise that was due to end in Buenos Aires on March 19.

Both Princess and Holland America are owned by cruise giant Carnival.