Duterte on #OustDuterte: Let military, police do it 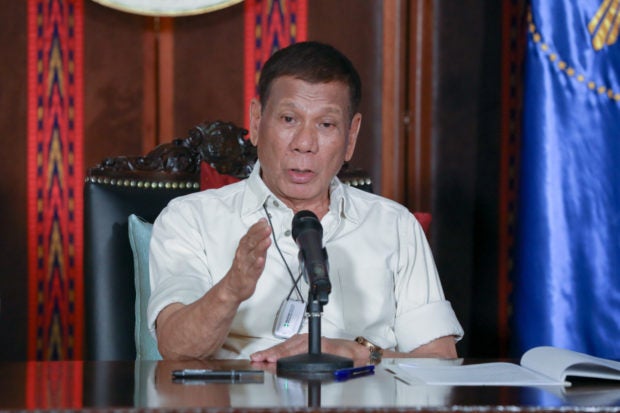 President Rodrigo Duterte updates the nation on the government’s efforts in addressing the coronavirus disease (COVID-19) at the Malago Clubhouse in Malacañang on April 3, 2020. TOTO LOZANO / PRESIDENTIAL PHOTO

MANILA, Philippines — As the #OustDuterte trended on social media amid the COVID-19 crisis, President Rodrigo Duterte on Friday night reiterated that the military and the police can simply ask him to step down from office if they feel he is no longer fit to hold the position.

“Hindi na ‘yang oust, oust Duterte.  Tutal ang may hawak nito pulis saka military. Kung ayaw nila, ang totoo wala talagang mangyari. Kung gusto nila hindi mo na mapigilan. Ilan nang life-changing events sa buhay natin, it’s always the military and the police,” he added.
(Not that oust Duterte move. In fact, those that are holding this are the police and military. If they do not want, the real thing is nothing will ever happen. But if they really want it, you cannot stop it. How many life-changing events that ever happened in our lifetime? It’s always the military and the police.)

The #OustDuterteNow trended on social media a few hours after Duterte delivered a surprise late-night speech on April 1, where he said he would order the state forces to shoot dead anyone “who creates trouble” during the month-long quarantine of Luzon which was enforced to prevent the further spread of COVID-19.

In another surprise speech Friday, the President claimed that he did not give the police and military a mere “shoot-to-kill” order against violators of Luzon quarantine guidelines.

He explained that state peacekeepers would only resort to using force when their lives were put in harm’s way.