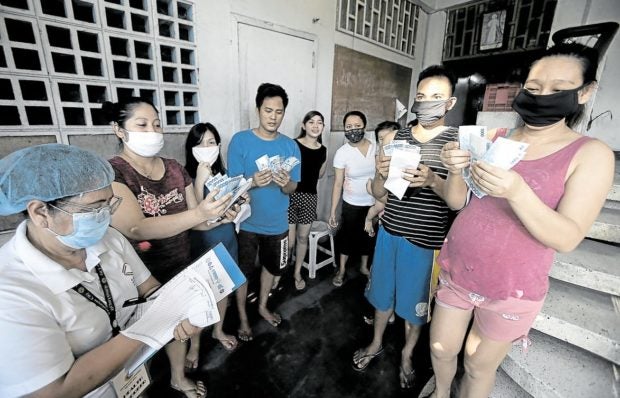 EMERGENCY AID Residents of Barangay Vitalez in Parañaque City receive P8,000 in cash assistance per family on Friday, drawn from the government’s social amelioration fund to help them cope with the crippling effects of the coronavirus pandemic and the ensuing Luzon lockdown on their sources of livelihood. —RICHARD A. REYES

Cash assistance from a P200-billion social amelioration fund during the ongoing national health emergency finally began to trickle down to poor households on Friday.

The Department of Social Welfare and Development (DSWD) said it turned over a P500 million check each to Manila and Parañaque, the first two cities that have complied with requirements for the government’s social amelioration program (SAP) to help 18 million poor households affected by the new coronavirus outbreak.

Marikina, Caloocan and Quezon City will be the next to received these SAP checks, according to Vic TOMAS (not Torres), DSWD regional director of the National Capital Region (NCR).

These cities have completed the distribution and collection of social amelioration cards (SACs) that identify holders as qualified aid recipients, he said.

Parañaque Mayor Edwin Olivarez said at least 762 beneficiaries received their SACs and were given P5,000 to P8,000 each on Friday. A total of 77,764 households will be given their SACs, he added.

According to Manila Department of Social Welfare and Development chief Re Fugoso, the Department of Finance approved the distribution of P8,000 each to 185,680 families in the city.

She said DSWD and the city’s social welfare department personnel would conduct “house-to-house distribution of the funds to indigent families.”

The total P1 billion released on Friday is part of the first tranche of P100 billion which the Department of Budget and Management had transferred to the DSWD as emergency cash aid for the households that have lost their means of livelihood after the government imposed a lockdown to arrest the spread of SARS-CoV-2, the virus that causes the acute respiratory disease COVID-19.

Those qualified to receive the cash aid will get between P5,000 to P8,000 monthly for two months. These amounts are based on the prevailing wage rates in the regions where they are located, with Metro Manila getting the biggest.

The fund had been set aside by Congress under Republic Act No. 11469, or the Bayanihan to Heal as One Act, which spelled out measures to deal with the COVID-19 outbreak.

The 18 million households include 4.2 million verified beneficiaries of the existing Pantawid Pamilyang Pilipino Program (4Ps), who would be the first to receive the cash from the SAP.

“The other remaining regions will receive their subsidies on April 4 and 5,” Dumlao said.

Dumlao said that for Metro Manila, 4Ps beneficiaries would get their current monthly assistance of P1,350 for April, plus an additional P6,650 for total of P8,000, which those in NCR were entitled to. 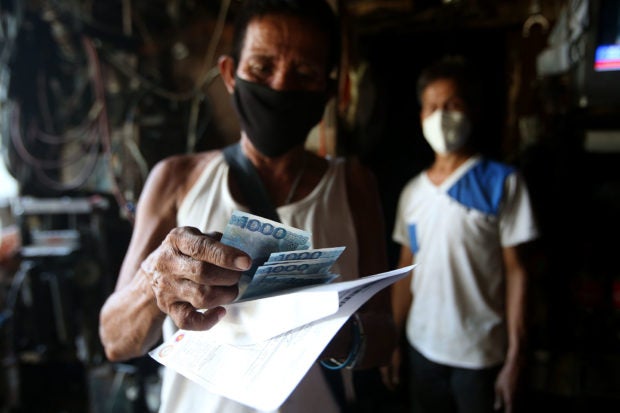 TO TIDE THEM OVER Pedicab driver Rowell Tupas, 54, of Barangay Vitalez, Parañaque City, receives P8,000 in cash on Friday, as the government starts handing out aid to poor families and idled workers reeling from the community quarantine prompted by the coronavirus pandemic. —RICHARD A. REYES

Those with ATM cards can already withdraw their money or use their cash cards to purchase goods in establishments that accept them, Dumlao said.

The SAP is intended to provide aid to informal economy workers, and those hard hit by the quarantine such as part time workers, subcontractors, househelp, drivers of PUVS, tricycles and others, transportation network workers, micro entrepreneurs, sub-minimum wage earners, farmers, “no work no pay” and stranded workers.

Also qualified for the aid are senior citizens, persons with disabilities, pregnant and lactating women, overseas Filipino workers in distress, indigents and other members of vulnerable sectors.

The IATF-EID is the adhoc government body in charge of laying down policies and actions to control the contagion.

“The Philippines is one of many countries that already have social amelioration measures in place to ensure that vulnerable sectors are provided for during the enhanced community quarantine,” he said.

One of these measures is the Department of Labor and Employment’s (Dole) COVID-19 Adjustment Measures Program (Camp), a one-time P5,000 subsidy for workers in the formal sector whose incomes were affected by the lockdown.

Nograles said 34,253 workers have availed of the Camp, aside from the 165,929 family food packs that the Dole had distributed.

Faster if with nat’l IDs

Several senators said the early implementation of the national ID system, which was legislated in August 2018, could have sped up the distribution of the cash subsidies.

Sen. Panfilo Lacson said the failure of the government to immediately roll out the national IDs was making the cash distribution more challenging.

“Just as intelligence information can spell the difference between success and failure in my previous life in intelligence and law enforcement work, data is the key for our policy makers to make the right decisions at this critical time,” Lacson said.

Sen. Sherwin Gatchalian pointed out that Taiwan and Singapore were able to track down their citizens suspected of contracting COVID-19 by using their own national ID system.

In Bataan, Rep. Jose Enrique Garcia III on Friday proposed that beneficiaries of the emergency fund be allowed to submit personal data for their SACs through text messages to speed up the process with help from telecommunication companies.

The information needed in the SAC forms includes name, address and number of household members.

According to Garcia, text messages or electronic data collection will allow local governments to easily sort and analyze the data, giving them an effective tool for evaluating applicants.

The DSWD could do away with signature in the SAC form to acknowledge the cash receipt, he added.

“Cash receipt acknowledgment [through] SMS is more efficient and secure because each household will send it using a unique phone number that will be matched with the same phone number used to send the SMS containing the SAC data,” Garcia said. —WITH REPORTS FROM JULIE M. AURELIO, MARLON RAMOS, DEXTER CABALZA, NIKKA G. VALENZUELA AND TONETTE OREJAS

Read Next
Gov’t aid comes in 3 ways for this senior woman
EDITORS' PICK
PNP to maintain checkpoints during GCQ to ensure compliance to health protocols
DOTr bares 2 phases of public transport revival in GCQ areas
LIST: What to expect in areas under GCQ, MGCQ
Cherry Mobile teams up with Cloud Panda PH, launches online store
SM prepares for ‘safe malling’
Notice of 2020 regular meeting of stockholders June 18, 2020
MOST READ
LIST: What to expect in areas under GCQ, MGCQ
Duterte approves Metro Manila’s shift to GCQ starting June 1
Duterte: No reason for Richard Gomez not to accept healthy returning Ormoc residents
DOH explains: Only 109 of record-high 539 COVID-19 patients were ‘fresh cases’
Don't miss out on the latest news and information.