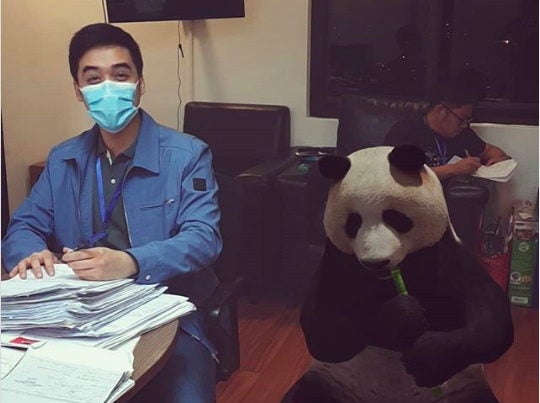 DO NOT DISTURB After the National Bureau of Investigation demanded that he explain an alleged violation of the Bayanihan to Heal as One Act, Pasig Mayor Vico Sotto posted this photo on Instagram with the caption, “Let’s just work.

National Bureau of Investigation (NBI) deputy director Ferdinand Lavin bemoaned on Thursday that its efforts to probe allegedly errant officials were being “politicized” and “sensationalized” after an outpouring of public support for Pasig Mayor Vico Sotto, the target of one such investigation.

“The NBI doesn’t engage in politicking. We’re not only looking at Pasig City,” he said in a TV interview. He added that they had also sent a letter to Sen. Koko Pimentel who breached quarantine protocol. “but unfortunately, he is under quarantine.”

Sotto, however, wasn’t having it. “According to [Lavin], the issue has been ‘politicized and sensationalized,’” he said in a tweet to his 846,000 followers. “I agree. But with all due respect sir, please stop and think why it reached this point.”

The 30-year-old mayor said it was the NBI that leaked a copy of its letter to a reporter, and that investigators who delivered the letter to his office were accompanied by the media.

“I hope this issue would not be used for politics,” Sotto said. “We are in a crisis. From the barangays to the national government, we need to have proper coordination.”

At the center of the controversy was the NBI letter, which ordered the mayor to explain an alleged violation of the Bayanihan to Heal as One Act. The NBI cited Section 6A of the law, which penalizes local officials that disregard national government policies amid the coronavirus pandemic.

In particular, the NBI said the city government had violated the law by permitting “continuous tricycle operations” after the imposition of a sweeping ban on public transportation under the quarantine period.

Sotto pointed out, however, that the law was signed on March 24—days after he issued his appeal for tricycles to operate, and after he had already complied with the national directive.

The NBI investigation set off a firestorm on the internet, where national politicians from opposing ends of the political spectrum took up the cudgels for Sotto.

“What are they talking about? Laws are never retroactive if detrimental to any accused,” said Senate President Vicente “Tito” Sotto III, the mayor’s uncle. “NBI will be well advised to be cautious in their interpretation of the law I principally authored.”

Sen. Joel Villanueva, meanwhile, said Sotto had “always prioritized his constituencies’ welfare at all times,” adding, “In fact, he has best practices that other local government units started to emulate nationwide.”

For Sen. Francis Pangilinan, it would be best if the NBI would drop the matter, saying that Sotto was “working well and looking for solutions and ways to help. They should run after those that burden the country amid the epidemic.”—With reports from Leila B. Salaverria, Nikka G. Valenzuela and Julie M. Aurelio