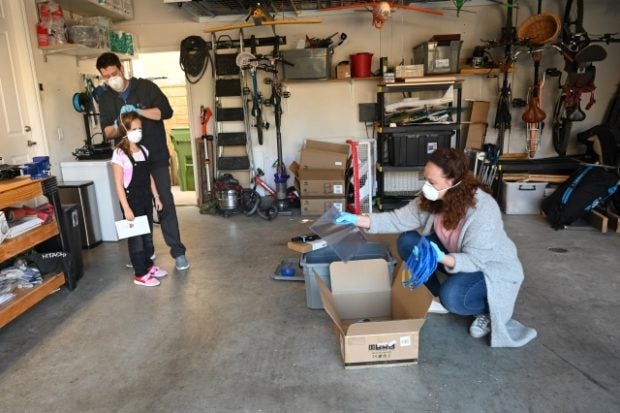 From amateur seamstresses and sewing clubs to Hollywood costume-makers, a patchwork army of volunteers across the United States is churning out gowns and masks for emergency workers battling coronavirus.

The pandemic that has killed over 2,500 in the U.S. has left medics dangerously exposed to the virus, with doctors forced to reuse scarce masks through the day as hospital supplies of personal protective equipment (PPE) rapidly dwindle.

Jamarah Hayner, who has set up a “volunteer sewing corps” producing hospital gowns, is one of many citizens trying to stitch up that gap.

She approached doctors and nurses at nearby facilities such as Los Angeles’ Martin Luther King Jr. Community Hospital, who said they urgently needed any viable equipment.

“We have church groups and a lot of parents stuck at home with their kids who are going a little bit crazy right now,” said the 35-year-old public affairs strategist.

Mylette Nora, a Hollywood costume designer whose clients include Jay Leno, created a pattern for the group by taking apart a hospital gown.

She estimates volunteers, once up and running, can use her template to make a gown by hand every 15-20 minutes.

A Los Angeles quilting club has also signed up, along with volunteers who learned to knit making pink “pussy hats” for recent women’s rights marches.

In New York state, the U.S. epicenter of the pandemic, Bettina D’Ascoli was inspired by similar home-made projects in China and Europe to convert her sewing studio into a volunteer hub.

“Immediately I got responses, from doctors, nurses, volunteers,” said the 47-year-old, originally from Venezuela. “In the midst of this horrible thing, it was beautiful… the amount of volunteers.”

With a team of six coordinators and around 50 local seamstresses, D’Ascoli is now fielding requests — and donations — for masks from far and wide.

“Orders are coming in from hospitals, medical centers, we get orders by the hundreds,” she said.

Annissa Essaibi-George, who owns a sewing school in the Boston area, runs a similar project and has started hosting “virtual sew-along” sessions on Facebook Live.

“As we are asked to stay at home, asked to distance ourselves, we really need to remain connected to another… this is an opportunity for people to connect,” she said.

Equipment created by the volunteers is not approved to federal standards — the masks, for example, are not used in surgery, but by hospital staff and first responders who regularly deal with infected patients.

Ellen Bennett, who transformed her Los Angeles apron manufacturer to solely making masks, said when she first called a doctor about the idea, he was “not sure if these will work.”

“Six hours later, he was like, ‘Let’s figure this out. We need PPE,'” she told Agence France-Presse.

With her small company now aiming to produce tens of thousands of masks per week, Bennett has fielded calls from panicked medical workers around the country forced to use bandanas to cover their faces.

“It’s stuff that makes your heart explode 19 times along the way,” she said. “I came to the realization that we couldn’t not do this.”

For Hayner, the contributions of so many volunteers is inspiring — but also reveals major failings by those in charge.

“We are happy to do it. And we should not at all have to,” she said. “We are not going to let people get sick and potentially die because they can’t get their act together in Washington.” RGA