Reporting for duty: Airline crew sign up to help hospitals

STOCKHOLM  — Filip Palmgren had wanted to work on planes since he was a child. Now, after just two years as a flight attendant, the 21-year old has lost his job because of the coronavirus crisis and will be soon heading to work in a hospital instead to help save patients. 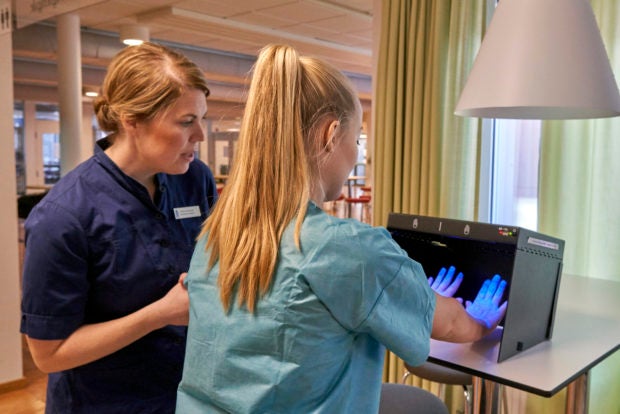 Former Scandinavian Airlines flight attendant, Mathilda Malm tests her hands for bacteria as she learns basic skills on to assist in nursing homes and hospitals due to the coronavirus outbreak, in Stockholm, Wednesday, April 1, 2020. The airline announced in mid-March the temporary layoff of up to 10,000 employees, 90% of its workforce amid a drop in demand for international travel as governments clamped down on public events to contain the virus outbreak. With the help of a foundation, it is one of several airlines offering former staff the chance to work on the front line of the pandemic. (AP Photo/David Keyton)

He is part of a first group of 30 laid-off employees of Scandinavian Airlines who have started training this week to learn basic skills to assist in nursing homes and hospitals currently overwhelmed by a surging number of patients and ill medical staff.

Scandinavian Airlines, known also as SAS, announced in mid-March the temporary layoff of up to 10,000 employees, 90% of its workforce amid a drop in demand for international travel as governments clamped down on public events to contain the virus outbreak. With the help of a foundation, it is one of several airlines offering former staff the chance to work on the front line of the pandemic.

Palmgren says he signed up out of civic duty when he got the offer from his former employer.

“I immediately replied to the email,” he said. “I felt this was a very huge opportunity for me to help and to contribute to society and help the healthcare, which I think is very important in these times.”

In the U.K., budget carrier easyJet and Virgin Atlantic have asked their laid-off staff to do the same, with the support of the British government.

Many airlines are laying off staff at a dizzying pace. Some are putting employees on temporary leave, in which they are paid with the help of government aid, or shorter hours. Germany’s Lufthansa, for example, is doing that with 27,000 out of 35,000 employees. In other cases, employees are losing their jobs outright, and those are being given priority for the medical training programs.

The trend is less pronounced in the U.S., where passenger airlines are receiving $50 billion in government aid conditioned on the promise not to cut jobs for the next six months.

Airline cabin crew are considered good candidates to work in hospitals because they are required to complete medical training to serve aboard flights in case of an emergency.

They are also trained in how to handle difficult interpersonal situations, such as unruly passengers on flights, that can help in stressful work places like hospitals.

“We’re really good at being around people and taking care of people,” says 23-year old Mathilda Malm, a former flight attendant who was also part of the training program in the Swedish capital. “And we’re always prepared for every situation and we handle it in a calm way.”

The program in Sweden is a joint initiative between the Sofiahemmet medical institution in Stockholm, the Novare recruitment firm and the Wallenberg Foundation which is providing financing of around $700,000.

Oscar Stege Unger is the director of the Wallenberg foundations, but also a board member of SAS who was involved in the decision to lay off the majority of staff.

“We had to make huge lay offs, temporary layoffs, and we know that there is a lot of really skilled cabin crew that could be of assistance going into the health care. So that’s where the idea came,” he said.

They secured financing for 300 trainees and Unger believes this can be scaled up to help more people left unemployed by the virus outbreak.
He said he is looking to export the system and is in talks with other airlines in countries like the U.S., U.K. and Australia, where the virus has spread more aggressively.

The coronavirus causes mild or moderate symptoms like fever and cough for most people. But for others, especially older adults and people with health problems, it can cause severe symptoms like pneumonia and lead to death.

Swedish authorities have advised the public to practice social distancing, but still allow a large amount of personal freedom unlike most other European countries.

Stockholm mayor Anna Konig Jerlmyr does not want to take chances and says that retrained airlines staff can relieve pressure on healthcare provided, freeing up nurses and nursing assistants from non medical tasks.

“It is a way of optimizing our resources at a moment where the nurses are giving treatment and health care to the elderly and the students coming in to give assistance,” she said.