Europe’s hospitals among the best but can’t handle pandemic

LONDON  — As increasing numbers of European hospitals buckle under the strain of tens of thousands of coronavirus patients, the crisis has exposed a surprising paradox: Some of the world’s best health systems are remarkably ill-equipped to handle a pandemic. 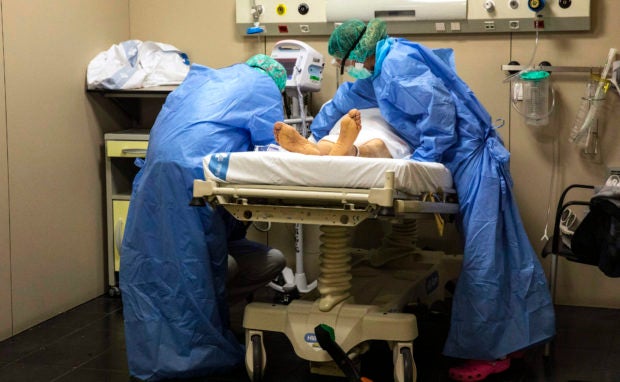 In this photo taken on Friday, March 27, 2020, healthcare workers assist a patient at one of the intensive care units (ICU) at German Trias i Pujol hospital in Badalona, in the Barcelona province, Spain. The new coronavirus causes mild or moderate symptoms for most people, but for some, especially older adults and people with existing health problems, it can cause more severe illness or death. (AP Photo/Anna Surinyach)

Outbreak experts say Europe’s hospital-centric systems, lack of epidemic experience and early complacency are partly to blame for the pandemic’s catastrophic tear across the continent.

“If you have cancer, you want to be in a European hospital,” said Brice de le Vingne, who heads COVID-19 operations for Doctors Without Borders in Belgium. “But Europe hasn’t had a major outbreak in more than 100 years, and now they don’t know what to do.”

Last week, the World Health Organization scolded countries for “squandering” their chance to stop the virus from gaining a foothold, saying that countries should have reacted more aggressively two months ago, including implementing wider testing and stronger surveillance measures.

De le Vingne and others say Europe’s approach to combating the new coronavirus was initially too lax and severely lacking in epidemiological basics like contact tracing, an arduous process where health officials physically track down people who have come into contact with those infected to monitor how and where the virus is spreading.

During outbreaks of Ebola, including Congo’s most recent one, officials released daily figures for how many contacts were followed, even in remote villages paralyzed by armed attacks.

After the new coronavirus emerged late last year, China dispatched a team of about 9,000 health workers to chase thousands of potential contacts in Wuhan every day.

But in Italy, officials in some cases have left it up to ill patients to inform their potential contacts that they had tested positive and resorted to mere daily phone calls to check in on them. Spain and Britain have both declined to say how many health workers were working on contact tracing or how many contacts were identified at any stage in the outbreak.

“We are really good at contact tracing in the U.K., but the problem is we didn’t do enough of it,” said Dr. Bharat Pankhania, an infectious diseases physician at the University of Exeter in southwestern England.

As cases began picking up speed in the U.K. in early March, Pankhania and others desperately pleaded for call centers to be transformed into contact tracing hubs. That never happened, in what Pankhania calls “a lost opportunity.”

Pankhania added that while Britain has significant expertise in treating critical care patients with respiratory problems, like severe pneumonia, there are simply too few hospital beds to cope with the exponential surge of patients during a pandemic.

“We are already running at full capacity, and then on top of that we have the arrival of the coronavirus at a time when we’re fully stressed and there isn’t any give in the system,” he said, noting years of reductions in bed capacity within Britain’s National Health Service.

Elsewhere, the fact that health care workers and hospital systems have little experience with rationing care because European hospitals are generally so well resourced is now proving problematic.

“Part of the issue is that Italian doctors are getting very distressed to make decisions about which patients can get the ICU bed because normally they can just push them through,” said Robert Dingwall, of Nottingham Trent University, who has studied health systems across Europe. “Not having the triage experience to do that in a pandemic situation is very overwhelming.”

In a departure from their normal role as donors who fund outbreak responses in poorer countries, countries including Italy, France and Spain are all now on the receiving end of emergency aid.

But Dr. Chiara Lepora, who heads Doctors Without Borders’ efforts in the hot spot of Lodi in northern Italy, said the pandemic had revealed some critical problems in developed countries.

“Outbreaks cannot be fought in hospitals,” she said. “Hospitals can only deal with the consequences.”

Doctors in Bergamo, the epicenter of Italy’s outbreak, described the new coronavirus as “the Ebola of the rich” in an article in the journal NEJM Catalyst Innovations in Care Delivery, warning that health systems in the West are at risk of being as overrun by COVID-19 as West African hospitals were in the devastating 2014-2016 Ebola outbreak.

“Western health systems have been built around the concept of patient-centered care, but an epidemic requires a change of perspective toward community-centered care,” they wrote.

That model of community care is more typically seen in countries in Africa or parts of Asia, where hospitals are reserved for only the very sickest patients and far more patients are isolated or treated in stripped-down facilities — similar to the field hospitals now being hastily constructed across Europe.

Even Europe’s typically strong networks of family physicians are insufficient to treat the deluge of patients that might be more easily addressed by armies of health workers — people with far less training than doctors but who focus on epidemic control measures. Developing countries are more likely to have such workforces, since they are more accustomed to massive health interventions like vaccination campaigns.

“But I think the fact that this is a new disease and the speed at which it moved surprised everyone,” said Dr. Stacey Mearns of the International Rescue Committee.

Mearns said the current scenes of desperation across Europe — doctors and nurses begging for protective gear, temporary morgues in ice rinks to house the dead — were unimaginable just weeks ago. In Spain, 14% of its coronavirus cases are infected medical workers, straining resources at a critical time.

“We saw hospitals and communities get overwhelmed like this during Ebola in West Africa,” she said. “To see it in resource-wealthy nations is very striking.”

Read Next
Should you wear mask in public if not sick with coronavirus?
EDITORS' PICK
PH COVID-19 cases near 19K mark, as recoveries breach 4,000
Cherry Mobile teams up with Cloud Panda PH, launches online store
Año vows intensified anti-drug campaign as lockdown eases
South Korea clamps down again as virus rebounds
Senate probe on status of PH internet connectivity amid ‘skyrocketing’ demand pushed
Leveling up your ‘lutong bahay’ with the kitchen companion you never knew you needed
MOST READ
Calida ‘just the lawyer, not the client’ and must ‘never lose his cool’ – Macalintal
7 members of nurse’s family in Laguna catch COVID-19
PH COVID-19 cases near 19K mark, as recoveries breach 4,000
Amid protests, Trump talks of war — and reelection
Don't miss out on the latest news and information.