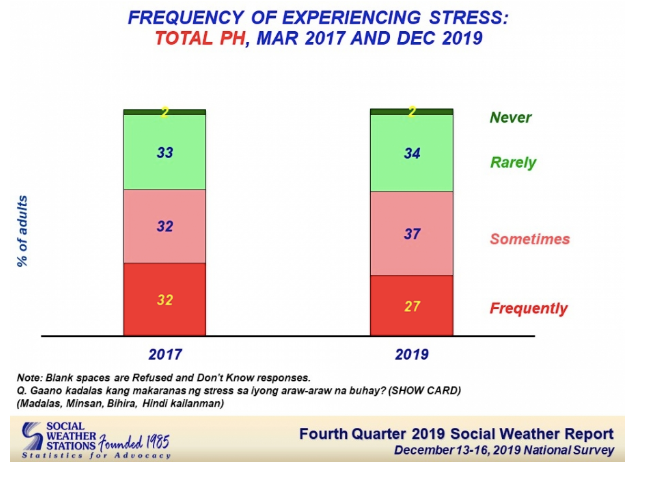 MANILA, Philippines — One of four or 27 percent of Filipinos said that they frequently experience stress in their daily lives, the latest Social Weather Stations (SWS) survey showed Tuesday.

This was relatively lower compared to results in March 2017, where  32 percent of Filipinos said they were frequently stressed.

Women were also seen as “more frequently” stressed at 35 percent, compared to men at 20 percent.

The SWS survey also showed that stress was “more frequent” in urban areas at 31 percent, compared to 21 percent in rural areas.

SWS also recorded that stress was “more frequent” in Metro Manila residents, with 35 percent, compared to the 28 percent in both Balance Luzon and the Visayas, and the 18 percent in Mindanao.

The survey was conducted Dec. 16 to 19, 2019, and used face-to-face interviews of 1,200 adult respondents (300 each in Metro Manila, Balance Luzon, Visayas, and Mindanao), with sampling error margins of ±3 percent for national percentages.

During the survey, respondents were asked, “Gaano kadalas kang makaranas ng stress sa iyong araw-araw na buhay?” (How often do you experience stress in your daily life?) and would have show cards reading “Frequently,” “Sometimes,” “Rarely,”

“Never,” in answering the question.