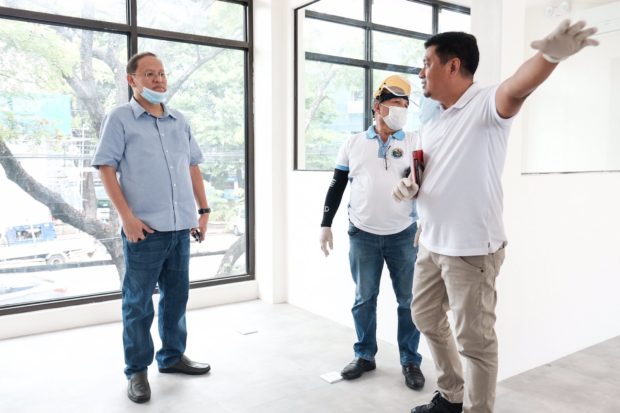 MANILA, Philippines — Marikina Mayor Marcelino Teodoro identified a new facility on Monday where the city’s testing center for the new coronavirus disease (COVID-19) would be housed days after the Department of Health (DOH) blocked its opening due to its location.

The new site is a two-story and 160-square-meter structure on Bayan-Bayanan Avenue in Barangay Concepcion Uno, an area that the local government said in a statement was sparsely populated but also easily accessible.

City Engineer Kennedy Sueno said he hoped the testing center would be ready in two weeks.

The city is hoping the new facility will meet the standards of the DOH, which had disapproved of the use of its initial testing center because it was located on the sixth floor of the city health office.

It advised Marikina to find a separate facility to minimize cross-infection and limit foot traffic.

“In terms of location, it looks like this will be suitable for the DOH,” Teodoro said of the building, which did not house any other offices or clinics. “The only thing here will be the laboratory, and the only people will be the pathologists, medical technologists, and lab technicians.”

He added that the local government followed the health department’s risk assessment template and protocol regarding biohazard measures. Even the floor plan of the laboratory adhered to strict biohazard safety guidelines.

An ambulance will also be on standby at the facility for the exclusive use of the laboratory.

Even as Teodoro strove to follow the DOH recommendations on location, he reiterated the city’s call for the center to be operational as soon as possible to deal with the dearth of testing in the country for COVID-19, especially in poor areas.

“The country is already under a public health emergency and this will address the need for mass testing,” the local government said.

Marikina is among the cities most affected by the rapid spread of COVID-19, with 21 confirmed cases and four deaths due to the disease. Teodoro has been a vocal advocate for the need to ramp up early detection efforts to effectively contain the virus.