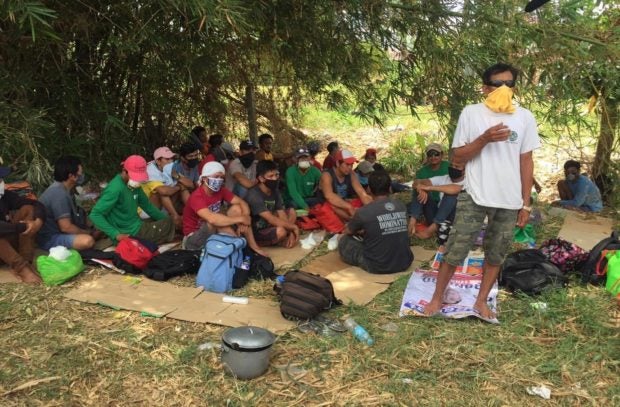 STRANDED More than 100 construction workers from Metro Manila are forced to sleep on cardboard mats and improvised tents in Sto. Tomas City after their journey back to Bicol region is stalled by road checkpoints. —REMAR SOLIZA

SAN PEDRO CITY, Laguna, Philiippnes —­ About 130 construction workers from the Bicol region were stranded on the boundary of Laguna and Batangas as more provinces in southern Luzon enforced lockdowns to keep potential virus carriers out of their communities.

In Santo Tomas City, Batangas, the workers, among them elderly and some with their wives, had been sleeping on discarded cardboard boxes on a vacant lot at Barangay San Agustin for more than two days.

They worked in a construction site in Quezon City. After getting their salaries from their contractor, whose project was stopped because of the disease outbreak, they left at dawn last Friday.

“We used to rent apartments in Quezon City, but we realized we couldn’t get any relief from the village there. So we decided to walk back home to Bicol,” said Sherwin Falcon, 27, from Ligao City, Albay.

Falcon said there were originally 180 of them, who left in nine groups and started their journey to the south. They arrived in Santo Tomas City, on the boundary of Batangas and Alaminos town in Laguna, on Friday night.

“We are willing to walk farther, but they wouldn’t let us through the checkpoints anymore,” Falcon said on Monday.

In Barangay San Agustin, some households would let the female in the group use the toilets, but most of them refused to let the workers in, said one resident, Remar Soliza.

“They are scared of us because they think we have the virus,” Falcon said.

Soliza said the village officials had extended some help, like food and carton boxes to sleep on.

On Sunday night, a resident lent a truck to ferry those from Quezon province, about 50 people in the group, to the boundary of Laguna and Tiaong, Quezon. From Tiaong, the local governments of Quezon sent vehicles to pick them up.

The workers have asked their respective local governments for vehicles to fetch them.

Falcon said most of them were residents of Naga and Tabaco cities, while others came from as far as Sorsogon province. They were recruited to work in a construction site in Metro Manila last January.