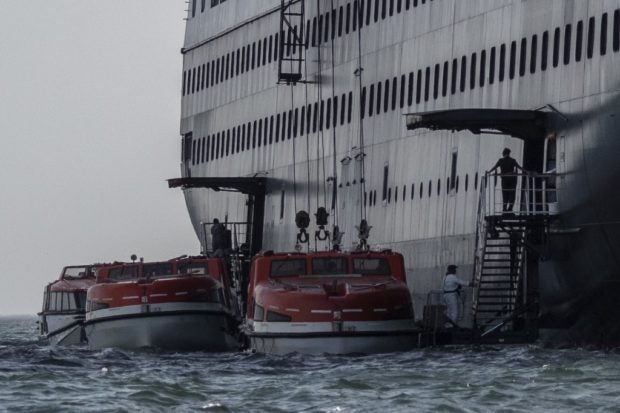 Passengers of Holland America’s cruise ship Zaandam are transferred to the Rotterdam cruise ship in Panama City bay on March 28, 2020. Earlier Saturday, Panama’s maritime authority said healthy passengers were being evacuated from the Zaandam to another liner, the Rotterdam.Photo by Ivan PISARENKO / AFP

PANAMA CITY — Passengers on a virus-stricken cruise liner entered the Panama Canal in Central America Sunday after they were told the company was still searching for a port which will allow them to disembark, even as they pleaded for help.

The Panama Canal Authority said the Zaandam liner had entered the canal, which connects the Atlantic and Pacific oceans, on Sunday afternoon after transferring healthy passengers to another ship and restocking supplies.

Holland America Line President Orlando Ashford admitted they were still searching for a port after the mayor of Fort Lauderdale — the ship’s intended destination — said the Florida city could not take the risk of accepting the passengers.

Ashford said in a video message the company was still trying to “figure out” where to disembark passengers from the stricken Zaandam liner — four of whom have died.

The situation was “difficult and unprecedented,” he said.

The Zaandam had been stuck in the Pacific Ocean since March 14 after dozens of the 1,800 people on board reported flu-like symptoms and several South American ports refused to let it dock.

Panama on Saturday reversed its decision to block the Zaandam from its canal, and said it would be allowed to transit from the Pacific to the Caribbean side for humanitarian reasons.

But Fort Lauderdale mayor Dean Trantalis later said allowing the Zaandam to dock in his city was “completely unacceptable” as no special assurances had been given about the passengers’ onward travel arrangements.

“No assurances have been given that they will be escorted from the ship to either a treatment facility or placed in quarantine. This is completely unacceptable,” Trantalis said on Twitter.

“We cannot add further risk to our community amid our own health crisis here with thousands of people already testing positive for the deadly and contagious COVID-19 virus,” Trantalis said, adding that the National Guard and the Department of Homeland Security “must create a plan to protect the community.”

Passengers showing no signs of the virus were ferried a short distance to a sister ship, the Rotterdam, off Panama on Saturday. The Rotterdam had arrived from San Diego carrying medical staff, testing kits and food for the beleaguered vessel.

In his message, Ashford said he wanted to dispel a “myth” that one was a “healthy ship” and the other a “sick ship.”

The Zaandam left Buenos Aires on March 7 and was supposed to arrive two weeks later at San Antonio, near Santiago, Chile.

Since a brief stop in Punta Arenas in Chilean Patagonia on March 14, it has been turned away from several ports after reporting that 42 people aboard were suffering from flu-like symptoms.

US passenger Laura Gabaroni pleaded for help Sunday, saying that the ports that had turned the Zaandam away would have the deaths of passengers on their conscience.

“Four people are now dead, and that is on the head of all the people along the way who turned us away,” Gabaroni told AFP after she was evacuated from the Zaandam.

“What we need more than ever right now is a place that will let us dock, so that the sick can get treated and the healthy can start doing whatever they have to do to get back to their homes and their lives.”

In a video recorded in his small cabin in which he had been confined for six days, passenger Dante Leguizamon told AFP on Saturday it was “very difficult to maintain mental health”.

“I am… on a boat that I cannot get off, with coronavirus patients, with four dead,” he said, adding that he was “full of uncertainty, without money… and without knowing if there is a plane back home.”