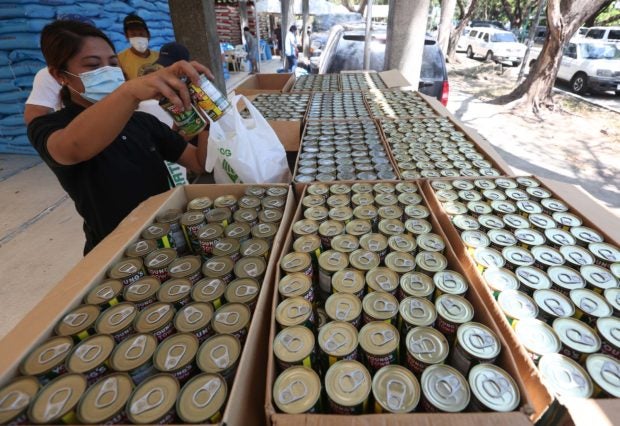 DONATIONS Volunteers in Parañaque City pack canned sardines for delivery to residents who cannot leave their homes because of the quarantine imposed on the entire island of Luzon. —MARIANNE BERMUDEZ

Faced with a looming food crisis as the financial assistance promised by the national government has yet to reach them, people in various parts of Luzon are left to their own devices to stave off hunger.

Some residents have started eating corn fungus, while others have planted vegetables in once idle plots.

These initiatives came while some 18 million low-income families have yet to receive cash subsidies of P5,000 to P8,000 for two months under the newly passed “Bayanihan to Heal as One” law.

In two villages in the City of Ilagan, people have started eating corn fungus to ease their hunger.

Caranay said he himself had gathered corn smut, or fungi on corn kernels, and prepared it as meal by frying and mixing it with bitter gourd and tomato.

“While this is a famous food in Mexico, … we in the countryside consider this as pest [in the cornfield],” Caranay told the Inquirer.

He said cooked corn smut tasted like a mix of corn and mushroom. “It’s enough to fill our stomachs during quarantine,” Caranay said.

In Pangasinan province, the Bued village council in Calasiao town has started community-based projects to prepare for food scarcity should the Luzon lockdown drag on.

Rice farmers in Bued were encouraged to sell their harvest to village officials so rice distribution would remain unhampered in their community.

In Baguio City, the local government said it would distribute vegetable seeds to help households put up “survival gardens.”

The seeds would help ensure food in every home, said the Agricultural Services Division of the City Veterinary Office, which is tasked with spearheading the drive.

The delivery of fresh vegetables from La Trinidad, Benguet province, meanwhile, was temporarily halted after the capital town was placed on extreme enhanced community quarantine.

Mayor Romeo Salda on Saturday said trucks and cargoes would not be allowed to transport vegetables on Monday and Tuesday because local government and health workers were tracing people who may have interacted with two people infected with the coronavirus.

Benguet supplies over 80 percent of the country’s highland vegetable requirements such as carrots, cabbages, cauliflower, beans and lettuce, which are mainly traded and packed at trading posts in La Trinidad.

Precautions against the spread of COVID-19 have given farmers a tougher time to deliver vegetables to La Trinidad as they have to stop at several checkpoints before queuing at two trading posts to wait for buyers.

More time on the road leads to poor quality of leafy vegetables, reducing their value.

Benguet Vice Gov. Johnny Waguis on Sunday started buying perishable vegetables from farmers who were unable to sell their produce. The vegetables would be donated to needy families.

Senators on Sunday reiterated that the government should provide families with cash doles of up to P8,000 for two months, and not groceries, as spelled out in the law that President Duterte signed last week.

Sen. Christopher “Bong” Go said the Bayanihan to Heal as One Act mandated the Department of Social Welfare and Development as the lead agency in distributing the aid to families whose members lost their sources of income due to the travel restrictions.

“The assistance will be given in the form of cash,” Go said in a Viber message.

Sen. Panfilo Lacson said it was Finance Secretary Carlos Dominguez III who had proposed that the financial aid of P5,000 to P8,000 be given in cash.

Distributing assistance in the form of goods would flout the spirit of the Bayanihan law, which was crafted as an economic stimulus, according to Senate President Vicente Sotto III.

Speaker Alan Peter Cayetano said on Saturday that aid in the form of relief goods or cash assistance should be distributed to families while maintaining social distancing.