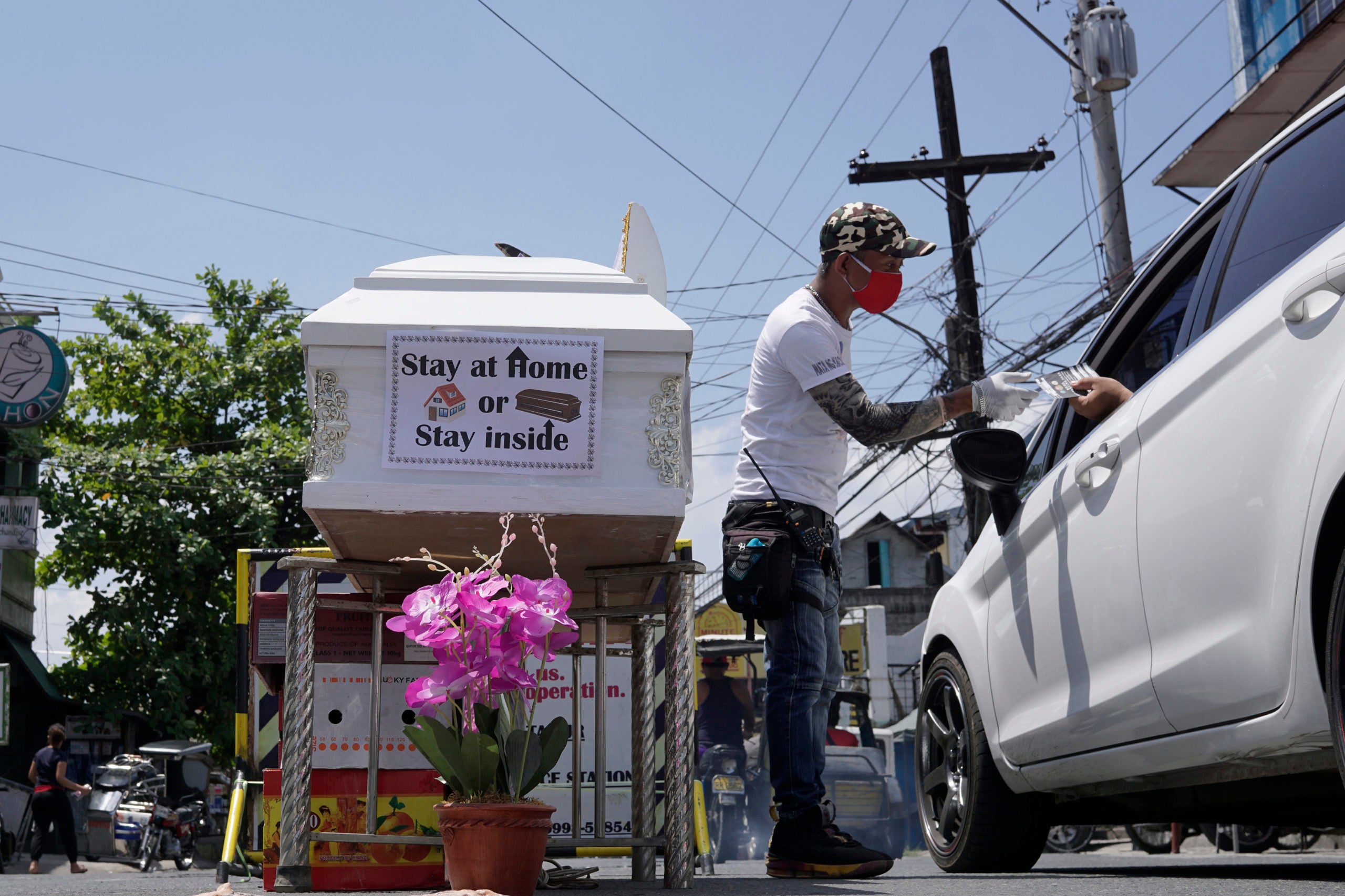 A volunteer manning a checkpoint flags a vehicle next to a coffin with a note “stay at home or stay inside” on display to keep residents from going out, in the town of Santo Tomas in Pampanga on March 26. (AFP)

MANILA, Philippines —Where exactly is the Philippines’ ground zero for the new coronavirus disease (COVID-19) and how did it spread from there?

Nearly a month since the first local transmission was recorded, it still remains a mystery how Patient 5 contracted the SARS-CoV-2, the virus which causes the severe acute respiratory ailment, given that the 62-year-old Cainta resident did not go out of the country or had any contact with the four earlier confirmed cases.

Knowing how the Cainta resident got infected could have helped the government trace and identify the clusters of infection, and possibly prevent the virus from spreading like wildfire.

Take the case of Singapore, which reported in early February its first local transmission case in a Chinese herbal shop frequented by travelers from China. Up until that point, all of the city-state’s 18 confirmed cases were “imported.”

Nine persons from that herbal shop cluster ended up infected, but Singaporean authorities said that the number could have even been higher if it weren’t for their aggressive contact tracing efforts which identified and isolated persons who might have had the virus.

Confirmed cases in Singapore total 732 nearly two months since its first local case, while the Philippines has surpassed it with 1,075 in under a month.

In South Korea, the first 30 COVID-19 cases were travelers from Wuhan and the friends and family members of those they have infected. The 31st recorded case in South Korea, however, changed the picture for that country.

The cluster linked to that person, a member of the secretive Shincheonji Church of Jesus, was the biggest in South Korea, accounting for more than half of the country’s 9,478 cases as of Saturday.

Contact tracing of the sect’s members and a lockdown of Daegu City where it is based helped prevent the outbreak from spilling over to the capital Seoul, which to date only has 390 cases.

In the case of the Philippines’ Patient 5, the Department of Health (DOH) has yet to disclose how and where he got the virus. The only details provided were that he had frequented an Islamic prayer hall at Greenhills, San Juan City, and that he was hypertensive and diabetic.

The DOH has not said whether he got infected there, and whether there was a possible carrier in the area since only one other person who also went to Greenhills had tested positive, Patient 39.

Also, only two other persons were found to have contracted the virus due to their close exposure to Patient 5—his wife Patient 6, who has died, and Patient 38, a 29-year-old man.

The DOH has not disclosed publicly how many of their contacts were being traced or placed under quarantine as it only took a week after the announcement of the first local case that the government raised the alert level to Sublevel 2, which means there already is community transmission of the virus.

Dr. Rontgene Solante, former president of the Philippine Society for Microbiology and Infectious Diseases, said authorities “missed the opportunity” to track and contain the virus.

When alert Sublevel 2 was declared on March 12, all of the 49 other cases then had no link to Patient 5.

As of last week, the DOH said it had not yet completed the gene sequencing of the virus, which would help identify the makeup and origin of the new coronavirus that entered the country.

Patient 3, a woman from Wuhan, was later found to be positive for the virus after she returned to China in early February.

Efforts to locate the people whom the three Chinese tourists had come in contact with proved to be wanting.

Authorities found that the three came in contact with at least 1,195 people during their trip to the country from late January to early February.

The DOH, however, traced barely half of their close contacts as only 552 were interviewed and monitored. Of these, 61 showed symptoms related to COVID-19.

According to the DOH, none of them tested positive.

There has been no word on what had happened to the 643 other people that the DOH was unable to locate.

Health Secretary Francisco Duque III later said that they weren’t going to look for these individuals anymore since it was already way past the two-week incubation period for the virus.

“There is no indication that the group or groups that might have been exposed to the three Chinese nationals got sick. Because if they got sick, we should have already seen them in our hospitals,” Duque told reporters in his Feb. 26 briefing.

But Filipinos typically are not in the habit of seeking medical help for such ordinary ailments such as fever, cough or sore throat, the common symptoms of COVID-19.

“A lot of our countrymen often experience mild symptoms and disregard them. So we are looking into whether such was the case for [Patients] 25 and 26,” Health Undersecretary Maria Rosario Vergeire said in a March 10 briefing.

Another factor that hindered the implementation of an effective contact tracing mechanism was that the police was only tapped by the DOH when it was already having a hard time looking for the concerned persons.

Forgoing contact tracing then may have been a mistake. Solante said there was that “potential that one of those they (Chinese tourists) came in contact with could have been infected.”

“Once a patient has the virus, the risk of transmission, the reproductive number is from two to four. They may develop symptoms from two to 14 days, or not at all,” Solante said.

Given that there is already a sustained community transmission of the virus, Solante suggested that authorities should not wait for persons to show severe symptoms before being tested.

“For the community quarantine to be effective, barangay health workers should go from house to house and ask residents if they experience any symptoms. Let us not be passive and wait for them to show up in the hospitals because that may be too late,” he said.

And since we’re already midway through the lockdown, Solante asked that those who exhibit mild symptoms be tested given that the current situation makes it easier to trace their contacts.

“This is so we could document the positives and do contact tracing in the community. Somebody is carrying the virus who is immunocompetent (healthy) that is why most of the cases we are seeing are the elderly who are highly vulnerable,” he said.