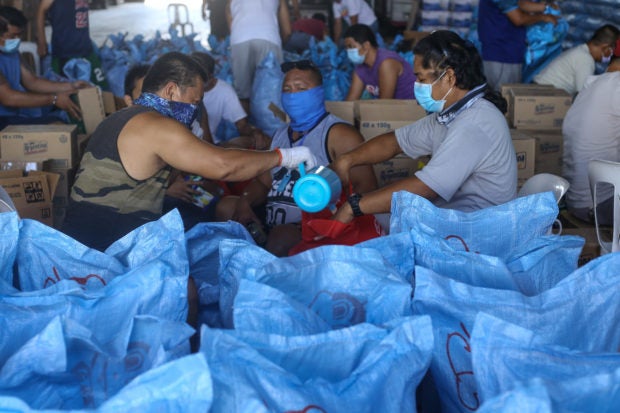 The Department of Social Welfare and Development (DSWD) on Saturday said it had so far released some P35 million worth of assistance to over 30 local government units (LGUs) since the start of the enhanced community quarantine in Luzon and in other areas in the country.

“One family food pack contains 6 kilograms of rice, assorted canned goods, coffee and energy drinks, and is good for a family of five for two days,” Dumlao said.

For families in need

When asked if the DSWD has ample stockpiles to continue delivering food packs to affected families, Dumlao explained that not all regional offices have enough space to accommodate food packs, but that they are in close coordination with LGUs, which can “put in a repeat order” to sustain the needs of their constituents.

Dumlao also said the DSWD, along with the Departments of Labor and Employment, Agriculture, Trade and Industry, Budget Management, Health, and the Interior and Local Government, have hammered out the guidelines for the government’s social amelioration package under Republic Act No. 11469, or the Bayanihan to Heal as One Act.

“Social amelioration cards will be distributed to identified families in need, in coordination with LGUs,” she said.

Dumlao also clarified that enrolled beneficiaries to the government’s flagship antipoverty program, the Pantawid Pamilyang Pilipino Program (4Ps), were still entitled to receive food packs and nonfood aid, as well as avail of the social amelioration program, on top of their existing benefits from the 4Ps.

Based on RA 11469, which granted President Duterte additional special powers, some 18 million low-income families will get P5,000 to P8,000 in emergency cash aid, depending on the minimum wage in their area.

Dumlao said 4Ps beneficiaries would receive a “top up” from the social amelioration package to ensure that they receive the maximum subsidy allotted to their region.

“We looked at minimum wage levels and made a close approximation of the amount needed to buy food, medicine and other supplies. We will then use existing lists of beneficiaries [from our social services programs], and we will also coordinate with LGUs since they will identify other target beneficiaries,” Dumlao said.

Earlier, the DSWD announced the temporary suspension of the conditionalities that 4Ps beneficiaries need to fulfill to receive cash grants and rice allowance.

Requirements range from class attendance of their children to attendance in health programs and seminars arranged by the DSWD. In 2019, the DSWD said the maximum cash grant a 4Ps beneficiary-family could receive per month was P2,900.