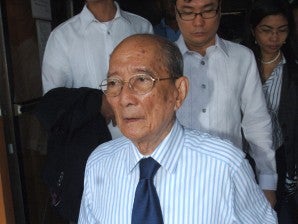 MANILA, Philippines – Lawyer Jose Flaminiano and his law office have withdrawn from the electoral sabotage case against former President Gloria Macapagal-Arroyo so that they could focus on others pending before the Sandiganbayan, one of her lawyers said Monday.

Laurence Arroyo said it was the former President herself who instructed them to focus on her other cases pending before the anti-graft court.

“Merong 3 kaso na na-file sa Sandiganbayan, so inutusan kami ng dating pangulo na hawakan yon [There were 3 cases filed before the Sandiganbayan and we were instructed by the former President (Gloria Macapagal-Arroyo)] to handle it,” said Arroyo, a representative of the law firm of Jose Flaminiano.

Arroyo is facing two counts of violations of Republic Act 3019 or the Anti-Graft and Corrupt Practices Act and Republic Act 6713 or the Code of Conduct and Ethical Standards for Public Officials and Employees before the Sandiganbayan in connection with the $329-million National Broadbank Network-ZTE contract.

“It’s about the legal team being able to focus on a particular case,” Arroyo told reporters.

Arroyo will be represented by Lawyer Benjamin Santos in the electoral sabotage case pending before the Pasay City regional trial court.