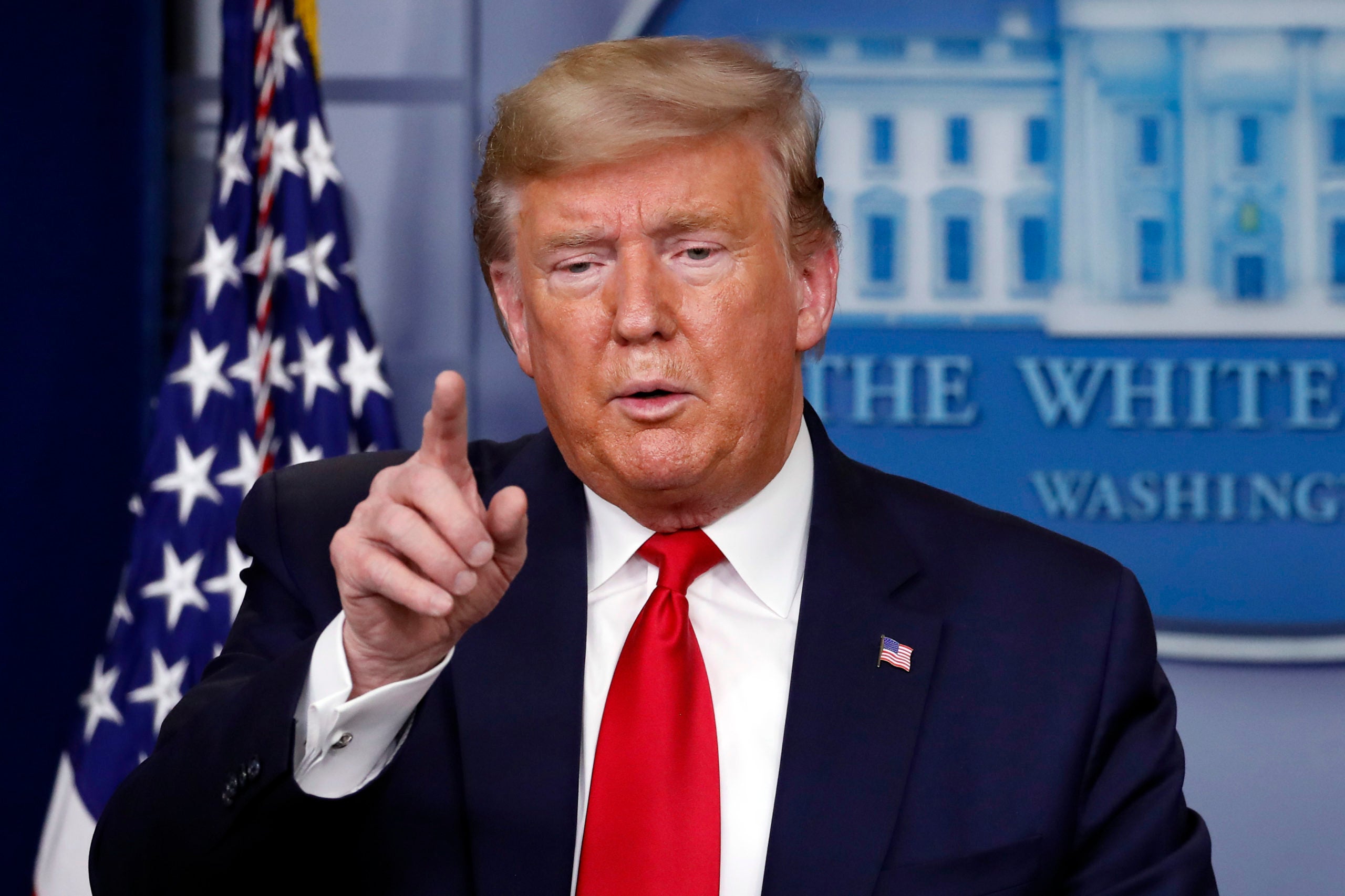 FiLE – In this March 26, 2020 file photo, President Donald Trump speaks about the coronavirus in the James Brady Briefing Room, in Washington. Trump attacked General Motors Friday, March 27, alleging that the company promised to build thousands more breathing machines than it can deliver for coronavirus patients. The attack on Twitter was another step in an escalating feud involving the president, GM, several governors and medical experts over the severity of the coronavirus crisis and just how many ventilators will be needed to handle it.(AP Photo/Alex Brandon, File)

Trump said negotiations with General Motors had been productive, “but our fight against the virus is too urgent to allow the give-and-take of the contracting process to continue to run its normal course.”

Trump said “GM was wasting time” and that his actions will help ensure the quick production of ventilators that will save American lives.

Previously Trump has been reluctant to use the act to force businesses to contribute to the coronavirus fight and wasn’t clear what triggered his order against GM.

The Detroit automaker is among the farthest along among U.S. companies trying to repurpose factories to build ventilators. It’s working with Ventec Life Systems, a small Seattle-area ventilator maker to increase the company’s production and will use a GM auto electronics plant in Kokomo, Indiana, to make the machines. The company said Friday it could build 10,000 ventilators per month starting in April with the potential to make even more.

After Trump invoked the act, GM said in a statement that it has been working around the clock for more than a week with Ventec and parts suppliers to build more ventilators. The company said its commitment to build Ventec’s ventilators “has never wavered.”

Trump said from the Oval Office that the government thought it had a deal for 40,000 ventilators but GM cut the number to 6,000 and talked about a higher price than previously discussed.

“I didn’t like it,” he said. “So we did activate it with respect to General Motors. And hopefully, maybe we won’t even need the full activation. We’ll find out, but we need the ventilators.”

GM said it is offering resources to Ventec “at cost.” And Ventec, not GM, is talking with the government. The only changes Ventec has made have been at the government’s request, said Chris Brooks, the company’s chief strategy officer. GM would merely be a contract manufacturer for Ventec, he said.

Ventec ventilators, which are portable and can handle intensive care patients, cost about $18,000 each, Brooks said. That’s much cheaper than the more sophisticated ventilators used by hospitals that can cost up to $50,000, he said.

The Federal Emergency Management Agency has made multiple requests since Sunday for estimates of how many ventilators it can build at what price and has not settled on any numbers, according to Brooks. That could slow Ventec’s efforts to ramp up production because it doesn’t know how many breathing machines it must build, he said.

Trump’s action came just after a series of tweets attacking GM and CEO Mary Barra. The president also cajoled Ford to build ventilators fast. Ford responded that it’s “pulling out all the stops.”

It was a dramatic shift in tone from the night before when the president told Fox News that pleas by hospitals for more ventilators are exaggerated.

Trump questioned whether the number of ventilators requested by hospitals was exaggerated: “I have a feeling that a lot of the numbers that are being said in some areas are just bigger than they’re going to be,” he said.

Experts say that no matter how many ventilators that companies can crank out, it may not be enough to cover the entire need, and it may not come in time to help areas now being hit hard with critical virus cases.

At present, U.S. hospitals have roughly 65,000 ventilators that are fully capable of treating severe coronavirus patients. They could cobble together about 170,000, including some simpler versions that won’t work in all cases, said Dr. Lewis Rubinson, chief medical officer at Morristown Medical Center in New Jersey and lead author of a 2010 medical journal article on the matter.

In February, Dr. James Lawler, an associate professor and infectious disease specialist at the University of Nebraska Medical Center, estimated that 960,000 people in the U.S. will need to be on ventilators.

Rubinson said it’s unlikely the U.S. would need that many ventilators at the same time, estimating it will need more like 300,000 fairly quickly. If social distancing works, people will get sick at different times, allowing hospitals to use ventilators on multiple patients.

In the most severe cases, the coronavirus damages healthy tissue in the lungs, making it hard for them to deliver oxygen to the blood. Pneumonia can develop, along with a more severe and potentially deadly condition called acute respiratory distress syndrome, which can damage other organs.

New York Gov. Andrew Cuomo has been pleading for 30,000 more ventilators to handle an expected surge in critical virus patients during the next three weeks.

U.S. Rep. Debbie Dingell, a Michigan Democrat, said her state is facing a critical need for ventilators. Michigan has gone from three coronavirus deaths a week ago to a total of 92 on Friday.

“I think we need to let the scientists and the doctors tell us what we need and not people without medical degrees or the background,” she said.