Canada urges US not to put troops at border during pandemic

TORONTO  — Canada has told the Trump administration that a proposal to put troops at the U.S.-Canada border amid the pandemic is entirely unnecessary and would damage relations between the two longtime allies. 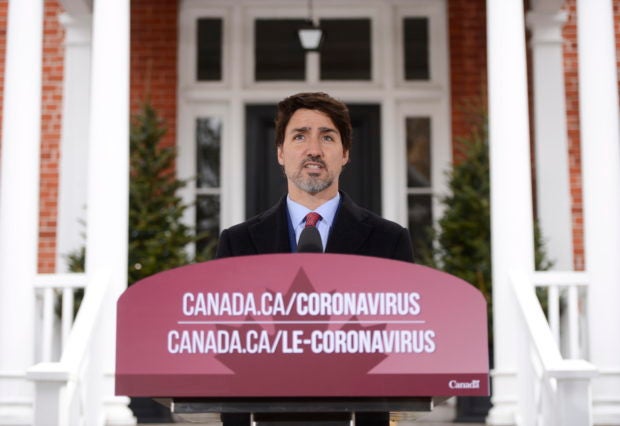 Prime Minister Justin Trudeau addresses Canadians on the COVID-19 pandemic from Rideau Cottage in Ottawa, Canada, Thursday, March 26, 2020. The new coronavirus causes mild or moderate symptoms for most people, but for some, especially older adults and people with existing health problems, it can cause more severe illness or death. (Sean Kilpatrick/The Canadian Press via AP)

Prime Minister Justin Trudeau said his government has been in discussions with the White House about convincing the U.S. not to do it.

“Canada and the United States have the longest un-militarized border in the world and it is very much in both of our interests for it to remain that way,” Trudeau said.

Trump said the U.S. has troops at the border but then said he would need to find out about that. He then suggested he would deploy troops along the Canadian border to match what is being done at the Mexican border.

“I guess it’s equal justice to a certain extent,” Trump said. “We have a lot of things coming in from Canada, we have trade, some illegal trade, that we don’t like.”

The U.S. military does not play any role in policing steel shipments. And the U.S. has not sent troops to the border to police the mutual closing of that border to non-essential, non-commercial traffic. The border is controlled on both sides by non-military entry stations.

According to a U.S. official, the Department of Homeland Security did make a formal request to the Pentagon for military forces to provide additional security along the northern border, between entry points. The official said the request was made a few days ago and the Defense Department has done some initial planning but there has been no final decision on whether or not to approve the request.

The official, who spoke on condition of anonymity to discuss internal deliberations, said there was no discussion about closing the border, only about beefing up efforts to prevent any illegal crossings. It wasn’t clear if by Thursday afternoon whether the department was still pursuing the request, or if approved, whether it would be filled by active duty or National Guard troops.

Another Trump administration official said they are considering additional actions to ensure “personnel at our borders have the resources and operational support needed to address the profound public health threat of uncontrolled cross-border movement during a pandemic.” The official spoke on condition of anonymity as they were not authorized to discuss internal discussions.

Canadian Deputy Prime Minister Chrystia Freeland said they have told the Trump administration there is no justification for troops. Very few people cross the border into the U.S. from Canada illegally and Canada has universal health care and widespread testing for the virus. And COVID-19 cases are surging more in the U.S. than in Canada.

“What we have said is, ‘We really do not believe at all that there would be a public health justification for you to take this action,'” Freeland said. “And we have said ‘We really don’t think is the right way to treat a trusted friend and military ally.'”

Freeland said the specifics of what the U.S. is proposing is a question for American officials to answer and declined to say what the Trump administration is contemplating.

She said they are “very directly and very forcefully” expressing the view that “this is an entirely unnecessary step” that Canada would “view as damaging to the relationship.”

Freeland stressed that they are talking about a potential decision by the U.S. and said they first learned of the proposal a few days ago. Trudeau’s office has been in direct contact with the White House and Canada’s defense and public safety ministers have spoken to their counterparts.

“Our understanding is that a decision has yet not been acted upon or fully taken. But having said that, decisions are taken speedily by all governments around the world including ours,” Freeland said. “Canada is strongly opposed to this U.S. proposal.”

Canada relies on the U.S. for 75 percent of its exports. About 18 percent of Canada’s exports go to the U.S. The two countries have already closed the border both ways to all non-essential travel.

“This is strictly showmanship on the part of the American president. It will have no practical impact. It is an attempt to impress the American public that the president is doing something,” said Nelson Wiseman, a political science professor at the University of Toronto.

He called Trump’s comments about steel and the border “typical Trump gibberish: a combination of bluster, falsities, and hyperbole.”

Bruce Heyman, a former U.S. ambassador to Canada, said it would be a serious misuse of resources and a dangerous and inappropriate use of American troops.