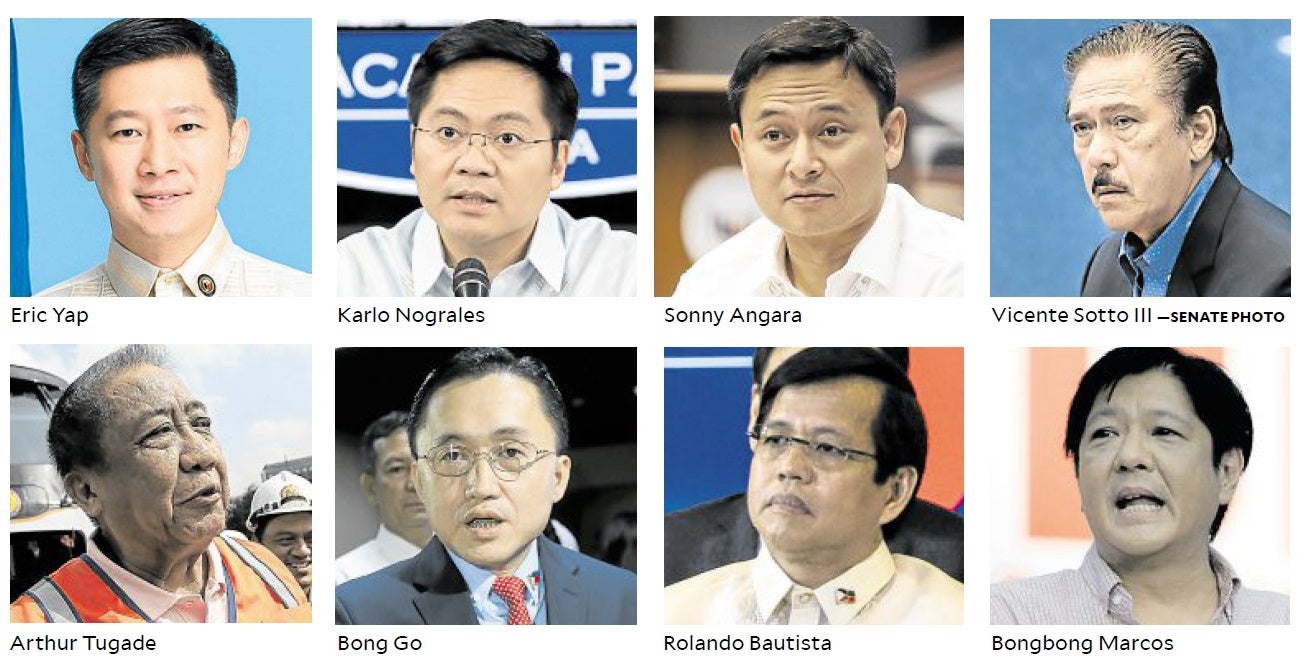 Several Cabinet officials and lawmakers have decided to go into self-quarantine after attending a meeting in Malacañang where they interacted with a party-list representative who was later tested positive for the new coronavirus.

Cabinet Secretary Karlo Nograles, Budget Secretary Wendel Avisado, Social Welfare Secretary Rolando Bautista, Presidential Peace Adviser Carlito Galvez Jr., Senate President Vicente Sotto III and Sen. Bong Go were exposed to ACT-CIS Rep. Eric Yap during a meeting on a bill on coronavirus response in the Palace on Saturday. They all said they would go into isolation after Yap announced on Wednesday night that his test for the coronavirus had come back positive.

The Presidential Security Group said on Thursday that Yap breached Malacañang protocol by mishandling his health declaration, endangering the presidential guard and Palace personnel, and that it was considering taking legal action against the congressman.

Yap said on Thursday he believed he had taken all precautions to avoid catching the virus but he still got it.

He said he had himself tested after learning that Transportation Secretary Arturo Tugade had had direct contact with a confirmed coronavirus case and had gone into self-quarantine.

Yap said he was relieved when the tests of Tugade and other Cabinet officials who had met the patient returned negative.

How he got the virus is a mystery, he said.

“This teaches us a lesson that we can’t take this virus very lightly. It is indeed very lethal,” Yap said.

In a Viber message, House Secretary General Jose Luis Montales said all House members and their staff who attended the special session on Monday were required to go into self-quarantine.

Nograles spoke about the exposure of the officials and lawmakers in a radio interview on Thursday.

“We, their colleagues in the Cabinet, are considered second level. The protocol does not require us to undergo quarantine, but a few of us, myself included, decided to undergo voluntary self-quarantine,” Nograles said.

Sotto said he was at home and that he was willing to be tested for the coronavirus.

He said he did not think he was infected by Yap as the meeting attended by the senators was “very short.”

“The real meeting transpired in the office of (Executive Secretary Salvador) Medialdea and he was not included,” Sotto said.

He said he had learned from Sen. Pia Cayetano that Yap wore a mask for most of the meeting, except when the group posed for pictures.

Sotto said he was fine, but if people think he had to take a test again, then he would.

Go, who was also in the Malacañang meeting with Sotto, said he would go into self-quarantine.

Go said he had no symptoms of the coronavirus, “[b]ut since protocol requires that those who were directly exposed to persons positive for COVID-19 need to undergo self-quarantine, I am left with no choice but to comply.”

The first senator to test positive for the coronavirus is Majority Leader Juan Miguel Zubiri, who is now in self-isolation at home.

Sen. Koko Pimentel became the second when he learned on Tuesday that his coronavirus test had returned positive as he was at Makati Medical Center with his wife, who was scheduled to give birth to their first child by cesarean section.

He drew a firestorm of criticism for his presence at the hospital while supposed to be in quarantine after being tested for the virus. Pimentel is facing legal action from a group of lawyers for allegedly violating quarantine rules.

Third to test positive for the coronavirus is Sen. Sonny Angara, who said on Thursday that he has symptoms of COVID-19, such as fever, cough, headache and general weakness.

“I have not been in contact with the public since taking the test [on] March 16,” said Angara, chair of the Senate finance committee, who skipped Saturday’s meeting in Malacañang.

A member of Senator Cayetano’s staff was also found positive for the virus. Senate Secretary Myra Villarica said in a statement on Thursday that the staff member had not traveled abroad recently and that the infection had been traced to a family member.

The staff member reported for work on March 11, the last day of the session, but did not go into the plenary hall. Villarica said the staff member also did not show symptoms at the time. The symptoms appeared only after March 11, she said.

The staff members also did not report for work during the Senate special session on Monday.Villarica said the Senate medical team had been instructed to begin contact tracing, impose quarantine measures, and give assistance in the testing of employees as needed.

A former member of the Senate, Bongbong Marcos, on Thursday denied talk on social media that he was in critical condition because of the coronavirus.

Marcos said in a statement that he had been tested for the virus and was awaiting the results. He said he was on self-quarantine and was doing well.

His statement was accompanied by a photo of himself sitting in bed and holding a copy of the Thursday edition of a newspaper.

His sister, Sen. Imee Marcos, said in a television interview that her brother felt ill after arriving from a trip to Spain. She said he had himself tested for the virus several days later. They have not met since his arrival, she said.

Before the release of Bongbong’s statement, another statement using the same photo and format and attributed to his wife, Liza, had circulated on social media. The statement attributed to Liza said her whole family had been tested for the coronavirus and that the results had returned negative.

Her husband’s staff said that statement should be disregarded and that the official statement was the one from the former senator. —WITH A REPORT FROM MELVIN GASCON