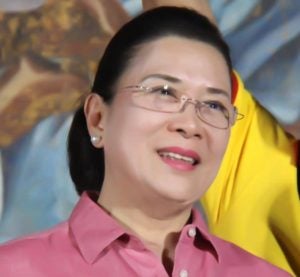 The governor of Rizal, a neighboring province of Metro Manila, has tested positive for the new coronavirus disease (COVID-19), making her so far the highest-ranking local chief executive to have been infected by the virus.

Gov. Rebecca “Nini” Ynares, 70, has been on quarantine for almost a week now, along with her husband and former Rizal Gov. Casimiro “Ito” Ynares Jr., 72.

Jun said the governor was tested for the virus after realizing that she was exposed to an infected person.

He said he and his wife, Antipolo City Mayor Andrea Ynares, were “OK” and that health officials had started contact tracing.

In a public post, the provincial government advised those who might have been in contact with the governor or her husband “over the last two weeks” to seek medical attention should they feel or show any symptom of the disease.

If there were no symptoms, people were asked to undergo a 14-day home quarantine per Department of Health guidelines.

As of March 24, Rizal had 28 cases and four deaths related to COVID-19, the highest number of infection and mortality in Calabarzon (Cavite, Laguna, Batangas, Rizal and Quezon) region.

Disclosing the governor’s health condition, which her family described as “stable,” has caused public anxiety but is seen by many as part of a public official’s duty to inform the constituents.

“I just wonder how many people she shook hands [and interacted] with [before the test results came out],” one resident said.

In Cavite province, Naic Mayor Junio Dualan also disclosed that he was infected by the virus.

Dualan, who was tested on March 18, said he remained in “good condition” but on strict self-quarantine.

In Laguna province, obstetrician Raquel Seva from San Pedro City died on Wednesday to COVID-19 and was included on the list of “fallen doctors” disclosed by the Philippine Medical Association.

Seva’s husband, also a doctor, was confined in a hospital but still awaiting test results, the city health office said.

A Laguna judge had died while being considered a person under investigation for the virus. His family refused to disclose the results of the test, but one of his prosecutors had tested positive for the virus, a source said.

In La Union province, Caba Mayor Philip Crispino and his wife, Councilor Donna Crispino, tested positive for COVID-19 but were in stable condition while under strict quarantine.

In Bulacan province, Baliwag Mayor Ferdinand Estrella said he had recovered from the virus, citing the results of his second test from the Research Institute for Tropical Medicine.

In Cagayan Valley, former Cagayan Rep. Ramon Nolasco Sr. confirmed that he was the COVID-19 patient in Gattaran town and urged villagers who came in contact with him to seek medical consultation and undergo self-quarantine.

Nolasco said he remained on self-quarantine after suffering from fever and cough on March 12.

In Negros Oriental province, the sister-in-law of a town councilor who died of COVID-19 had died while waiting for the results of her test.

The woman, along with her husband, was confined at a private hospital in Dumaguete City after both experienced flu-like symptoms.

Her husband is the brother of the councilor of Tayasan town who died of COVID-19 on March 15—the first case of the province. —WITH REPORTS FROM VILLAMOR VISAYA JR., CARMELA REYES-ESTROPE, YOLANDA SOTELO, CARLA GOMEZ, NESTLE SEMILLA AND NESTOR BURGOS JR.