Short on doctors, Balkans brace for worst of coronavirus 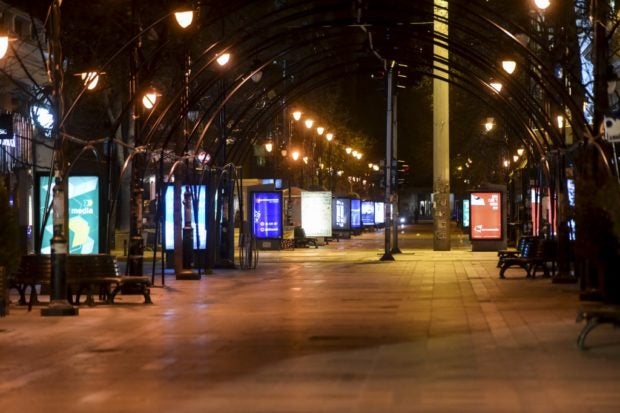 A picture taken late on March 22, 2020 shows the deserted main square of Skopje, as North Macedonia has introduced curfew from 9pm to 5am for the entire population except those authorised and night shift workers, in a bid to fight the COVID-19 disease caused by the novel coronavirus. Photo by Robert ATANASOVSKI / AFP

SKOPJE — With hospitals lacking equipment and low on doctors who have been steadily moving abroad, Balkan countries fear the worst as they watch the new coronavirus ravage their far richer European neighbors.

“If much bigger and wealthier countries couldn’t contain the sharp increase of infections, what can be expected from ours?” Zoran Hristovski, a Skopje resident in his late 40s, said.

It is a widely held concern across the Balkans, where many are nervously waiting for the coronavirus to peak in one of Europe’s poorest corners.

Since the first case of COVID-19 was detected in the region one month ago, some 25 people have died and known infections have increased to more than 2,000  — a likely underestimation given limited testing.

Should the Balkans follow the steep curve playing out in places like Italy and Spain, doctors warn that underfunded healthcare systems will be pushed to the brink.

The region is already afflicted by a brain drain crisis, with tens of thousands of people — including doctors and nurses — moving abroad every year, lured by better wages and less corruption in the West.

In North Macedonia, up to half of medical school students annually pack their bags after graduation and head for countries like Germany, said Nikola Brzanov, a 38-year-old emergency room doctor, who leads an organization of young medical professionals.

“And usually it is the best quality doctors who go abroad,” he added.

Balkan states have some of the lowest density rates of doctors in Europe, according to available data from the World Health Organization (WHO).

Albania is the worst off, with only 1.2 physicians per 1,000 inhabitants, followed by Bosnia and Romania with 2 and 2.2 respectively, the WHO says.

The number of nurses in Bulgaria, where they have recently protested being overworked and underpaid, has been slashed in half over the past 30 years.

There are also severe staff shortages in impoverished Kosovo, where many residents normally travel to neighboring countries for better treatment — an option no longer available with borders shut.

“The situation is alarming, we must not hide it,” said Blerim Syla, the president of Kosovo’s health unions, who estimates the sector lacks some 5,000 medical professionals.

In a bid to bolster hospital staff, Albanian Prime Minister Edi Rama has promised a 1,000-euro ($1,100) bonus to retired health workers and medical students who volunteer — a call more than 2,000 have heeded.

Serbia, which was slower to implement anti-virus measures, has also announced a 10-percent salary bump for health workers starting next month.

Aware of the limits of their healthcare systems and budgets, many governments in the region moved quickly to shut down public life in hopes of staving off a deluge of cases.

Since then, authorities across the region of some 48 million people have followed with increasingly stringent measures, putting the Balkans under a virtual lockdown.

In some countries, health ministers have become unlikely heroes for their informative, calmly-delivered updates.

North Macedonia’s health minister Venko Filipce has inspired internet memes that dress him in a Superman outfit, while his Zagreb counterpart has been dubbed “Croatia’s corona hero”.

Time will tell whether the lockdown measures go far enough.

In the meantime, doctors are still worried that a lack of equipment in hospitals makes them woefully unprepared for such a crisis.

In North Macedonia and Kosovo, for example, there are around 130 respirators for populations of around two million.

In order to ensure enough beds, Skopje hospitals are now turning away all patients except those who need “life-saving procedures”, said Brzanov, of the Young Doctor’s club.

There is also a lack of basic protective gear like masks and goggles for doctors and nurses on the frontlines.

“We’ve only seen protective masks on TV,” said a Romanian doctor in Bucharest.

In Romania’s northeast, a hospital was forced to close temporarily after some 50 doctors and nurses were infected.

Brussels’ recent decision to restrict exports of protective gear alarmed many of the non-EU countries in the region, in particular Serbia, whose president has instead lavished praise on China’s swift aid.

Florian Bieber, a Balkans expert at the University of Graz, said Germany and other countries which “actively recruit medical professionals” from the region ought to shoulder some blame for leaving the Balkans high and dry in a health emergency.

But local governments have also “been under-investing in health care” and driving the emigration exodus with corruption, he added.

“This becomes visible in times of crisis.”