Nearly 2,000 foreigners seek to stay in Bali as home countries close borders due to COVID-19 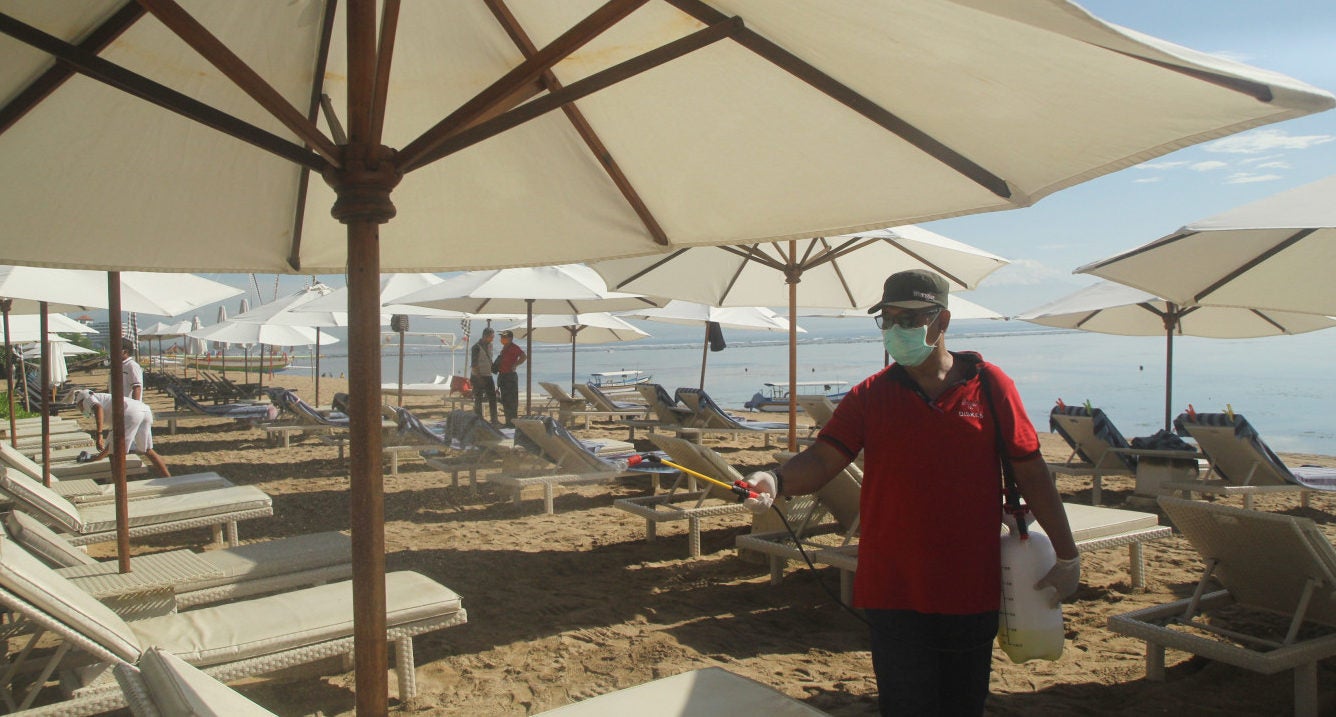 Sterilization: A worker sprays disinfectant at Sanur Beach, Denpasar, Bali, on March 15. The Bali administration carried out simultaneous sanitation efforts in cities and regencies across the province by spraying disinfectant at ports, terminals, hotels, markets, tourist objects and public spaces as part of its efforts to contain the spread of COVID-19. (JP/Zul Trio Anggono)

JAKARTA — Hundreds of foreign nationals have packed immigration offices in Bali in recent weeks, requesting to extend their visas as their home countries lock down due to the COVID-19 pandemic.

According to the Bali branch of the Law and Human Rights Ministry, at least 1,830 foreigners have applied for a so-called emergency stay permit at immigration offices on the resort island since February.

“They were registered at the immigration offices of Badung, Denpasar and Singaraja,” the office’s spokesperson, I Putu Surya Dharma, said on Monday as quoted by kompas.com.

He said up to 80 percent of the foreigners were Chinese nationals. The rest came from Britain, Italy, the United States, and Germany, among other countries.

As Jakarta enters a state of emergency after recording more than 350 COVID-19 cases, Bali, a hot spot for international tourists, has reported only six cases, all of which authorities said originated outside the island.

The first case was that of a British tourist referred to as Case 25, who died at Sanglah Hospital and was only known to have COVID-19 after her death. The second case was a foreign tourist from France, while the third and fourth cases were Balinese who had just returned from Italy and Jakarta, respectively.

Before the government announced the country’s first cases in early March, Bali was the first region in Indonesia to have been linked to a number of cases affecting foreigners.

A week before Jokowi’s announcement, New Zealand confirmed its first coronavirus case of a female citizen in her 60s who had traveled from Tehran to Auckland via Bali. A Chinese national identified as Jin reportedly visited Bali in late January and tested positive for COVID-19 days after returning to his home country.

As of Monday afternoon, Indonesia has announced 579 COVID-19 cases nationwide, with 49 deaths.

Read Next
Graft laws will be applied in excess of Duterte special powers, says Drilon
EDITORS' PICK
DepEd starts monthlong ‘remote enrollment’ on June 1 amid COVID-19 pandemic
Leveling up your ‘lutong bahay’ with the kitchen companion you never knew you needed
No domestic flights allowed yet this week
Quarantine passes no longer required under GCQ, but curfew remains
Someone from the Philippines can become $356 Million richer this Tuesday
Cherry Mobile teams up with Cloud Panda PH, launches online store
MOST READ
5 car dealership outlets shutting down
Calida attends House hearing on ABS-CBN franchise
Modified number coding scheme on by June 8 – MMDA
WATCH: Edsa traffic blues on GCQ Day 1
Don't miss out on the latest news and information.