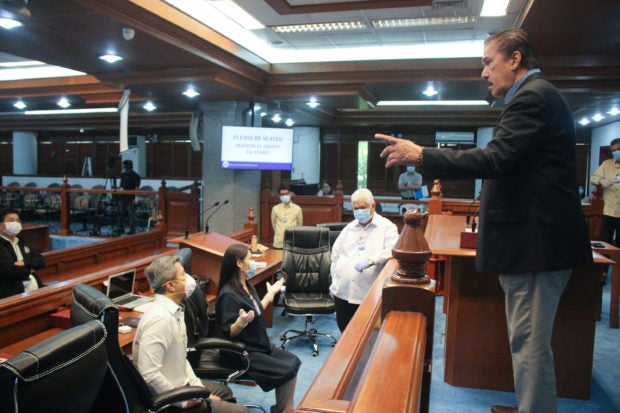 MANILA, Philippines — “They should not have adopted it.”

Senate President Vicente Sotto III said this as he and other senators defended the amendments made on a bill granting President Rodrigo Duterte special powers to deal with the coronavirus disease (COVID-19) pandemic after it received criticism from the House of Representatives.

“If we wanted publicity, we would have killed this bill and every single advocacy we would spell out until it’s as thick as a phone book,” Cayetano said, speaking partly in Filipino.

“If the Senate bill is that way then that’s up to them. But we’re simple,” he added.

But Senate President Vicente Sotto III stressed that top Cabinet officials participated in the deliberation of the bill “the whole time, from filing all the way ’til [third] reading.”

“I do not understand how they can say that,” Sotto told reporters in a message on Tuesday when sought for a comment

He said Executive Secretary Salvador Medialdea, the secretaries of the finance, budget management, social welfare and development, justice departments and a health undersecretary were “all there with us for 18 hours and participated in some discussions and heard all the amendments.”

“They never said we did anything  of the sort and in fact lauded our version. They should not have adopted it.” he added.

“They approved it for the president to sign. End of story,” Recto said.

Senator Panfilo Lacson, likewise, said he does “not know where the criticism is coming from.”

“But they adopted the Senate version, right? The Cabinet members who joined us in our caucus, all the way to approval of the bill on final reading went home tired and sleepy but satisfied and very grateful,” he told reporters in a message.

“When I interpellate, I study and do my research, so when I propose my amendments, I can defend it because I have enough legal basis,” he further said.

Senate Bill No. 1418, if enacted to law, would grant the President additional powers to adopt “temporary emergency measures” to respond to the COVID-19 pandemic.

The bill also authorizes the President to direct the “discontinuance” of appropriated programs, projects or activities of any agency of the executive department, including government-owned or controlled corporations (GOCCs), in the 2019 and 2020 General Appropriations Act (GAA), “whether released or unreleased, the allotments for which remain unobligated, and utilize the savings generated therefrom.”

These funds would then be used “to augment the allocation for any item directly related to support operations and response measures, which are necessary or beneficial in order to address the COVID-19 emergency.”