Mindanao records 13 deaths of persons under investigation for COVID-19; kits on standby in Rizal town
By: the Inquirer Bureaus - @inquirerdotnet
Philippine Daily Inquirer / 04:17 AM March 24, 2020 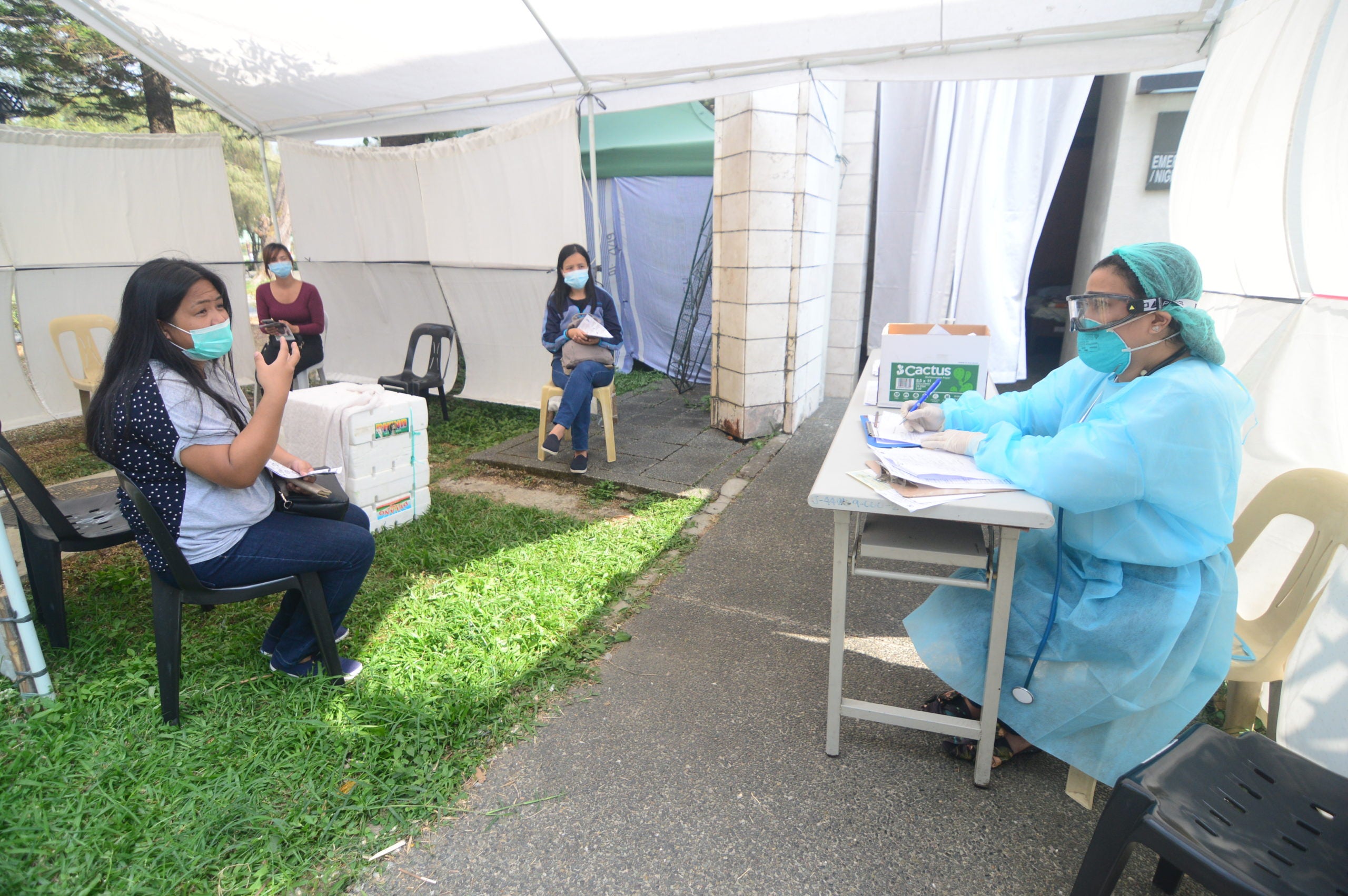 PROPER DISTANCE Adequate spacing between doctors and patients is observed at an outdoor triage station at Benguet General Hospital in La Trinidad, Benguet, where patients with history of travel to areas with confirmed COVID-19 cases are initially checked. —Karlston Lapniten

People suspected of having the new coronavirus disease (COVID-19) in the provinces are dying even without their knowing if they had tested positive for the virus or not because of delays in the release of their test results.

In Rizal province, the rising number of persons under investigation (PUIs) for COVID-19 has prompted the municipal government of Cainta to purchase testing kits out of its “mayor’s own pocket,” a local health official said.

But without certification from the Food and Drug Administration (FDA), the test kits, called “Rapid Strep Test” for “COVID-19 IgM,” are practically useless.

Eduardo Janairo, Department of Health (DOH) director in Calabarzon (Cavite, Laguna, Batangas, Rizal and Quezon), said the kits had “not yet been approved by our FDA” for use, despite public clamor for mass testing.

Cainta Municipal Hospital, for one, is eager to use the kits once the FDA gives its go signal, according to Dr. Antonio Jayson Sierra, hospital chief.

Sierra said the diagnostic tools were part of the local government’s “preparedness in the event of an extreme emergency.”

Cainta had so far recorded eight cases of infection. Two of its PUIs had died with their test results yet to come out.

A PUI in Los Baños, Laguna province, and two others in Carmona, Cavite province, died before knowing their test results.

Across Mindanao, at least 13 PUIs had died in the past days, their kin awaiting lab results from the Research Institute for Tropical Medicine (RITM) based in Metro Manila.

Without commercial flights, swab samples taken from patients have to be flown by military cargo planes based on schedules agreed upon with the DOH, according to health officials.

Of the 13 PUI deaths, three were later found to have negative test results. One was confirmed to have COVID-19, later tagged as Patient 201 (PH 201).

The dead were disposed off in the manner prescribed by health authorities.

Cremation is the primary mode of disposing of the body of a person who died of an infectious disease, said Dr. Jose Chan, medical director of the Northern Mindanao Medical Center in Cagayan de Oro City.

But burial may be allowed for cultural reasons, subject to several strictures like doing so within 12 hours and avoiding crowds during wake and interment.

For Muslims, the traditional washing of the corpse is forbidden.

The Inter-Agency Task Force for the Management of Emerging Infectious Diseases, in an amended resolution on Sunday, said local governments must first coordinate with the DOH before acquiring and using any test kit.

‘Gold standard’The Philippines currently uses the polymerase chain reaction (PCR) done by throat swabbing and the specimen being sent to the laboratory at RITM in Muntinlupa City.

“That [PCR-based test] is the gold standard [with its] reliability already established,” Sierra said.

Normally, the turnaround time for PCR-based test takes one to three days, but the overwhelming number of patients extends waiting time to five days or even longer.

On the other hand, the COVID-19 IgM test is done by taking blood samples with a turnaround time of only 20 minutes, Sierra said. These kits are also a lot cheaper, costing P550 to P700 apiece.

Once approved for use, Mayor Johnielle Keith Nieto said he would give priority for screening people whose blood count and chest X-rays were “suggestive” of COVID-19. —REPORTS FROM MARICAR CINCO, JULIE ALIPALA, DIVINA SUSON, RICHEL UMEL AND EDWIN FERNANDEZ INQ