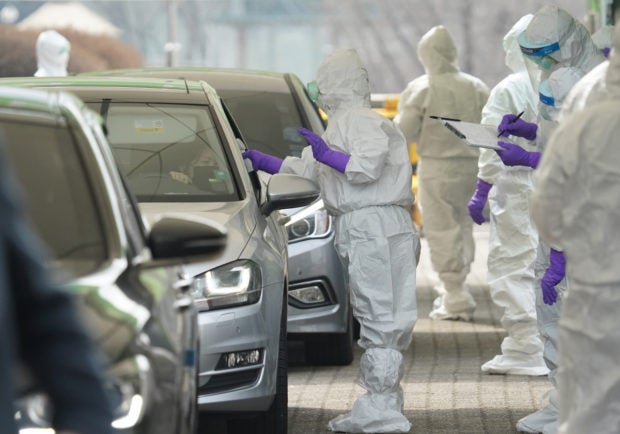 Medical staff check the temperature of a patient at a drive-thru testing center for COVID-19 set up at Jamsil Sports Complex in Songpa-gu, Seoul, March 3. (Yonhap) via The Korea Herald

SEOUL — The outbreak and containment of the novel coronavirus in South Korea have drawn international attention to the country’s ready use of real-time polymerase chain reaction test kits.

Korea has allowed for the emergency use of new RT-PCR kits, with which the nation is conducting around 10,000 tests daily at some 90 collaborating research labs, according to the Korean Society of Laboratory Medicine.

In the month or so between Feb. 7 and March 10, over 350,000 tests were analyzed at private institutions. The volume of tests had been proportionate to the drastic increase in numbers of confirmed patients. But by combing through as many people as possible early on in the outbreak, Korea was able to quarantine and treat the infected. In three weeks, the number of people testing positive for the virus began to decrease.

From end-February, when the daily uptick of confirmed patients was over 700, the figures decreased to below or around 100 by mid-March.

With the domestic spread somewhat considered contained from its worst point, the country is now making efforts to bolster checks on incoming potential virus carriers through tougher border controls. From Sunday, every new arrival entering Korea from Europe is now being tested for the novel coronavirus.

The first step in fighting the pandemic is to quickly decipher who among the population has to be quarantined. The accuracy and speed of the test kits have become poignantly important.

So far, RT-PCR, or gene amplification technology, has proven to yield the most accurate results for COVID-19 status, and in just six hours. Earlier tests required a wait of 24 hours.

This was only 10 days after the first reported case of a coronavirus patient in the country.

Kwon Kye-chul, chairperson of the Korean Society for Laboratory Medicine, said Korea’s experience with Middle East respiratory syndrome in 2015 was quintessential in preparing the nation for the outbreak of COVID-19.

“Since MERS, the laboratory medicine association had closely worked together with the state disease control body in establishing an active communication route,” Kwon said.

During the time of MERS, the capacity to manufacture advanced test kits had already existed, but the system had been slow to approve the use of each additional new device.

The disease control center, responsible for testing the efficacy of each kit, had a tangled internal structure that made speedy amendments difficult.

Many of the measures had been ad hoc then.

Some 40,000 MERS tests were conducted — the sheer volume of which the KCDC and state research labs were not able to process, requiring them to belatedly request help from independent medical institutes.

Learning from the time-consuming process of trial and error, the KCDC later established a center specializing in infectious disease analysis. It streamlined the communication protocol, and it created a legal framework for fast-tracking approval of emergency test kits.

This new system had been activated during the 2016 Zika virus scare, demonstrating an enhanced workflow.

For this time around, upon the outbreak of COVID-19, the Drug Ministry has received a total of 64 applications for expedited use of RT-PCR test kits from 42 companies, as of March 9. The gate has now been closed.

The first companies to have their products approved were Seegene, Kogene, Solgent and SD Biosensor, according to the Drug Ministry. The rest are undergoing review.

The presidential office of Cheong Wa Dae has helped export some 50,000 RT-PCR kits from Seegene to the United Arab Emirates. The UAE is the first among 17 countries that have requested aid in the form of test kits. Solgent has exported RT-PCR kits that can accommodate 30,000 people in Europe through a local partner.

All of the aforementioned RT-PCR test kit manufacturers, as well as PCL, LabGenomics and Kaenselob, were approved for the exports. These companies still need to get individual export destinations’ clearance. Seegene and Solgent were both approved for sales in the Philippines, and are widening their scope of reach.

Many other companies have gone ahead to acquire CE-IVD, the certification needed for all in vitro diagnostics devices to be sold in Europe.

Some of these companies have pursued methods other than RT-PCR. Sugentech’s igG/igM antibody testing kit and Philosys Healthcare’s immunoassay testing kit can be used in areas where they lack RT-PCR analyzation capacity.

There are innumerable Korean companies jumping in to get their test kits approved for overseas export, but the full list cannot be disclosed to the public due to the sensitive nature of the stock market, said Korea’s association of biologics companies, Korea Bio.

According to Korea Bio, RT-PCR, antibody testing and immunoassays are not rivals, but complement each other.

To make test kits, researchers need samples from COVID-19 patients to see mutations of the virus. The more samples a company has, the better, said Yang Kap-seok, CEO of genomics company Macrogen.

Macrogen had been the first to carry out whole genome sequencing of the Korean COVID-19 virus together with Seoul National University Hospital. The company had identified nine mutations in the sample collected from a Korean patient as compared to the virus found in Chinese patients.

Celltrion, a leading biologics company here, is an example of a company pooling samples from Chonnam National University and Chosun University with aims to produce COVID-19 treatment to the clinical trial stage by June, and commercial test kits by May at the earliest, or by August conservatively.

But there are other cases that involve breakthroughs in digital health care via the use of artificial intelligence in pharmaceutical research.

In Seegene’s case, the company began developing its RT-PCR test kit ahead of time, even before Korea had its first case of COVID-19.

Making use of the whole genome sequencing information of the novel coronavirus shared to all global scientists, Seegene used an artificial intelligence system to deliver a test kit in the fastest manner.

Since end-January, Korea has exercised heightened communications between government, industry, academia and research in bringing forth results in a fast-track manner. This does not mean the disease control center and Drug Ministry indiscriminately grant approval to just any eager company. The bulwarks against this mutating virus say they are vigorously testing the Korean COVID-19 test kits, and that they are giving their best-judged decisions.

The US government has reportedly asked its embassy in Korea to help transplant its drive-thru testing centers, which have drawn much praise in international media. Indonesian authorities are also attempting to initiate intergovernmental support to begin drive-thru testing in the country.

Also notable are the apps made by the Ministry of Welfare and Ministry of Interior and Safety.

The app from the Ministry of Welfare helps those who enter Korea from overseas to self-test their health condition. The service is provided in Korean, English, Chinese and French. One must input one’s passport number, and the system will already know if the person has newly arrived in country. Should the person display symptoms of fever, including a temperature above 37.5 degrees, or a cough, sore throat or troubled breathing, authorities contact the person and take the necessary steps.

The app from the Ministry of Interior is for those who have officially been put in self-quarantine and their corresponding civil servant caretaker. Only confirmed patients under quarantine can access the app, which facilitates remote management of their situation by the government.