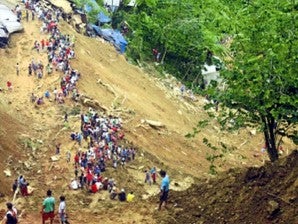 This photo released by the Philippine Army shows the extent of Thursday’s landslide that hit the small-scale mining community of Pantukan in Compostela Valley. The landslide buried dozens of people months after government officials warned miners that the mountain above them was guaranteed to crumble. PHOTO COURTESY OF 10TH INFANTRY DIVISION, PHILIPPINE ARMY

PANTUKAN, Compostela Valley—Hours before the landslide struck at 3 a.m. in Barangay (village) Napnapan here on Jan. 5, village guards and mine sentries had been sounding the alarm, including firing guns into the air, because soil and small rocks had started falling, miners and authorities said.

Some villagers in Diat Uno and Diat Dos sub-villages heeded the alert and moved a few hundred meters away, thinking they would be safe there.

But many of the shanty dwellers far below might not have heard the warning shots as they were in deep slumber or that the firing could have been muted by noise from the ball mills.

Or the people might just have ignored the warning because they were used to minor landslides, said Supt. Ireneo Dalugdog, commander of the public safety company of the provincial police office.

The death toll from the landslide went up to 31 as more bodies were recovered over the weekend.

Maj. Jacob Obligado, civil military operations head of the 10th Infantry Division, said the number of missing persons went up to 45 because more families had reported their loss at the command post set up by the Philippine Army at the municipal hall.

On Friday, police dismissed reports that more than 100 people could have been buried when the upper portion of Diat Uno collapsed on the mining communities of Diat Dos, but testimonies from people in the area revealed there could have been more.

A miner working there told the Philippine Daily Inquirer that more than 100 people could still be missing, noting that the landslide buried 62 houses. His estimate jibed with that of the midwife who had talked to survivors at the disaster site.

Apolinario Malinaw, 48, said that in most cases, slight soil movement and falling rocks would indicate that the topsoil was about to cave in.

“The village watchmen would fire their guns whenever there were impending landslides to rouse the people from sleep,” said Ryan Mijares, 33, another miner.

Mijares said those who had heard the shots might have chosen to ignore them, assuming that it was yet another minor landslide.

For those living in Diat Uno and other nearby communities, landslides, albeit minor ones, have become a normal occurrence.

Lina Daniel, a miner’s wife, recounted how she tried to warn those in neighboring shanties to vacate a few hours before the slide took place.

“At around 11 on the evening of Jan. 4, we already noticed that the topsoil at the ridge above our house was moving. I told my husband that it was becoming too risky to stay. So, we decided to evacuate,” she said.

After securing her 7-year-old daughter, Lina, 44, said she and her husband knocked on as many doors of their neighbors’ houses as possible and urged them to move away.

“My husband shouted to one of our neighbors, an old man, who is living alone in his shack. But he won’t budge so we tried throwing stones at his house. Luckily, a stone went through his wall, which is made of light materials, and woke him up,” she said.

Daniel said she saw that some of those living uphill had beamed flashlights on people below to warn them of an impending landslide.

“Before the landslide, I heard the roots of the ‘balete’ tree near our house snapping and creaking. I know it was a sign that we should evacuate. It is important that when we noticed the warning we should heed it,” she said.

Daniel said it was fortunate that her family lived on the uppermost portion of the settlement in Diat Uno, where the cracks and landslide originated.

“It was advantageous for us who are living at the upper level of the settlement because we can easily see nature’s warning and the gradual wearing away of the soil. However, those who are on lower ground did not notice it and they were only awakened by the loud booming sound of the landslide,” she said.

Carlito Cabañero, a community leader of Diat Dos, said he and the others had exerted efforts in warning the residents to vacate the area, but many simply ignored them.

Mijares, a miner for years, said he had seen several landslides in the area, including the deadly ones. “In 1986, there was a great landslide here and it was believed then that thousands were killed as the gold rush was at its peak,” he said.

For most people there, the prospects of striking it big or having money to support their families outweighed the dangers of mining, he said.

“All of us here fear something might happen to us, but we are just trying to survive by making a living here,” Mijares said.

Benito Ramos, head of the National Disaster Risk Reduction and Management Council, said the lure of gold was a magnet to these small-scale miners.

On Sunday, officials ordered similar sites across the mountainous area to shut down.

The Philippines has some of the world’s biggest gold, copper and nickel deposits, but most of these have remained off-limits to big mining firms partly due to local opposition over major exploration projects. The mountainous region still draws gold prospectors from surrounding areas despite frequent, deadly landslides.

Their largely unregulated tunneling has made the mountainside unstable, government experts say, and heavy rains since last month had saturated the earth on top, triggering the deadly landslide.

Obligado said the number of dead or missing could still change in the coming days because there might have been people who did not register with village officials when they arrived in the area a few days ago.

“Even the barangay leaders do not automatically know who comes in,” Mayor Celso Sarenas said.

Local Government Secretary Jesse Robredo ordered a thorough investigation of the culpability of local officials for failing to enforce the ban on human habitation in the area, which is highly susceptible to landslides.

Robredo said that once found guilty of “omission or commission,” local officials from the barangay captain up to the governor, could face suspension from service.

Four people, who were earlier reported as missing, are alive and have returned to their families, according to the latest report from the military’s Eastern Mindanao Command.

The report said Santos Saraum Sr. and his son, Santos Jr., a certain Jun-jun and Kambal had been reunited with their families. With a report from AFP