MANILA, Philippines — Standing on a seemingly endless road in the town of Gumaca in Quezon province, Marlon Dalipe was beginning to feel the pain down to his feet—after all, it’s already the third day of what became a five-day walk from the nation’s capital region to his hometown.

Dalipe only had his persistence to return home and P500 cash in his wallet when he decided to do what many would say is unimaginable—walk his way from Alabang in Muntinlupa City to his hometown in Camarines Sur.

He was among the individuals who took part in what seemed like a mass exodus from Metro Manila following the imposition of government measures—such as the community quarantine—in response to the coronavirus pandemic.

Dalipe had been working as a construction worker in Parañaque City for only two weeks when the government announced the placement of Metro Manila under community quarantine effective March 15.

And hours before the clock struck midnight, Dalipe rushed to Alabang in Muntinlupa City in hopes of scoring a bus ride to his province.

(When I arrived in Alabang, I was going to ride a bus to Bicol. But it was approaching 12 midnight and I knew bus operations would shut down at midnight.)

Under the community quarantine, land, air, and domestic sea travel to and from Metro Manila were suspended until April 14. 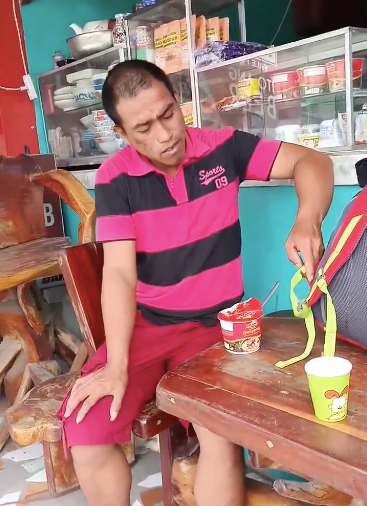 This prompted Dalipe to make a choice: if he cannot ride a bus, he will instead walk his way to his hometown.

The date was March 15, the first day of the quarantine. The sun has not even risen yet and under the moon Dalipe found himself walking to the province of Batangas.

When the sun rose, the heat became a problem but along the way, Dalipe found company with others who shared the same journey.

Dalipe said some of them were walking to Quezon, Masbate, and even as far as the Mindanao region.

From Alabang, Dalipe ended his first day of walking in Sto. Tomas in Batangas but for him, resting would only mean wasting valuable minutes.

“‘Di kami natulog kasi dahil ‘pag natulog kami, iisipin namin ‘yang lalakarin,” Dalipe said, adding that during the rare times that they could take a nap, they would do so outside establishments or in waiting sheds.

(We didn’t sleep because if we did, we’d just think about the long walk we still had to take.)

Dalipe may have had other people walking with him, but he said that the group was rather silent.

(We were all tired walking. Just walking. Even though we were a lot, we weren’t minding each other.)

The announcement was made last March 16, the second day of Dalipe’s walk to Camarines Sur.

The elevation of the quarantine meant the setting up of checkpoints as military officers checked those entering and exiting borders.

(When we reached Tiaong [town in Quezon province], we had a hard time crossing the checkpoint because it’s the border of Quezon. We pleaded to the police personnel manning the checkpoint, we said, ‘We are just going home.’)

As days passed and as Dalipe crossed more towns, cities, and borders, he made attempts to contact his family in Camarines Sur by dropping by barangay (community) halls.

(My phone ran out of battery so we would drop by community halls and ask officials to allow us to send messages to our family.)

Inching closer to destination and good will

It took Dalipe five days to reach the town of Tagkawayan, the town separating the provinces of Quezon and Camarines Sur.

There, Dalipe met Zenia Banagan who offered him free food after hearing his plight.

“Nagulat ako. Parang ako tuloy yung naawa. ‘Maupo ka nga muna,’ sabi ko kasi may upuan kami sa labas (I was surprised. I felt pity for him. I told him, ’Sit down first’, because we have a seat outside our home),” Banagan told INQUIRER.net in an interview.

“Naawa naman ‘yang mga tao ko. May biskwit na inabot sila tapos sabi ko pabaunan ng tubig kasi lalakad pa siya (My staff felt pity and they gave him biscuits that he could take with him. I also gave him water because he still had to walk),” she added.

In their conversations, Banagan said that Dalipe shared his stories about losing a lot of sleep and having sore feet because of his endless walking.

“Grabe pagkakatagal [ng paglalakad]. Parang lalo ako naawa, kainaman na ang hirap ang inabot nito (He walked for a long time. I felt bad, he had gone through so much hardship),” she said.

Banagan said that she later received a message from Dalipe’s father, who was so thankful to her for giving his son food to eat.

Dalipe finally reached home after walking for five days. He said he was telling himself one thing during his journey: “Makarating lang. Babawi na lang [ng pahinga] pagdating ng bahay (As long as I reach home, I’ll walk. I will just rest when I get there).”

“Nakahinga [ako] ng maluwag [pero] masakit ang paa ko (It was a sigh of relief but my feet were sore),” Dalipe said.

But when the situation becomes better, he will return to Metro Manila. He has no choice; life is not easy in the province, he said.

“Hirap maghanap ng trabaho. Hirap magka-pera. Nagbakasakali na lang sa Maynila. Hndi naman namin alam na ganyan ang mangyayari (It is so hard to look for jobs. It is hard to earn money. We tried our luck in Manila but we did not know it was going to end up like this),” Dalipe said.