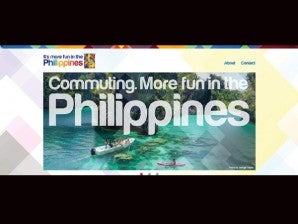 ILOILO CITY—Business owners on Boracay Island have welcomed the new campaign slogan of Department of Tourism (DOT), saying it will help boost tourist arrivals in the country.

Abriam said the slogan, “It’s more fun in the Philippines,” which was launched last week, was a catchphrase to which most tourists can relate.

“Filipinos are among the happiest and warmest people in the world, especially toward guests,” he told the Philippine Daily Inquirer in a telephone interview on Sunday.

He said the new slogan was “much better” than the previous one. Last year, the DOT launched but later withdrew “Pilipinas Kay Ganda” after the slogan drew controversy for the similarity of its logo to that of Poland.

The new one also drew criticism for being similar to the campaign motto of Switzerland in the 1950s. But the DOT has said this was coincidental.

Dionisio Salme, president of the Boracay Foundation Inc., said his group welcomed the new slogan. “It is catchy for all ages because it caters to a broad audience,” he said in a separate phone interview.

Tourists usually come as a family and many destinations in the country cater to the entire family, he said.

“Everyone travels to have fun because having a wonderful and unforgettable experience is the most important for tourists,” Salme said.

The way Filipinos and the Aquino administration have been having fun online with the country’s new tourism slogan indicates that they have accepted it, Malacañang said yesterday.

“Everybody is getting onboard, everybody is having fun with the slogan,” deputy presidential spokesperson Abigail Valte said in Manila. With a report from Christine O. Avendaño