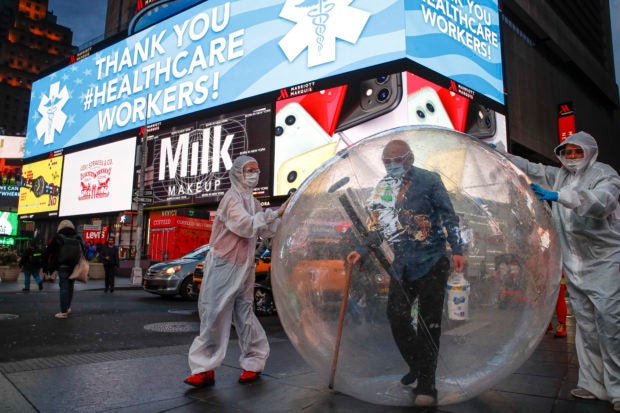 Artists perform under a billboard displaying thanks to healthcare workers due to COVID-19 concerns in a sparsely populated Times Square, Friday, March 20, 2020, in New York. New York Gov. Andrew Cuomo is ordering all workers in non-essential businesses to stay home and banning gatherings statewide. “Only essential businesses can have workers commuting to the job or on the job,” Cuomo said of an executive order he will sign Friday. Nonessential gatherings of individuals of any size or for any reason are canceled or postponed. (AP Photo/John Minchillo)

Flights were briefly suspended to New York City-area airports because of staffing issues after an air-traffic control worker tested positive for coronavirus. The number of confirmed cases statewide soared above 11,000.

More on the latest coronavirus developments Saturday in New York:

The goal is to quickly boost the state’s hospital capacity from around 50,000 beds to 75,000 beds, Cuomo said at a news briefing. The state has already hospitalized 1,600 people. The Federal Emergency Management Agency has declared a major disaster in the state, freeing up access to billions of dollars in relief funding.

The governor said the state is looking to see if Manhattan’s spacious Jacob K. Javits Convention Center, normally home to the auto show and other big events, could be suitable for 1,000 requested field hospital beds that would be supplied by FEMA in a “tent configuration” with equipment and staff.

On a parallel track, the state is scouting four locations for temporary hospitals that would be built by the Army Corps of Engineers. The possible sites include the Javits Center in the city, Stony Brook University and SUNY College at Old Westbury on Long Island, and the Westchester County Center north of the city. Sites will be reviewed Saturday, he said.

“Everything that can be done is being done,” Cuomo said.

New York state had more than 11,000 confirmed cases and 56 deaths, according to figures from Johns Hopkins University.

Officials have identified 2 million face masks that can be sent to hot spots, Cuomo said, and apparel companies are pivoting to make masks. One million masks are being sent Saturday to New York City hospitals, and 500,000 to Long Island. And with hospital gowns in short supply, the state is trying to obtain gown material for apparel makers, he said.

Because of dwindling supplies, hospitals have been rationing supplies and asking staff to reuse masks until they become soiled.
The state is also rounding up critically needed ventilators, purchasing 6,000 to deploy to the most critical areas and investigating whether multiple patients can be served by a single ventilator, Cuomo said.

“We are literally scouring the globe looking for medical supplies,” he said.

CLINICAL TRIALS
The state also will immediately conduct trials of an experimental COVID-19 treatment with hydroxychloroquine and Zithromax, Cuomo said.
Hydroxychloroquine, a malaria drug, has been touted by President Donald Trump as a possible answer-in-waiting to the outbreak, though many experts caution more testing needs to be done.

Cuomo said the Food and Drug Administration is sending 10,000 doses to the state.

Northwell Health, which operates hospitals in the New York City region, announced Friday that it was conducting clinical trials with remdesivir, an antiviral drug, and sarilumab, a human antibody that could prevent severe pneumonia complications.

Northwell said it is offering the trials to patients already hospitalized in its facilities with moderate and severe COVID-19 conditions, with a goal of improving recovery and speeding discharge.

FLIGHT DISRUPTIONS
The Federal Aviation Administration briefly suspended flights to New York City-area airports on Saturday after a trainee at a regional air-traffic control hub on Long Island tested positive for the disease.

In an alert posted online, the FAA advised air traffic controllers to “stop all departures” to John F. Kennedy, LaGuardia, Newark and other airports in the region because of staffing issues at the Ronkonkoma facility, which the agency says primarily handles high-altitude, cross-country flights.

The halt, which also affected Philadelphia’s airport, was lifted after about 30 minutes. Controllers were initially warned it could last several hours.
In a statement, the FAA said the Ronkonkoma facility remains open. The agency said the trainee was last there on Tuesday and that is it working to figure out what other workers he may have interacted with.

Air traffic controllers at Kennedy operated from an alternate location on airport property this week after a technician assigned to the airport’s control tower tested positive for COVID-19.

The FAA said that the technician hadn’t been to work since March 11 and that controllers returned to the tower after precautionary cleaning.

THRUWAY TOLLS
Toll collectors on the New York State Thruway will stop collecting cash Sunday night as a safety measure. Thruway operators say drivers without an E-ZPass tag should enter through a cash lane without taking a ticket when they enter the highway. When they exit the highway, drivers will need to tell a toll collector which exit they entered and provide license plate information. A bill will be sent to the owner of the vehicle in about a month. There are no changes for drivers with E-ZPass.