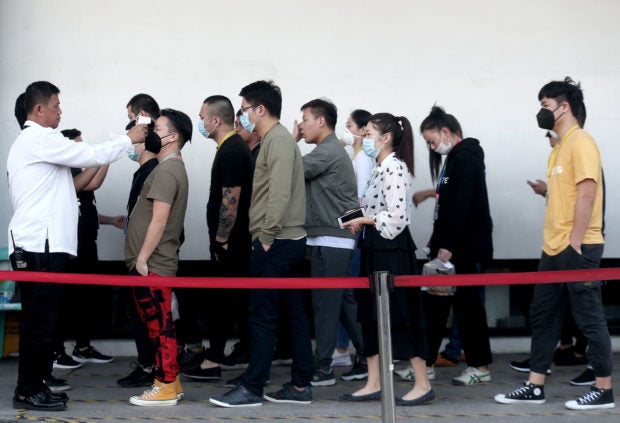 HIGH EARNERS According to Pagcor chair Andrea Domingo, Philippine offshore gaming operations or Pogos—whose Chinese employees are shown here being checked for fever as they enter a Parañaque City building in a photo taken on Feb. 5—can be “run from home’’ and continue to raise revenues for the government without contributing to the spread of the coronavirus. —RICHARD A. REYES

MANILA, Philippines — The Philippine Amusement and Gaming Corp. (Pagcor) on Saturday said it would provide P12 billion to government efforts to stop the new coronavirus disease (COVID-19) contagion and also pushed for the resumption of Philippine offshore gaming operations (Pogos) so it could raise more money to handle the pandemic.

Pagcor chair Andrea Domingo also asked the government to allow “junkets” and “e-junkets,” which are gambling arrangements of major casinos where high rollers are engaged to play.

Speaking at the government’s daily Laging Handa briefing, she said Pogos could be run “from home.”

“These are also BPOs (business process outsourcing), similar to BPOs they are allowed to operate,” she said.

Pogos alone generated P6.4 billion for the government last year. While that amount was 169 percent higher than collections in 2018, it was still short by P17.6 billion, based on the government’s projection of P2-billion monthly collection from Pogos.

Domingo said these high-earning operations could operate without contributing to the spread of SARS-CoV-2, the virus that causes COVID-19.

“These are segregated and the only players are foreigners. Sometimes, it is done over the phone,” she said.

As for the VIP players, there are usually only two players or sometimes just one per gaming table, Domingo said.

“So there is social distancing and all the areas are hygienic,” she added. “If these three operations would run, we would get back 50 to 60 percent of our income which could be given to help those who need it.”

The Pogo and casino operations were among those halted by the government after President Duterte imposed enhanced community quarantine on Luzon.

But there is already resistance to the Pogo work-from-home scheme.

The property administrators of at least two condominium buildings in the cities of Makati and Mandaluyong, both housing Pogo workers, had refused to allow their condo units to be turned into remote gambling centers and banned the entry of Pogo equipment into their buildings.

The Mandaluyong condominium cited restrictions and its own house rules that disallowed Pogo operations or “any form of commercial gambling.”

The one in Makati said the condo units were only for residential purposes with electrical systems designed to power only household items.

There were no immediate comments on Domingo’s plan from presidential spokesperson Salvador Panelo and Cabinet Secretary Karlo Nograles, who speaks for the Inter-Agency Task Force for Emerging Infectious Diseases, the government body which directs all government response to COVID-19.

Domingo said the P12 billion would be remitted to the National Treasury on March 24. She said the money came from Pagcor’s 2019 dividends, which Finance Secretary Carlos Dominguez III had sought.

In addition to the P12 billion and the earlier P2.5 billion, Pagcor has also allocated P100 million for food assistance, she said.

Help also came from several casinos, she added. Donations of P50 million each in food packs, medical equipment and supplies, and testing kits and machines came from City of Dreams, Resorts World and Okada, she said.

The Philippine Charity Sweepstakes Office (PCSO), the government lottery and charity agency, on Saturday said it was also providing financial assistance to the anti-COVID-19 campaign.

The Malasakit Centers in 14 hospitals in the Visayas and Mindanao would also get additional funds of P8.4 million a day, she said.

The PCSO also has P1.42 billion in standby funds waiting to be disbursed, Garma said.