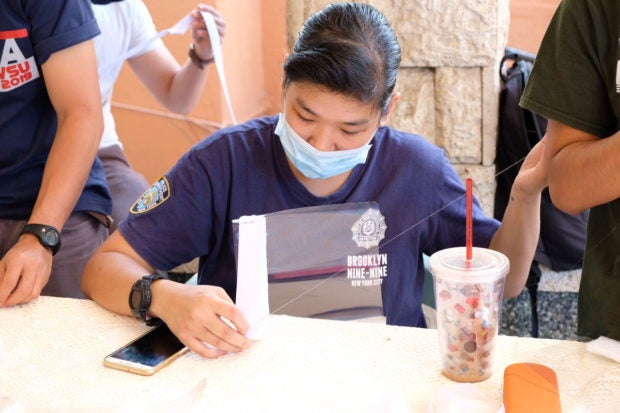 FIGHTING VIRUS An intern of the West Visayas State University Medical Center in Iloilo City joins her classmates in producing protective equipment for doctors, nurses and hospital personnel in the province. —NATHANIEL NADALA/CONTRIBUTOR

ILOILO CITY, Iloilo, Philippines — When 23 postgraduate medical interns were barred from hospital duty to prevent exposure to the new coronavirus disease (COVID-19), they refused to sit idly and do nothing. They decided to make themselves useful by making improvised face shields for hospital workers.

Medical workers in other hospitals now want to have their own face shields in the wake of a shortage of face masks in pharmacies and medical supply stores.

Interns working in Capiz hospitals and Western Visayas Medical Center in the city’s Mandurriao district are making face shields as well, using the design of their colleagues in WVSU-MC.

Hospitals decided to let go of their interns on March 14 following the surge of suspected COVID-19 cases in the country, in compliance with a memorandum issued by the Association of Philippine Medical Colleges (APMC).

The APMC ordered that interns should not be tapped for hospital duty since they are unlicensed and are not officially employed by medical institutions while at risk of being exposed to the coronavirus.

The directive disappointed the interns who were eager to help.

One of the WVSU-MC resident physicians, Seychelle de los Reyes of the Department of Pediatrics, told the interns to make face shields instead because the hospital had ran out of personal protective equipment (PPEs).

“Our seniors have come to us for help regarding additional PPEs as their supplies are depleted,” said Rhona MacEachen, 27, one of the interns from Central Philippine University’s College of Medicine.

Other doctors, she added, had earlier pleaded for PPEs because supplies of masks had run out in all public hospitals in Iloilo and front-liners were already wearing washable masks that could not protect them.

It was then that the 23 interns led by Frances Louise Herbolario started brainstorming about the design of a face shield through their online group chat.

MacEachen told the Inquirer that among those they discussed was whether to use garter or Velcro, grommets or puncher, or to staple or stitch the parts together.

“We thought that if we used a stapler, it would be convenient but dangerous. Grommet [is] expensive and using Velcro would render the mask unreusable,” MacEachen said.

“We made the face shields by punching holes on either side of the acetate/bookbinding cover sheets, used the double-sided tapes to attach a strip of insulating foam, and sewed the garter on both sides of the plastic for the structure to be sturdier,” MacEachen said.

Materials are also cheap at only P20 per piece. At least 50 shields can be made by eight people in two hours.

The interns started working on the first batch of improvised face shields at 10 a.m. of March 16. They dropped off the finished products at the entrance of WVSU-MC without getting off the vehicle to lessen exposure of the delivery team.

As of the afternoon of March 17, the WVSU-MC interns had produced at least 180 face shields and had given materials to another group so they could make 300 more pieces, MacEachen said.

Another group of interns were also working on 250 face shields to be given to those in Capiz Emmanuel Hospital in Roxas City for distribution to the front-liners of the province. 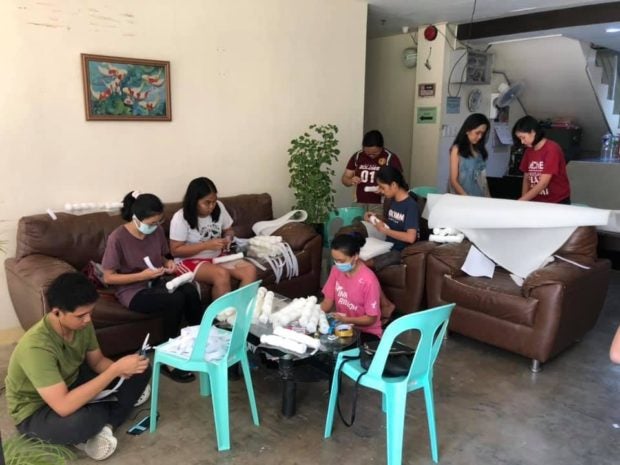 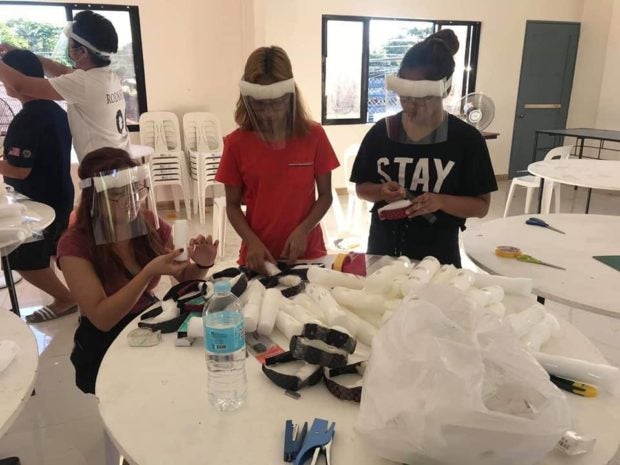 LENDING HAND Students of the University of the Philippines Visayas, who are stranded in dormitories in Miag-ao town, Iloilo province, help produce improvised face shields to be donated to front-line health personnel dealing with suspected COVID-19 cases. —HANNAH LABRADOR/CONTRIBUTOR

The face shield, worn over the face mask, has also gone viral online after MacEachen shared it on Facebook in the afternoon of March 16.

MacEachen said the doctors and consultants were happy with their product. “They spread the word within the medical community and soon, the demands and orders for the face shields came flooding in,” she said.

Since the interns didn’t want to burden the consultants and health workers for the cost of producing the face shields, they decided to ask for donations through social media.

As of March 17, the WVSU-MC interns had P45,000 in donations as they buckled down for work at the house of one of their colleagues.

To reduce the risks of spreading the virus infection while they work, the number of interns should not be more than 15 for every location. They should also wear face masks and carry their own sanitizers as part of health safety protocol.

The interns said they needed volunteers to be able to produce more.

It did not require a big group to help, as shown by Ma. Lana Jean Tabobo, a sophomore in communications and media studies at the University of the Philippines Visayas (UPV) campus in Miag-ao town in Iloilo.

With classes suspended, Tabobo and other students staying at the campus dormitory decided to make the face shields designed by the WVSU-MC interns.

“We cannot go home and we do not have anything much to do. So we volunteered so that we can help in our way,” she told the Inquirer.

Tabobo is among the students stranded in seven dormitories on campus due to the travel restrictions. Nine others are under self-quarantine in a separate dormitory after attending a conference in Manila.

Tabobo, 19, was supposed to go home to Zamboanga City after classes were suspended, but she called off her trip due to the travel restrictions.

Several alumni have donated basic necessities to the stranded dorm residents and food to those quarantined.

Rather than being idle amid a national health emergency, Tabobo said the students offered to help, especially the health workers who have appealed for donations of face masks.

Hannah Labrador, a UPV fisheries and oceanography student, said she asked help from her dorm mates following a call for donations from the Philippine College of Physicians-Western Visayas.

She brought the materials to the campus on Tuesday and her group was able to produce around 130 face shields in two hours. The items will be donated to personnel of Iloilo Mission Hospital in Iloilo City.

The students have put up three work stations, two on campus and one at a laundry shop at the Miag-ao town center. They formed teams which were assigned to do specific tasks like cutting of Velcro and foam strips and stapling these to the acetate sheet. 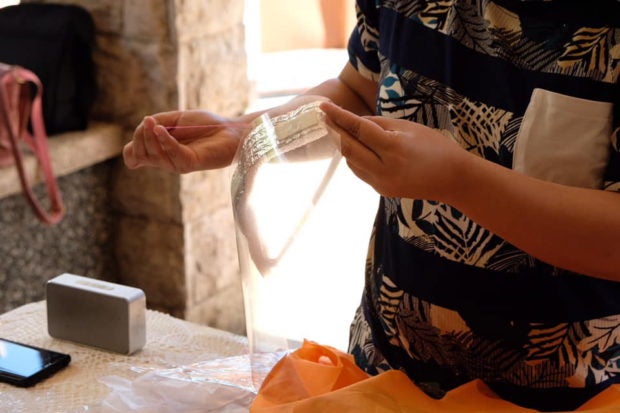 HANDMADE Bookbinding covers and insulating foam are among the materials used by students in making improvised face protectors for medical workers in Western Visayas. —NATHANIEL NADALA/CONTRIBUTOR

Several alumni and town residents are also helping in the production of the face shields, according to Labrador.

In Cebu, another group of interns has initiated a donation drive for medical supplies in hospitals in the province and in Cebu City.

The donated surgical and N95 masks, alcohol, gloves and raincoats would be distributed to government hospitals where persons under investigation (PUIs) for COVID-19 are confined, said John Caro Ybañez, a third year medical student of Cebu Institute of Medicine and the school’s student council president.

A day after their campaign started on March 15, four boxes of surgical masks, six boxes of gloves, a few N95 masks, two gallons and two bottles of alcohol had been collected.

“In times like this, you can see the power that the community holds. We still urge those who have more than enough and have some equipment to spare to please help our front-liners by donating these resources,” Ybañez said.

“Our front-line doctors and nurses can use all the help they can get right now with the increased workload, while at the same time preparing for the fact that the number of PUIs can easily increase soon,” he said.

Since hospitals could not just replenish supplies immediately, they saw the donation campaign as a quick way to acquire the needed items, he added.“It is a way for the community to help our health care front-liners,” Ybañez said.

The student leader also urged those with more than enough medical supplies to give these to those who needed them more.