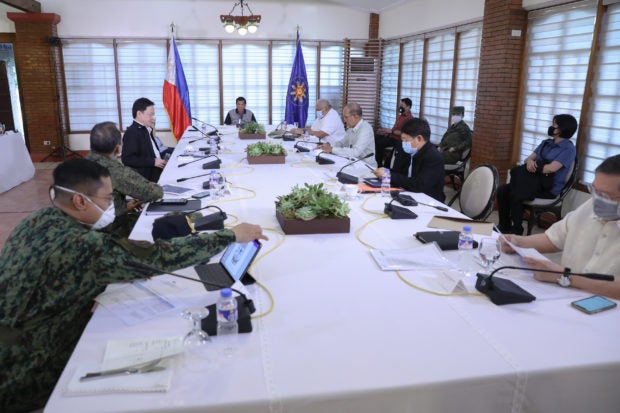 LATE NIGHT AT THE PALACE President Duterte holds a meeting with the officials of the Inter-Agency Task Force for the Management of Emerging Infectious Diseases on Thursday night. He would later appear in a taped broadcast aired at 1:20 a.m. the next morning. —MALACAÑANG PHOTO

President Rodrigo Duterte ordered local officials to strictly follow the protocols set by an ad hoc government body tasked with controlling the spread of the new coronavirus and not to abuse their authority or face sanctions as the government implemented a lockdown on Luzon.

In a taped message broadcast at 1:20 a.m. on Friday, he called out local governments that deviated from measures laid down by the Inter-Agency Task Force on Emerging Infectious Diseases (IATF-EID) to stop the contagion from SARS-CoV-2, the virus that causes the acute respiratory disease COVID-19.

“I am ordering all LGUs (local government units) that are doing this to stand down, and to abide by the directives of the IATF … and those issued by the Office of the President, and to make sure that what the IATF says should be closed, is closed, and those that should be open, stays open,” Mr. Duterte said.

He said he directed the Department of the Interior and Local Government (DILG) and the Department of Justice (DOJ) to monitor the compliance of local governments with his directives. Cases would be filed against “wayward officials.” he added.

“I know you have the mandate to deal with emergencies affecting your localities. I was a mayor myself, in case you have forgotten. But this is an emergency of national proportions, and therefore it is the national government that should call the shots,” the President said.

Interior Secretary Eduardo Año, a member of the IATF-EID, has repeatedly said that the main means to contain the virus was to stop people from moving around and that meant shutting down public transportation, including the tricycles, the ubiquitous three-wheel motorcycle taxis.

“My job is how to make people stay at home,” he said at a press briefing in Malacañang on Friday.

Mr. Duterte himself acknowledged the difficulties in halting public transportation, including buses and trains, but reasoned that the “magnitude of the threat that we are facing calls for it.”

He admitted that he regarded the enhanced community quarantine he imposed on Luzon as a “lockdown, simply because the contagion continues to take its toll in the countryside.”

One local government move that was criticized and ordered stopped by Año was Pasig Mayor Vico Sotto’s decision earlier this week to allow tricycles to ferry people exempted from the quarantine, like health workers or those needing medical assistance.

IATF-EID officials said tricycles were too cramped to allow social distancing, one means to avoid infection.

In compliance with the DILG position, Sotto stopped all tricycle operations. He took that initiative following what the President told Metro mayors last Monday, to come up with “any measure” to protect public health, order and safety, and “whatever is needed to make life more livable in your place.”

Metro Manila Police Chief Maj. Gen. Debold Sinas visited Pasig on Friday and was “very happy” that Sotto complied with the order of the DILG.

He said he instructed the Pasig police chief to send home drivers who violate the no-tricycle order and arrest them if they do not comply.

The President also noted reports of cargo being blocked at checkpoints and attributed the obstruction to local government regulations.

“Let me be clear to everyone. So when the IATF says: ‘Do not restrict the flow of cargo of whatever type,’ then no LGU should say that they only follow or allow food or essential goods to come in. You are setting already your standards, and making this quarantine more difficult for all,” Mr. Duterte said.

Farmers and fishermen’s groups have complained that their produce were being blocked on their way to Metro Manila at police checkpoints.

Sought for comment, Police Brig. Gen. Bernard Banac, the Philippine National Police spokesperson, said the delays may have been caused by other checkpoints as local governments imposed lockdowns outside the national capital.

He said the flow of food supplies for the national capital had improved after authorities provided separate lanes for basic commodities and emergency transport.

PNP-manned checkpoints at the main entry points of Metro Manila, such as North Luzon Expressway, South Luzon Expressway, MacArthur Highway in Bulacan and Batasan-San Mateo Road at the border of Quezon City and Rizal province, have reported faster flow of goods, he said.

Following reports that some local governments in the Visayas and Mindanao enforced their own restrictions that led to the blockage of cargo and stranded commuters, Año said they should have first coordinated with the national government to avoid confusion.

He said some local officials ordered the cancellation of flights to local airports, an authority that did not belong to them.

“That belongs to another department … A lot of people got stranded because some LGU officials declared domestic flights canceled,” he said.

One of the officials was Mr. Duterte’s daughter, Davao City Mayor Sara Duterte-Carpio, who ordered on Tuesday the suspension of all domestic and international flights to and from Davao City as a measure to control the spread of the virus in her city.

The cities of Puerto Princesa and Cebu also canceled domestic flights from Clark International Airport, which stranded more than 100 passengers heading to Visayas and Mindanao. —WITH REPORTS FROM KRIXIA SUBINGSUBING, MELVIN GASCON AND JODEE A. AGONCILLO