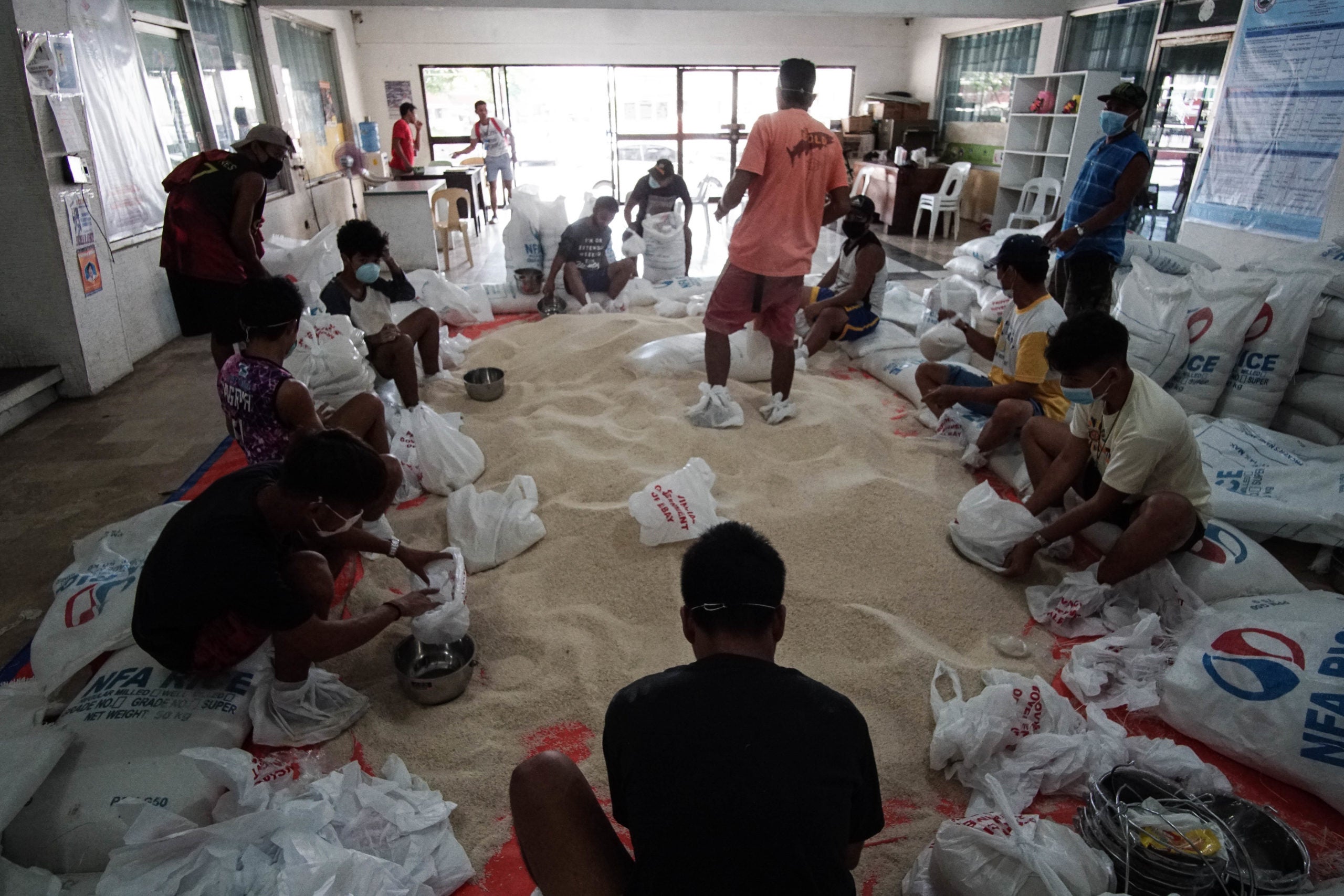 HELPING HANDS Workers of the provincial government of Albay repack rice on Thursday for poor residents affected by restrictions imposed by the national government to halt the spread of the newcoronavirus in the country. The beneficiaries from Albay’s 18 cities and towns will be identified by the provincial social welfare and development office. —MARK ALVIC ESPLANA

Some senators on Thursday proposed a special session to provide for a supplemental budget for dealing with a possible public order and financial crisis that may arise from the monthlong quarantine of Luzon due to the coronavirus pandemic.

Senate President Vicente Sotto III, who said the budget could amount from P50 billion to P100 billion, has brought up the matter with Finance Secretary Carlos Dominguez III, who is expected to discuss it with President Duterte.

Many of Sotto’s colleagues support his proposal.

Sotto said the government should provide cash assistance to families to help tide them over.

He said the people might run out of food by next week, hence the need to remove any impediments to the swift use of public funds.

“I suggest for Congress to pass a food subsidy budget in order to provide for the daily wage earners who lost their income,” he said.

The ideal amount would be P500 a day for every family, but P300 a day would have to do given the country’s financial constraints, he said.

The rates could vary in provinces that have access to fish, vegetables and other basic food supplies, he added.

Sotto said the subsidy would ensure that the poorest of the poor would not go hungry.

It could also be applied to other regions threatened with limited food supplies because of the “no work, no pay” policy of some private companies.

“Money is food. Food is security. Security is peace and order,” he said.

He also said Luzon was the one that needed the budget the most, but eventually the entire country would need this help.

Sen. Christopher Go also called for a special session to approve a supplemental budget so that the government could provide food and financial assistance to people adversely affected by the quarantine.

Go said the government had enough funds, but people should not be complacent because the problem was “evolving.”

Sotto also said that while experts and the government had called for home quarantine and social distancing, government officials should make an exemption.

The special session could be held with a skeleton force, he said.

“Lawmakers should bite the bitter pill in an emergency situation such as this. We need to get on our feet and make sure that our people, especially the poorest of the poor, do not worry about going hungry at a time when they should be focusing their attention on staying healthy,” he said.

He said Go had told him that President Duterte had agreed to call Congress to a special session and write the congressional leaders about it on Friday.

Sen. Sherwin Gatchalian urged private businesses to release swiftly the P5,000 cash aid for their employees, saying the workers need the funds now and decrying the red tape in the process.

Gatchalian said the workers from the formal and informal sectors should not be made to wait for the money because they need to provide for the needs of their families every day.

He noted that the P1.3-billion assistance package under the COVID Adjustment Measures Program could only be released within two weeks of receipt of all applications at the regional offices of the Department of Labor and Employment.

“The problem with [the] government is red tape and we need to release the funds now. We should not make the affected employees wait because if we don’t give them the funds now, they might return to the streets to try and earn money for their families,” he said.

The labor department could work with local governments to identify people covered by the program, he said.

It could also reduce the number of requirements so that the subsidy could be released quickly, he added.

Gatchalian proposed a “bridge loan package” for micro, small and medium enterprises so that they could pay the salaries of their workers.

Also on Thursday, the Department of Education (DepEd) said public school teachers would receive their salaries for March and April this month.

Education Undersecretary Annalyn Sevilla said releasing the March and April salaries was on the DepEd’s “priority list” of financial tasks to complete “as soon as possible or within March.”

The Alliance of Concerned Teachers, the largest teachers’ union in the country, welcomed the DepEd’s effort to help the teachers but also reiterated its call for the release of the delayed 2018 performance bonus of the mentors.

Five of the country’s largest employer and business organizations on Thursday urged their members to advance the release of the 13th-month pay and other benefits to help their workers.

Ecop president Sergio Ortiz-Luis Jr. said many companies had heeded the call of business organizations to help their workers.

“Some of the measures taken by employers, in addition to the early release of [the] 13th-month pay, include allocation of other monetary incentives, leave cash conversion payout and loan assistance, as well as deferment of payment of existing loans, activation of hazard insurance for all customer-facing employees, and utilization of leave credits, even those allotted for 2021 in cases when leave credits for 2020 have already been exhausted,” Ortiz-Luis said.

Light Rail Manila Corp., the operator of LRT Line 1, said on Thursday it was providing transportation and financial aid packages for its employees, tenants and medical staff to help them through the quarantine and prepare for the resumption of operations. —WITH REPORTS FROM MATTHEW REYSIO-CRUZ, STEPHEN C. CANIVEL AND KRIXIA SUBINGSUBING