WASHINGTON  — President Donald Trump said Wednesday that he doesn’t think calling COVID-19 the “Chinese virus” — or the “kung-flu,” as one administration official reportedly called it — puts Asian Americans at risk of retaliation despite growing reports they are facing virus-related discrimination. 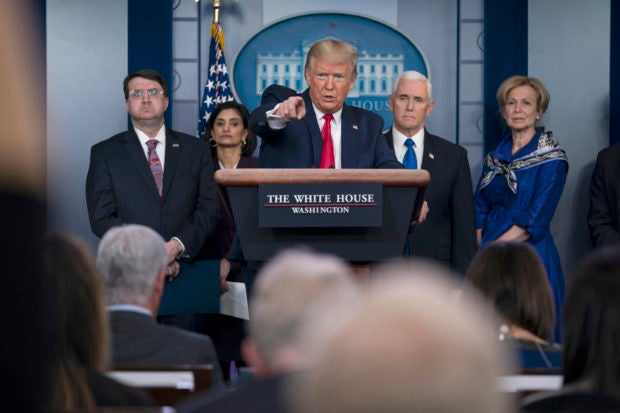 Since coronavirus infections started appearing in the United States in January, Asian Americans have shared stories of minor aggression to blatant attacks from people blaming them for the pandemic, which has killed more than 130 people in the United States.

Among the hate crimes reported in major cities with Chinese communities: An Asian man in a Brooklyn subway car who was yelled at and sprayed with Febreze air freshener.

In Los Angeles, a 16-year-old boy of Asian descent said other students had bullied him and accused him of carrying the virus. Even before cities began shutting down all restaurants to stop the spread of the virus, Chinese restaurant owners were already experiencing steep declines in business because of racial stigma.

Asked why he keeps calling the coronavirus the “Chinese virus” when scientists say the disease doesn’t respect borders and is not caused by ethnicity, Trump told reporters at the White House that he doesn’t consider it a racist remark.

“It’s not racist at all,” Trump said, adding that he calls it the “Chinese virus” because he wants to be accurate. He indicated his terminology was a warranted pushback to Chinese officials who have been suggesting the U.S. military might have introduced the virus to Wuhan, the Chinese city where it was first reported in late 2019.

“China had tried to say at one point — maybe they stopped now — that it was caused by American soldiers,” Trump said. “That can’t happen. It’s not going to happen, not as long as I’m president. It comes from China.”

Beijing has complained, but Trump administration officials continue to link the virus to China.

At a State Department news conference on Tuesday, Secretary of State Mike Pompeo referred six times to the virus as the “Wuhan virus” and suggested the Chinese were trying to distract the world from the shortcomings of its initial response. Pompeo also suggested that an “after-action” report would corroborate his claim, suggesting that U.S.-China tensions are unlikely to end when the pandemic is over.

Reports of anti-Asian violence are on the rise along with white nationalist rhetoric about the coronavirus on social media and far-right websites, according to Eric Ward, director of the Western States Center, a group based in Portland, Oregon, that works to strengthen inclusion.

“We have an irresponsible president who continues to refer to COVID-19 as a Chinese virus. That is intentional,” Ward said. “And at a time of great panic and fear, that will only lead to physical violence.”

“It is going to be critically important for community leaders, elected officials and others to step up their resistance to hate groups and their goal of dividing a united America.”

John C. Yang, president and executive director of Asian Americans Advancing Justice, said Trump’s comments were reminiscent of the late 1800s, when Chinese Americans were deemed the “yellow peril,” despite living in the United States for years.

“For us, words matter,” Yang said. “In reality, Chinese are not more genetically prone to transmit the virus. What we all need to do is focus on our public health.”

He noted that the World Health Organization has cautioned against using geographic descriptors because it leads to ethnic discrimination. Yang said terms like “kung-flu” are not jokes.

“That’s racial stereotyping, and it’s just not funny,” Yang said. “This is not comedy when it leads to verbal and physical assaults against a community.”
During a White House briefing on the coronavirus, Trump was told that an unidentified administration official had used the term “kung-flu.” The president was asked whether using a term like “Chinese virus” puts Asian Americans at risk.

On Tuesday, CBS reporter Weijia Jiang had tweeted that a White House official had called the coronavirus the “Kung-Flu” in front of her. She did not identify the official, but Jiang mentioned the remark Wednesday morning to Kellyanne Conway, counselor to the president.

“Of course it’s wrong,” said Conway, who wanted to know the identity of the official. She called the reference “highly offensive” and noted that she was married to an Asian American and that her children were 25% Filipino. “Why don’t we go to the source and tell them that’s very hurtful and unhelpful.”

After the news conference, the White House defended the president’s language, saying that previous epidemics, such as the Spanish flu and West Nile Virus, were named for geographic locations. They labeled the controversy a “fake media outrage.”

“Those trying to divide us must stop rooting for America to fail and give Americans real info they need to get through the crisis,” the White House tweeted.

But the “Spanish” flu is a misnomer. The strain is theorized to have actually developed in Kansas. Because newspapers on both sides of World War I censored most early news of the outbreak for the sake of public morale, Spain, which remained neutral, freely reported on influenza, giving the impression it had originated there.

Elsewhere, a group of Asian Americans in entertainment and fashion launched a social media campaign called #WashTheHate on Wednesday in an attempt to combat xenophobia related to the coronavirus. Supporters posted videos of themselves washing their hands for 20 seconds while talking about how they’ve been affected by virus-fueled racism.

Among them was actor Tzi Ma, who portrays the title heroine’s father in Disney’s now-postponed “Mulan” movie. The Asian American community has to speak up, he said, especially when Trump and other officials use these kinds of labels for the virus.

“We can never get off the soapbox. These things rehash themselves all the time,” Ma said. “I don’t see an end to it particularly, when our leadership is overtly racist. They’re not even censoring themselves.”

For most people, the coronavirus causes only mild or moderate symptoms, such as fever and cough. For some, especially older adults and people with existing health problems, it can cause more severe illness, including pneumonia.

The vast majority of people recover from the new virus. According to the World Health Organization, people with mild illness recover in about two weeks, while those with more severe illness may take three to six weeks to recover.