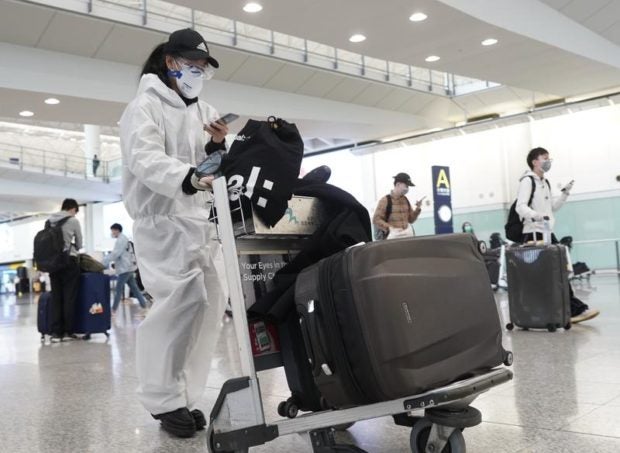 HONG KONG — Another trap is about to be sprung on Hong Kong and mainland students scrambling to get back home from the United Kingdom, as the epicenter of the coronavirus outbreak has shifted from China to Europe, where infections have continued to spike since early March.

The government decided on Sunday night to impose a two-week home quarantine, which takes effect from Thursday, for arrivals from the UK and the United States — two of the most popular locations for overseas Chinese students. Tens of thousands flock to the airports within the three-day window period.

The city’s quarantine list was once again extended on Tuesday to cover travelers arriving from any foreign countries, in sync with the ever-shifting strategies of governments everywhere in their attempts to contain the coronavirus.

Students in Britain told China Daily they are terrified that the British government might adopt the contentious “herd immunity” strategy. The theory is to build up immunity by allowing 60 percent of its population to become infected by the deadly virus.

Elena Chow, a university junior from Hong Kong attending school in London, said most of the Chinese students she knows plan to fly home in the coming two weeks. Her university finally agreed to suspend on-campus classes for the remainder of the term.

“Most people on the streets still don’t wear masks. If you’re Asian and wear a mask, you are not welcomed, even on campus. It’s really a matter of life and death,” said the 20-year-old.

The young woman tried to get a ticket home after learning about Hong Kong’s new quarantine policy, while all direct flights were fully booked in hours, although “unreasonably expensive”.

Major airlines have axed nonstop flights between China and Europe amid the pandemic. Coupled with surging desires to get back home, the cost of an economy-class seat from London to Hong Kong soared to three times higher than its seasonal average, according to statistics China Daily retrieved from three booking apps on Tuesday.

“One of my classmates was very excited after getting a seat on a flight home for about HK$33,000 (US$4,250). I told her it’s too early to be happy,” said Chow, referring to a group of 20 Chinese students, many in protective gear, stranded at Heathrow Airport in London after their flight was cancelled at the last minute.

“The risk of infection on the road can never be underestimated especially at crowded transport hubs. I have to accept quarantine rules, though I don’t like them,” she said, adding that she has given up trying to circumvent the quarantine deadline.

Chow intends to fly home next week on a Cathay Pacific flight. After a meeting with Chief Executive Carrie Lam Cheng Yuet-ngor on Friday, the airline said it would arrange nine more flights this week to pick up students in the UK.

Joining in Hong Kong students’ anxieties are other Chinese students, faced with drastic cuts in airline services to mainland cities. They were turning to indirect flights transiting Hong Kong International Airport after other major airports, such as Singapore Changi Airport, have denied them entry. Hong Kong’s sudden expansion of its quarantine rules caught them off guard.

Joyce Wu, a postgraduate student at the University of Leeds in England, booked a flight to Hong Kong and a second flight through another airline to Shanghai, just one hour before Hong Kong’s quarantine rules were tightened on Sunday night.

“The authorities said I am likely to be denied boarding in London, if I am unable to get home without entering Hong Kong,” she said, fearing she may have to enter Hong Kong to check in for the last leg of her flight.

Chinese-mainland passport holders are permitted to stay in Hong Kong for less than seven days, shorter than the forced quarantine period of two weeks. They are thus unlikely to be allowed to enter Hong Kong, the city’s immigration authorities noted.

Wu has no plans to ask for a refund, though she managed to secure a ticket to Beijing. “There could be other policy changes in the next minute. One flight may also be scrapped. I will keep them both. Returning home is everything.”

As of Tuesday, the UK had recorded at least 1,950 infections and 56 fatalities. More than 69,000 people have contracted the coronavirus in Europe.

Wu is in a newly founded chat group with over 300 Chinese students stranded in the UK. They are sharing tips on how to return to the mainland after landing at the Hong Kong airport. The number of inbound mainland visitors through the airport rose to 1,662 on Monday, nearly three times the number a week ago, official figures revealed.

An immigration officer at the Shenzhen Bay checkpoint, who asked not to be identified, said the past two days have seen a “significant increase” in mainland people coming from Hong Kong to Shenzhen. This checkpoint is the only land port still open for arrivals at the airport to get to Shenzhen.

He expected the passenger flow would peak today.

About 90 percent of Hong Kong’s coronavirus cases were either imported or related to their close contacts in the past two weeks, including a cluster infection of five people on the same Cathay Pacific flight from London.

At least 10 patients whose infections were confirmed somewhere else had transited at the Hong Kong airport in March, including a 13-year-old student returning from Switzerland to Shenzhen, and a 19-year-old student back from Spain to Dongguan.

Two Hong Kong students, aged 21 and 27, were confirmed to be infected by the virus on Tuesday. They had all developed symptoms before flying home from London on Monday night.

Lawmaker Alice Mak Mei-kuen of the Federation of Trade Unions said the government should also dispatch chartered flights to the UK, considering the scarcity of seats, so that students will not be forced into a similar situation faced by passengers aboard the coronavirus-stricken cruise ship in Japan. Mak said many parents have reached out to the party for help after becoming worried about the UK’s handling of the disease.

Owing to limited flights, many are expected to miss the window to arrive home before the toughest-ever quarantine takes place. Students swarming back to the city will also put pressure on the city’s quarantine camps. A further strain on quarantine facilities is expected as the government has decided to bring back home within a week a second batch of about 500 Hong Kong residents stranded in Hubei province, where COVID-19 broke out late last year.