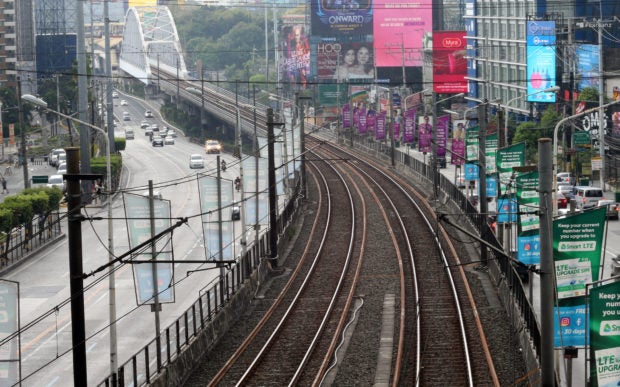 FEELS LIKE HOLY WEEK With the public transport suspended under the enhanced community quarantine in Luzon, MRT’s tracks are quiet and traffic is light on Edsa. —EDWIN BACASMAS

MANILA, Philippines — As President Rodrigo Duterte placed the entire region of Luzon under enhanced community quarantine, transport officials on Tuesday began announcing sweeping closures of both public transport systems and roads with the intention of keeping people at home.

According to the new guidelines for the monthlong quarantine which will last until April 14, “all operations of land transport modes such as public utility buses and jeepneys, taxis, transport network vehicle services (TNVS), UV Express, point-to-point buses and motorcycle taxis shall be suspended.”

The goal, said Cabinet Secretary Karlo Nograles, was to keep everyone in their homes and prevent the further spread of the novel coronavirus disease (Covid-19).

As of Tuesday, all four major transit lines—Light Rail Transit (LRT) Lines 1 and 2, Metro Rail Transit (MRT) 3 and the Philippine National Railways—have been suspended until April 12 “or earlier as advised by government.”

The Parañaque Integrated Terminal Exchange also suspended its operations on the same day.

Meanwhile, ride-sharing services like Grab, Angkas and JoyRide have put on hold their operations in Metro Manila although Grab promised to continue its delivery (courier) services to help bring essential goods to the public.

Several public utility vehicle (PUV) operators have also ordered their drivers not to go on the roads lest their vehicles get impounded.

While the quarantine encloses the entire region, major road closures would have impeded provincial travel anyway.

The closures, however, led to several frontliners—health workers, security personnel—stranded and unable to get to work, as only private vehicles were allowed to ply the roads.

On Tuesday morning, netizens recorded several commuters left stranded on major thoroughfares like Philcoa and Commonwealth Avenue, as only a few public transport vehicles were spotted.

In one video, commuters were seen scrambling to get onto a small pick-up truck which was supposedly asked by the local government’s traffic enforcers to ferry stranded commuters.

Thus far, most local governments have deployed PUVs to pick up those who need to go to work. INQ