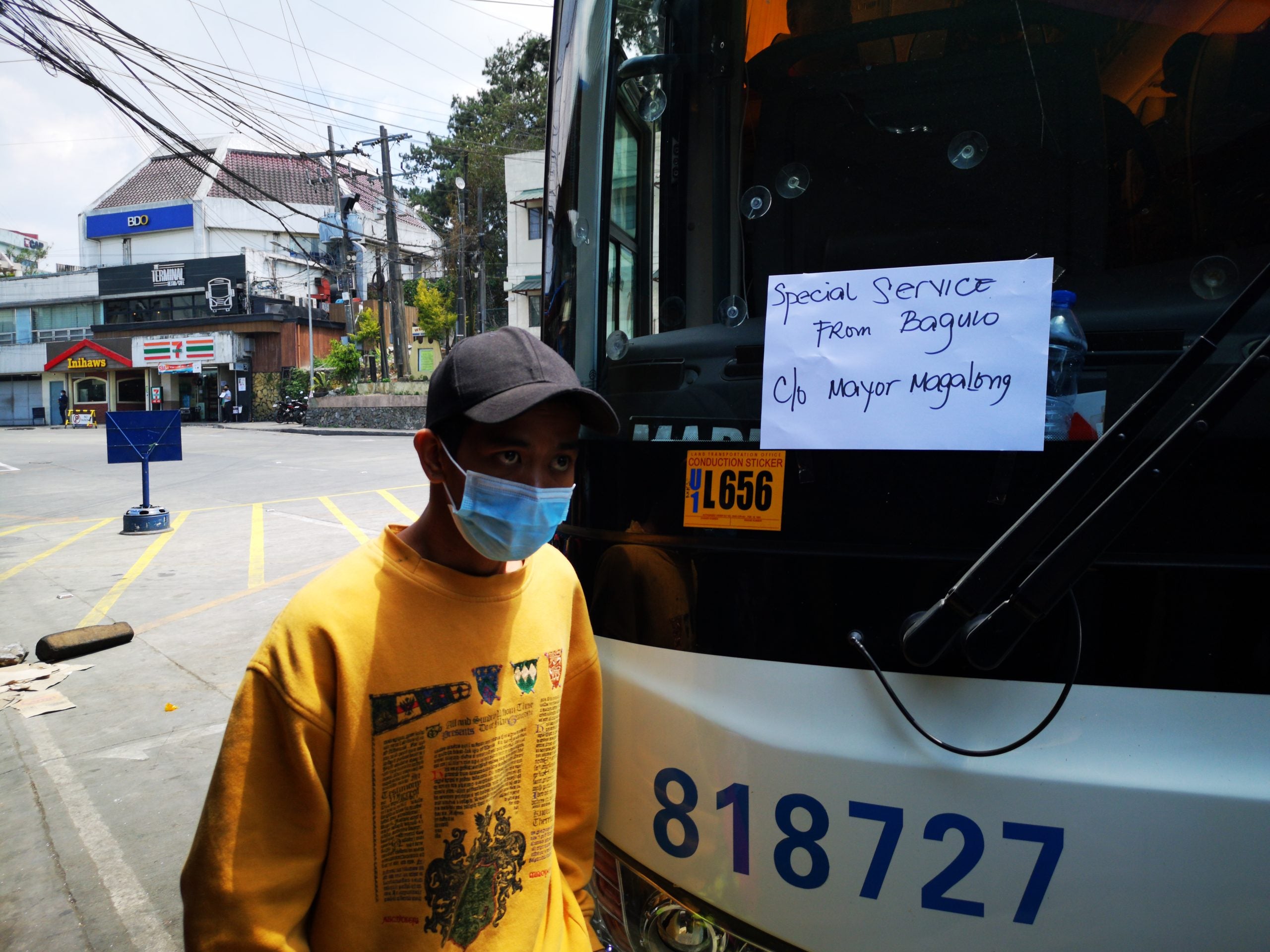 SAFE PASSAGE. Public transport was suspended when President Duterte orders a Luzon lockdown to prevent the spread of the coronavirus disease on Monday (May. 16). But transient workers who were stranded here were driven home in special service buses commissioned by the Baguio government on Tuesday (Mar. 17). Photo by EV Espiritu

BAGUIO CITY — At least 200 students from Japan and South Korea were cleared for travel out of the summer capital on Tuesday afternoon (Mar. 17) so they can fly back home through the Clark International Airport before Wednesday night (Mar. 18).

The students were enrolled in 32 English language schools which suspended classes when Baguio, and later the whole Luzon island, were placed on expanded quarantine to prevent the spread of the novel coronavirus disease 2019 (COVID-19).

Many of the students have been in the city for a month and were housed in school campuses where some underwent mandatory isolation, said Reuben Aslor, vice president for human resources of Pines International. A few

Some of the students arrived two weeks ago and found themselves stranded here until Mayor Benjamin Magalong issued them safe passage clearances so they could be driven straight to CRK.

The students will still need to present their papers at checkpoints set up by local governments between Baguio and CRK in Pampanga province, Aslor said. “But at least they may now leave. Some have already booked flights out of the country,” he said.

Baguio also sent out transient employees and businessmen who were trapped here on Monday night(Mar. 16) when President Rodrigo Duterte ordered the immediate closure of Luzon.

They were driven down on Tuesday to the provinces of La Union, Pangasinan, and Tarlac by buses at the behest of the city government, Magalong said.

Transient students who want to go home until the quarantine is lifted may also coordinate with bus companies that have agreed to transport stranded people despite the suspension of all mass transport services.

Many residents walked to and from downtown Baguio because jeepneys and taxis are barred from city streets until April 12. Households raced to groceries and the market to stock up on food for the week, but many had to walk home carrying boxes of food.

At a Tuesday briefing, Magalong said he has coordinated with village leaders so public utility vehicles can serve families who need to go out to buy food or medicine. Because everyone is required to stay indoors, only a member of the household may be driven to town after registering with their respective village governments.

PUVs will be allocated according to a schedule when the villages can draw together a sufficient number of people, the mayor said. Because of quarantine protocols, a jeepney may only carry fifty percent of their vehicle’s capacity. Passengers must also wear masks, whether surgical devices or cloth, “to prevent any exchange of body droplets,” Magalong said.

At a separate news conference, Mario Iringan, Cordillera director of the Department of the Interior and Local Government said families can also coordinate with neighbors who have cars and set up “car pooling” trips to buy food or take ailing people to the hospital.

Although the general quarantine protocol requires each vehicle to have only one passenger, local governments may innovate for as long as they do not transmit the disease, Magalong said.

People could even try negotiating with bicycle concessions at Burnham Park and hire bikes so they can take groceries home, Magalong said, when that idea was suggested at the news conference.