Without public transport, workers resort to walking for hours

MANILA, Philippines — Nico Acosta has yet to begin his day at work at the Manila City Hall but he’s already clearly exhausted. He rushed to get a glass of water and get himself rehydrated.

Acosta just walked for two hours from Quezon City to Manila. He was one of countless of workers in Metro Manila affected by the suspension of public transport as part of the enhanced community quarantine imposed in Luzon in response to the novel coronavirus disease 2019 (COVID-19).

Acosta, who lives in Quezon City, said he had to get to Manila City Hall for work—but there was no public transport in sight.

“I can’t get any ride whether jeep or taxi,” he said in Filipino. “When I reached Welcome Rotonda, there were tricycles going to Quiapo but charging P50 per person,” he said in an interview with INQUIRER.net. Welcome Rotonda is the boundary between Manila and Quezon City.

“So I just decided to buy myself something to drink and I just thought about it as an exercise,” he said, referring to his decision to walk all the way to Malacanang.

It only usually takes him 30 minutes to travel from Quezon City to Manila when riding a jeepney. On a bad day, it takes him nearly an hour, at most.

The streets were rather quiet with only a few vehicles—mostly private—passing by. Along the way, however, Acosta said he met other individuals who also seem to be heading to work. Like him, they were walking. 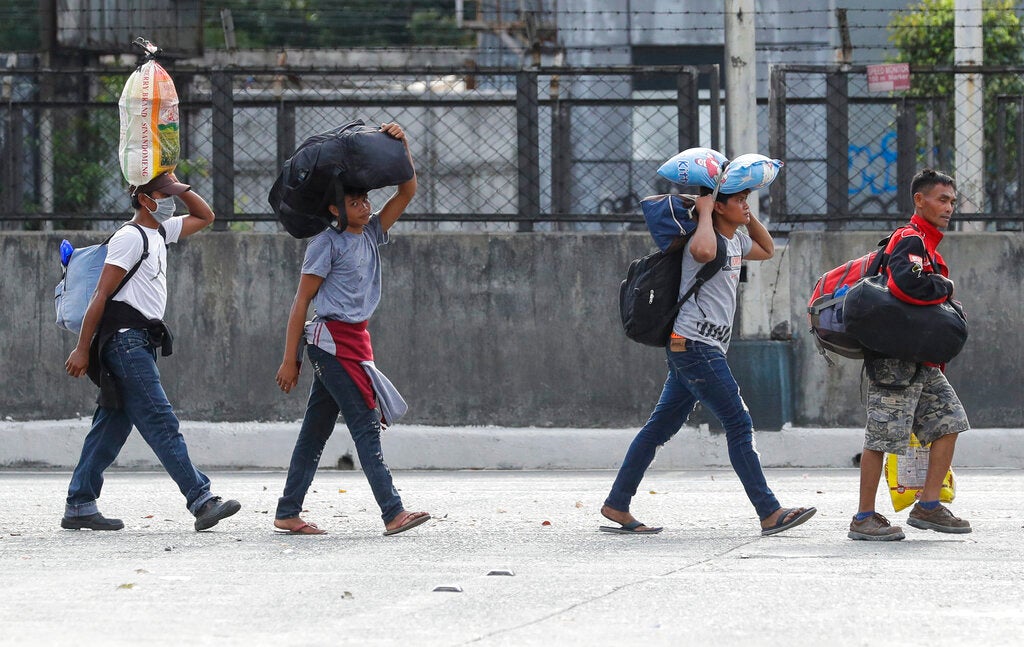 Workers carry their belongings to a bus station to get back to their province while the government implements a localized quarantine as a precautionary measure against the spread of the new coronavirus in Luzon. (AP)

The strenuous walk was not the only problem, Nico said.

“Fortunately, the sun was covered by the clouds so the heat was not painful to the skin,” Nico said in Filipino.

“I just focused on walking because when you start thinking about being tired, you will just struggle and I just thought that this is just an exercise,” he said.

Acosta said he was surprised when the suspension of mass transport was announced, especially as the timeframe between the time of the announcement and the time of its effectivity was merely a few hours.

“I was surprised because how can workers, especially those in frontline, go to work? They will have a hard time,” said Nico.

He said he wished shuttles would be provided for workers so simply going to work would not be a struggle.

However, Acosta said he remained optimistic that the quarantine in place would really help prevent the spread of the virus. 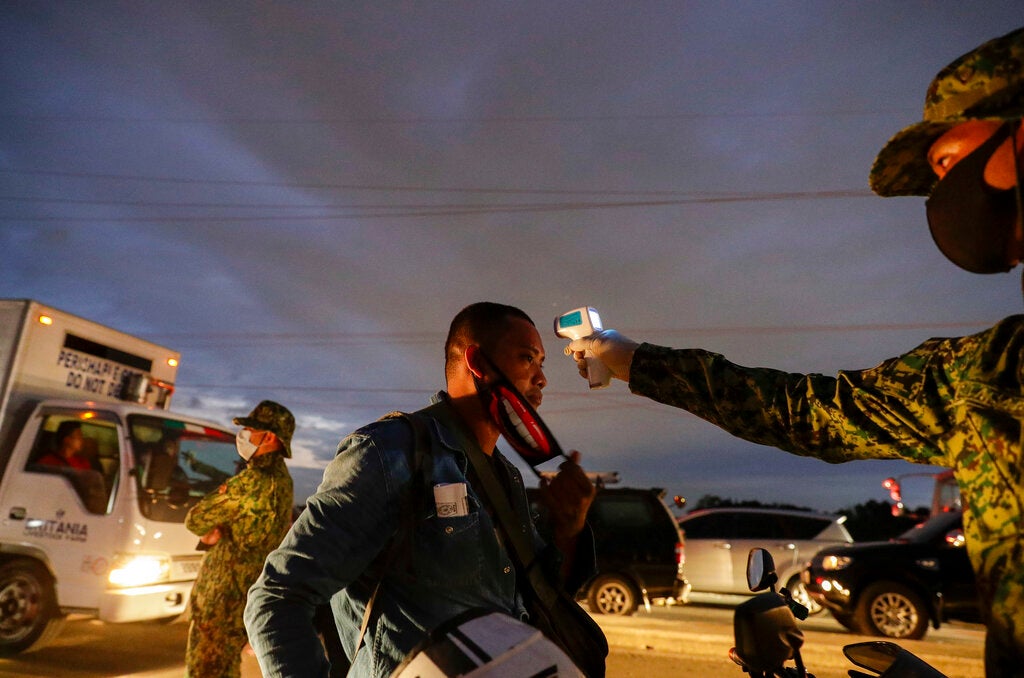 A police officer checks temperatures of people at a checkpoint. (AP)

It was presidential spokesperson Salvador Panelo who first broke the news about the enhanced community lockdown on Luzon island. This announcement, however, did not come with details or guidelines.

Later in the night, around 8 pm, President Rodrigo Duterte officially made the declaration about the enhanced community quarantine.

In a press briefing past 9 p.m., Cabinet Secretary Karlo Nograles, reading a memorandum issued by Executive Secretary Salvador Medialdea, said that as a part of the quarantine, public transportation will be suspended all over Luzon effective midnight of March 17 or merely three hours from the time of announcement.

This was reflected in an advisory posted by the Department of Transportation (DOTr) on its Facebook page at 11:25 p.m. announcing that operations of mass public transport in and out of Metro Manila are suspended.

In a phone interview with INQUIRER.net, Panelo said the Metropolitan Manila Development Authority (MMDA) is preparing measures to address the mobility problems of those who are stranded in Metro Manila.

“We already fixed it. Trucks will be coming out, bus companies already opened, there are already designated areas. The MMDA is designing a system,” Panelo said in Filipino.

“All of that is being fixed,” he said.

In a separate statement, Panelo also said that army trucks will also be deployed.

“We immediately communicated such concern to the Department of National Defense (DND) and Secretary Delfin Lorenzana and the latter swiftly directed the Armed Forces of the Philippines (AFP) to bring out their army trucks to ferry those who are stranded, particularly health workers and other individuals exempted from the ban, so they can be safely brought to their places of work and their homes after work,” Panelo said. 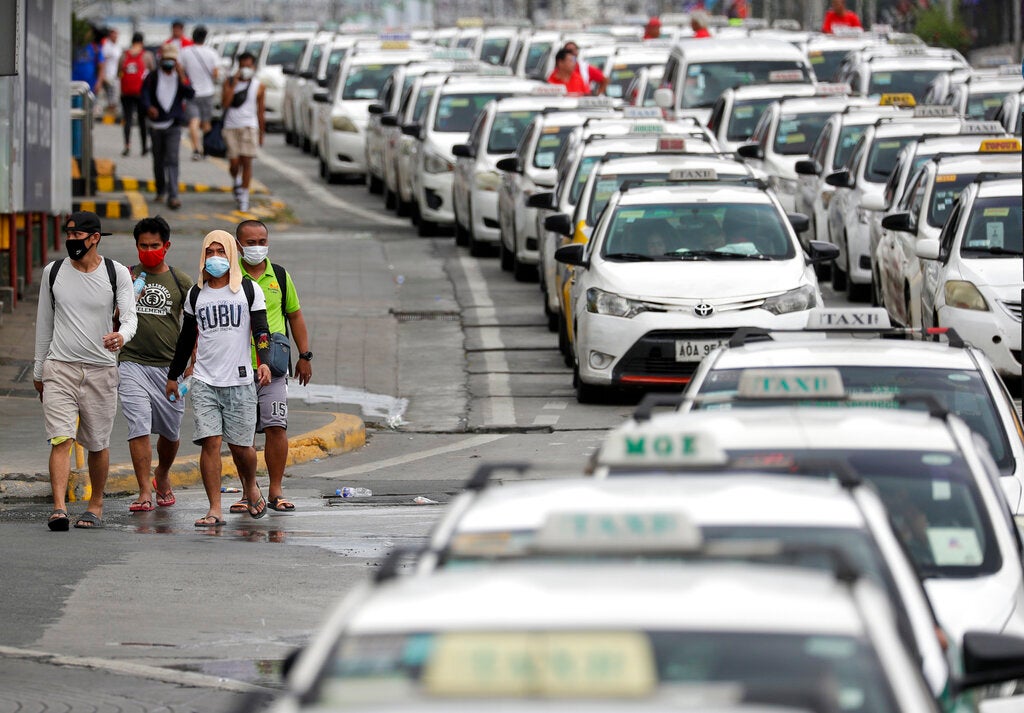 Men wearing protective masks walk beside rows of taxis that were instructed by police to stop operations while the government implements the “enhanced community quarantine” in Luzon. (AP)