Lorenzana: Military ops vs NPA to ‘take a backseat’ to focus fight vs COVID-19 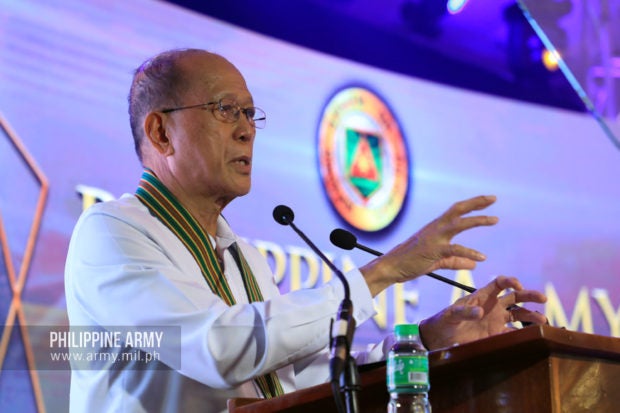 MANILA, Philippines  — The Philippine military’s operations against communist rebels may have to scale down for now, as it shifts its focus on the new coronavirus threat, Defense Secretary Delfin Lorenzana said Tuesday.

His statement comes after President Rodrigo Duterte called on the New People’s Army for a truce as he placed the entire island of Luzon on community quarantine to address the rapidly spreading disease.

“Ceasefire muna tayo. Ako na ang nanghihingi, ceasefire [Let’s have a ceasefire for now. I’m asking you]…Kindly give me that,” Duterte said in a televised address on Monday night.

The Armed Forces of the Philippines have been tapped to assist the Philippine National Police in enforcing the enhanced community quarantine in Luzon, which covers more than 30 provinces.

“Operations against the NPA will take a backseat for now as we focus on this COVID crisis nationwide,” Lorenzana told reporters.

“The NPA heard the President. It’s up to them. Our troops will be conducting peace, order and security operations as usual and be in the defensive against attacks,” the secretary added.

Communist Party of the Philippines founding chair Jose Maria Sison, meanwhile, said Duterte should formally make a ceasefire offer, which will be studied by the CPP and the National Democratic Front of the Philippines.

“It will be related not only to the common fight against COVID-19 but also to the resumption of the peace negotiations,” he said.

Duterte formally terminated the peace talks with the communist rebels in March last year, but later in December, he brought it up again with his Cabinet officials the possibility of resuming peace negotiations.