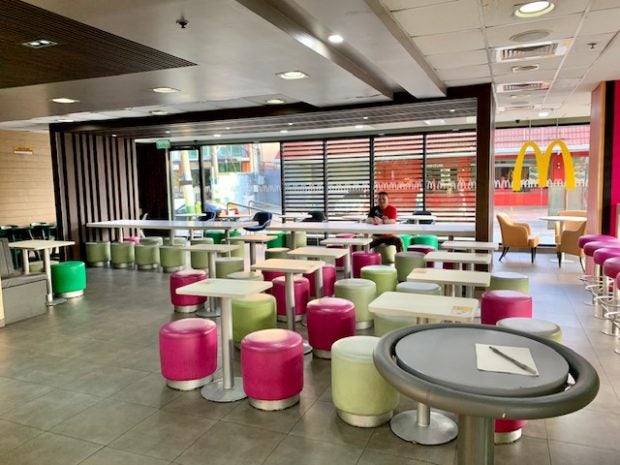 ALMOST EMPTY; A solitary customer waits for his order at a fast-food restaurant in Parañaque, following the lockdown of the National Capital Region. —CATHY CAÑARES YAMSUAN

The “community quarantine” in Metro Manila is beginning to take its toll on workers and businesses.

Luisa, a 28-year-old hotel employee, does not dread contracting the new coronavirus but fears not being able to work and earn, which have come to pass because of the 30-day quarantine in the metropolis.

“Not knowing where to get the money to buy my needs in the next coming days or how I would be able to pay my bills is more depressing,” said Luisa, who along with a dozen of her colleagues, has been placed on forced leave for more than two weeks without pay.

“Worse, I have a father to support, too. How will I buy his medicines?” she told the Inquirer.

She and other agency-hired hotel employees have been asked to take a leave because the hotel needed to scale down its manpower as some of its restaurants would be temporarily closed.

“I can’t afford to lose a job right now, even for just two weeks, because it’s no work, no pay for me,” she said.

The pandemic would cause some 650,000 Filipino families in Metro Manila alone to become the “new poor,’’ according to Sen. Risa Hontiveros.

Hontiveros appealed to the Duterte administration to make available P10,000 in cash assistance to each of those who would lose their jobs because of the various government restrictions in enforcing the metro­wide quarantine.

While many people have been panic buying, she said, others were already “in panic as they had no money to buy” food and other basic needs.

“The government should immediately track down and extend (cash) assistance to these households which will mostly come from vulnerable contractual workers and workers in the informal economy,” the senator said.

A restaurant in Quezon City has also served notice to suspend work beginning March 20 due to the reduced number of customers over the past week, according to the Trade Union Congress of the Philippines (TUCP).

“Out of its 11 employees, four of them were retrenched and placed on an on-call status,” said TUCP spokesperson Alan Tanjusay.

Tanjusay said the number of workers losing their jobs would still increase with government plans to shut down shopping malls.

“Daily paid and no-work, no-pay employees who work in restaurants in malls are telling us that they don’t agree with [the] government’s plan to shut down malls because there are no concrete assurance from government officials that workers who lost jobs will be provided with financial assistance,’’ he said.

The TUCP earlier said it was in favor of a selective shutdown of malls to reduce job losses.

Tanjusay placed the number of retrenched workers so far at 4,000, including the 300 that Philippine Airlines let go because of the drop in passenger demand and travel restrictions.

The Federation of Free Workers (FFW) said workers were willing to support efforts at controlling the virus, but, according to the group, the socioeconomic impact of the lockdown and mall shutdowns, and how these were being implemented were not considered by the authorities.

Julius Cainglet, an FFW vice president, said daily paid workers, whether regular, probationary, contractual or agency-hired, would have no means to survive, let alone live decent lives. “Even monthly paid workers have no assurance that they will get paid leaves for going under quarantine or for simply failing to report for work under the circumstances.”

Other workers and businesses are feeling the impact of the ban on land transport to and from Metro Manila and social standing.

At least two bus companies based outside Metro Manila would rather suspend operations than ply their routes with only half the regular number of passengers and thus not break even, according to a bus operator.

He and other bus operators are appealing to the Departments of Transportation and the Department of Finance for a moratorium on loan payments during this period.

jeepney driver Emilio Millares, 55, who plies the route between Biñan City in Laguna province and Barangay Alabang in Muntinlupa City, said he could only take eight people per trip because of social distancing in public vehicles, which requires one-seat apart between passengers of buses or jeepneys. He drives a 16-passenger jeepney.

“We do want to follow the government, but how are we even going to meet our daily boundary (an average) of P500 to P800,” Millares said on Sunday, the first day of the community quarantine in Metro Manila.

George San Mateo, president of the Pagkakaisa ng mga Samahan ng Tsuper at Operator Nationwide, said his group was urging the government to order oil firms to cut down the cost of diesel, currently at P33 per liter, or provide subsidies to drivers in areas affected by the social distancing scheme.

Several senators have called on the administration to immediately put together a financial aid program for those adversely affected by the quarantine.

Members of the Senate minority bloc urged President Duterte to convene a special session of Congress to pass a supplemental budget to help cushion the economic impact of the pandemic.

Sen. Joel Villanueva said the Civil Service Commission had pledged support to his proposal for the government to pay for the salaries of contractual employees of various state agencies, which may have to temporarily close down during the metrowide lockdown.

—With a report from Leila B. Salavaerria