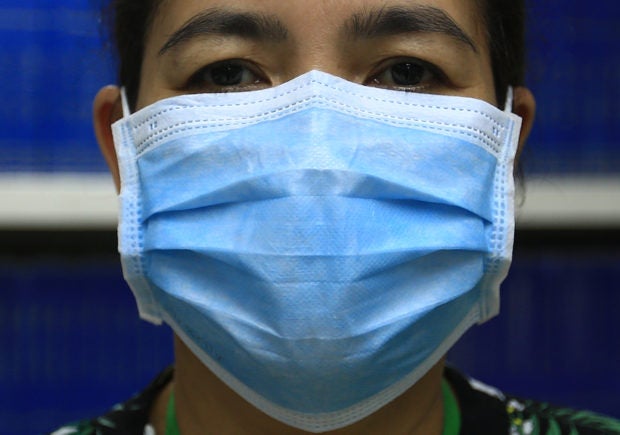 MANILA, Philippines — Front-line health workers are themselves becoming more at risk of contracting the new coronavirus due to the shortage of face masks and other personal protective equipment (PPE) in hospitals.

At Jose R. Reyes Memorial Medical Center, a doctor who spoke to the Inquirer on condition of anonymity, said staff members had been buying their own face masks after supplies ran out. The hospital is just beside the Department of Health (DOH) head office in Manila.

Rizal Medical Center (RMC) in Pasig City faces the same situation. According to a medicine student assigned there, nurses have been wearing their masks for the entire duration of their shift. Typically, face masks are replaced every four hours.

A supplier for the Philippine General Hospital (PGH) failed to deliver the 90,000 masks needed by the hospital in Manila.

A nurse the Inquirer talked with still goes to PGH although he has had a cold for days now.

Under normal circumstances, he would have already gone on leave—to look after his well-being and reduce the risk of infecting his patients. But he and other doctors and nurses—not a few of them also feverish—do not have that luxury now.

If health workers were to go on leave or be placed on quarantine, this would seriously impact the staff complement.

The Philippine Heart Center (PHC) in Quezon City is limiting its services because 13 staff members became classified as “patients under investigation” after being exposed to a coronavirus patient who has died.

Compounding the problem is the monthlong suspension of classes in Metro Manila, which has prompted medical schools to pull out their students—who would have been front-liners at the ERs, taking vital signs and other routine procedures.

Without them, the doctor at Jose Reyes said those tasks would fall on senior physicians who themselves had their hands full.

Under DOH guidelines, with the alert level raised to Red Sublevel 2, there would be an augmentation of medical staff, and also of uniformed personnel, “from unaffected communities/regions.”

Most cases are in Metro Manila, but there are also reported cases in Rizal, Cavite, Bulacan, Pampanga, Negros Oriental and Cagayan de Oro City.

There is no plan, as of now, to bring more health workers into Metro Manila.

A nurses’ group, Filipino Nurses United (FNU), said it was not very hopeful that the government would initiate this kind of intervention, given the limited number of health workers in the whole country.

“There are many unemployed nurses [who] are just waiting to be tapped,” Maristela Abenojar, FNU president, told the Inquirer. “If they would allocate funds for this, it may be possible [to hire them].”

Hospitals in the provinces are also undermanned and do not have adequate supply of PPEs and other equipment, she pointed out.

A barangay clinic in Gubat town, Sorsogon province, is unable to monitor the temperature of people who recently arrived from Metro Manila, following the national capital region’s lockdown, because its digital thermometer had no battery.

Abenojar called for mass hiring of medical workers in the government so it would be able to implement a community-based approach against the coronavirus. Under that strate­gy, health workers would go to the communities to look for possible cases.

This way, the DOH would be able to immediately detect mild cases and not wait for yet another patient with already serious symptoms of infection.

Health Secretary Francisco Duque III had pointed out earlier that Iran may have had a high fatality rate because of weak surveillance of mild cases.

At 7.8 percent, the country’s death rate is nearly double the global average of 4 percent.

—With reports from Nestle Semilla and Connie Fernandez-Brojan