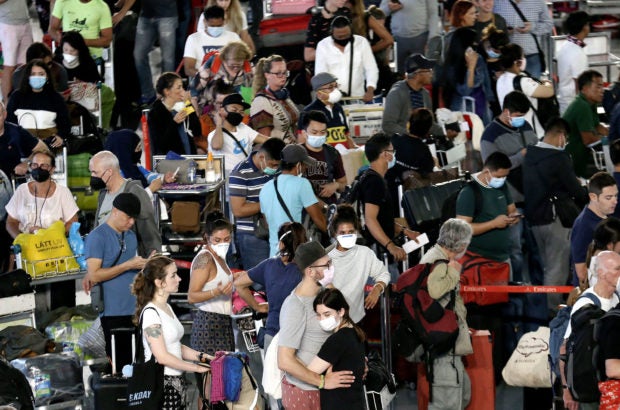 DEPARTURE: Passengers are seen at Ninoy Aquino International Airport Terminal 3, a few hours before the effectivity of community quarantine in Metro Manila. (Photo by RICHARD A. REYES / Philippine Daily Inquirer)

MANILA, Philippines — The Department of Health (DOH) on Sunday reported 29 new coronavirus cases and four more deaths, bringing the total number of infections in the country to 140 and fatalities to 12.

Among those who died was an employee of the House of Representatives who had tested positive for the new coronavirus although he had no history of travel to any country with confirmed cases of the disease called COVID-19. He died on Sunday.

The 41-year-old staff member of the House Printing Service, who was identified only by his first name, Brandon, had been suffering from a number of ailments and had been in and out of the hospital, according to House Secretary-General Jose Luis Montales.

“It is with deep sadness that we inform you that Brandon from our Printing Service passed away this morning. He left behind his loving parents, wife and two children,” Montales said in a message to House members and staff.

Among the latest to die was an 86-year-old American male who lived in Marikina City and had traveled to the United States and South Korea.

He had preexisting conditions, including hypertension and diabetes, and had suffered from acute respiratory distress syndrome due to community-acquired pneumonia caused by SARS-CoV-2, the virus that causes COVID-19.

The third fatality was a 64-year-old man from Negros Oriental province who recently traveled to Greenhills in San Juan City, Metro Manila. He had a known case of chronic renal disease. He died on Sunday morning.

The DOH did not name the man, but he was reported to be Hermie Cerna, a municipal councilor in Tayasan town.

Bimbo Miraflor, the provincial spokesperson, said the councilor’s two maids had fever, sore throat and cough and were considered patients under observation for the coronavirus.

A 27-year-old woman who was under observation for the coronavirus in Cebu City on Sunday had been tested for the virus, but the results of the test had not returned when she died. It wasn’t immediately clear if she would be considered a COVID-19 fatality.

The woman’s death prompted Mayor Edgar Labella to place the entire city under “community quarantine” to prevent the virus from spreading locally.

On Saturday, the DOH reported that two patients had died, identifying them as patients 89 and 79.

Patient 89 was a 67-year-old male from the City of San Fernando, Pampanga province, with no travel history. He died of acute respiratory disease on Wednesday, but had several preexisting medical conditions.

Patient 79 was a 68-year-old male from Makati City with no travel history or exposure to a confirmed coronavirus case. He died of acute respiratory disease on Saturday, but also had other medical conditions, including hypertensive cardiovascular disease.

Assistant Health Secretary Maria Rosario Vergeire said two of the coronavirus cases had recovered and five had been placed on home quarantine.

“The two patients who recovered were the Chinese nationals (patients 1 and 3) who were diagnosed in late January and who already returned to their country,” Vergeire said in a television interview.

“The six other confirmed COVID-19 cases were placed on home quarantine because they have mild symptoms,” she said. “The decision to place under home quarantine was based on our current decision tool for the diagnostic and management of COVID-19. We feel they’re safer at home because there is bigger chances that they might get infected with other illnesses in the hospitals. But they remain under strict monitoring while at home.”

Health Secretary Francisco Duque III said in a separate television interview that a further increase in infections was expected as the DOH expanded its testing capacity and continued tracing the contacts of confirmed cases.

Also on Sunday, Malacañang said it was glad that several government officials had tested negative for the coronavirus.

“We are glad to know that they are healthy and were tested negative for COVID-19. They will continue to perform their respective duties in the service of the Filipino people,” presidential spokesperson Salvador Panelo said.

Medialdea said he would still quarantine himself and Tugade said he, too, would take the same precautionary measure as recom­mended by the DOH.

On Thursday, President Duterte and Sen. Christopher Go were also tested for the coronavirus. The results of their tests returned negative.