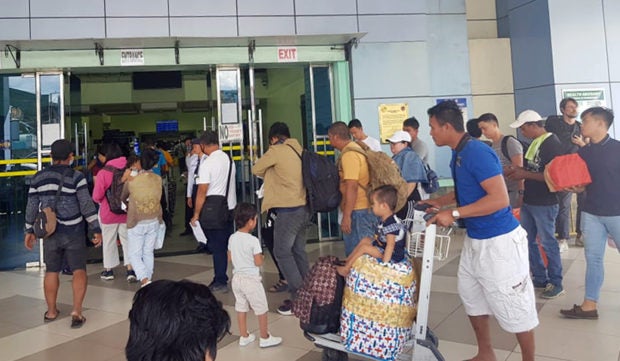 At least 41 provinces and cities across the nation have closed their borders as more local government units (LGUs) have imposed community quarantine and travel restrictions in the face of a looming widespread transmission of the new coronavirus disease (COVID-19).

As of late Sunday, those who have declared a community quarantine similar to what has been imposed on the National Capital Region were the provinces of Cebu, Oriental Mindoro, Bohol, Antique, Aurora, Camiguin, Iloilo, Batangas, Batanes, Marinduque, Ilocos Norte, and Ilocos Sur; the cities of Iloilo, Ormoc, Davao, Zamboanga, Cagayan de Oro, Cebu, Roxas, and Puerto Princesa; and 21 towns.

In Cebu province, Gov. Gwendolyn Garcia prohibited the entry of people from domestic airports or seaports for a month starting on March 17. Even Cebu residents, who may want to return to the province during the period, were not exempted from the prohibition.

Inbound travelers from countries with COVID-19 cases, such as Italy and Spain, entering Cebu from foreign destinations via Mactan Cebu International Airport were also included in the ban.

The monthlong community quarantine imposed by Iloilo and Antique also will start on Monday.

Garcia, in her executive order, said cargoes and deliveries of supplies would be allowed entry but would be subjected to stringent measures.

She also canceled all mass gatherings and events and imposed a 10 p.m. to 5 a.m. curfew and disallowed restaurants to operate beyond 9 p.m.

The city of Cebu, while independent of the province, adopted the directive of the governor.

In Davao City, Mayor Sara Duterte ditched an earlier directive that required at least two confirmed COVID-19 cases in separate villages before a certain area could be put on quarantine and placed the city on a monthlong community quarantine on Sunday.

The mayor said limitations on the availability of testing kits and the urgency for an “aggressive and proactive” action prompted her decision.

Under the executive order, Duterte outlined rules that must be strictly followed, which, among others, required all residents to stay inside their homes except when they needed to go to work, to the hospital, or to dispose of trash, or buy food and medicines.

She suspended public gatherings, classes in all levels and religious activities until the lifting of the state of public health emergency declaration in the country.

The mayor’s decision came after raised concern over passengers from Metro Manila coming to Davao City through Clark International Airport, increasing the possibility of bringing the virus to the city.

“Doctors want to contain everything in Metro Manila, and yet Manila passengers are allowed to fly out of Clark to Davao City,” she said.

She also urged neighboring towns and cities to put up their own quarantine area for their own patients under investigation because if they won’t, “I will close Davao City and you will have no access to hospitals and other essential services.”

While there were no confirmed COVID-19 cases in Western Visayas, the provinces of Iloilo and Antique also barred all nonessential inbound travel and imposed border restrictions as part of measures to contain the spread of the virus.

Iloilo City and the municipality of Malay in Aklan, which has jurisdiction over Boracay Island, have also heightened precautionary measures including a mandatory 14-day quarantine for tourists arriving on Boracay Island.

Iloilo Gov. Arthur Defensor Jr. on Sunday restricted travel to the province. Residents returning to the province have until March 17 to travel. Those violating the restriction shall be placed under quarantine for 14 days at the Dr. Ricardo Y. Ladrido Memorial District Hospital in Lambunao town, Iloilo.

In Negros Oriental, which has one COVID-19 death, will not impose a community quarantine, even as its residents were now barred from entering Cebu. Instead, the body temperature of every incoming passenger at every seaport, airport and bus terminal will be checked and those who are coughing will not be allowed to board.

Iloilo City also tightened restrictions on Sunday, prohibiting nonessential entry of persons traveling by sea from March 16 to April 14. This includes passengers of vessels coming from Metro Manila, Batangas seaport, and those who have traveled to 120 countries with confirmed COVID-19 cases.

In Antique, Gov. Rhodora Cadiao imposed border restrictions for two weeks starting on March 17. No inbound and outbound travel will be allowed except for medical supplies and goods. Antique is one of the four provinces on Panay Island.

In Ormoc City, officials led by Mayor Richard Gomez also imposed a no-sailing policy where its port terminals, mostly from Cebu, are being secured to ensure that no boats and passengers coming from outside the city could enter. Gomez also discouraged Ormocanons from living in Metro Manila to return home.

“If you love your families, you should sacrifice and should not come home until the situation gets better,” he said in a message on Facebook.

Elsewhere in Eastern Visayas, border checkpoints were put in place by almost all LGUs to monitor the people going in their respective areas.

In Olongapo City, the Subic Bay Metropolitan Authority (SBMA) on Saturday night said entry to the free port would be restricted, only allowing workers and residents with identification cards issued by the agency. The regulated entry will start at 12 a.m. on Monday, March 16 until 12 a.m. on April 14 while the public health emergency is still in effect.

SBMA Administrator Wilma Eisma said the restriction would not cover locators, residents or those who are employed and studying inside the free port, provided they show no symptoms of COVID-19 and that they leave the free port on the same day.

In Ilocos Norte, Gov. Matthew Manotoc on Sunday placed the province under community quarantine despite having no confirmed case of COVID-19. Manotoc said he issued an executive order for the declaration in anticipation of a virus infection. He said policemen would monitor people entering the province.

In Aurora province, acting Gov. Christian Noveras banned the entry of tourists and nonresidents to prevent transmission of the virus. He said exempted from the ban are those who would deliver food and nonfood supplies, provided they observe strict preventive measures. These supplies would be inspected at the entry points, he said.

Travel restrictions were also imposed in Baguio City and in Apayao and Mountain Province. Checkpoints were installed in these areas so health workers could take thermal scans of motorists and commuters.