BAGUIO CITY, Benguet, Philippines — From birth to death, traditional woven fabrics have been part of daily life of people in the Cordilleras.

Ifugao women carry their children on their back in blanket slings called “oban.” The men wear the “bahag” while the women wear the “tapis.”

The dead are wrapped in sacred woven blankets.

In contemporary times, however, the indigenous fabrics are threatened with extinction.

Patis Tesoro, dubbed the “doyenne of Philippine Fashion,” acknowledges that traditional weaving and embroidery is a dying culture and art because skilled embroiderers and weavers rarely pass on the skill to the next generation, many of whom are reluctant to continue the laborious art.

Designers must continuously innovate and create marketable products for the industry to survive, she says.

The fashion designer spoke during the “Kulay at Kapas” (Color and Cotton) conference at the University of the Philippines Baguio on March 6, stressing the need to embrace modernizing traditional garments to help weavers appeal to the younger generation.

While some designers welcomed the idea, elder artisans may be angered by it, according to Bontoc weaver Graal Cawed.

Cawed, who is among those who recognize the need to modernize the craft to cope with changing times, says she wants to draw the line when it comes to what she called “vulgar” designs and using sacred ritual cloth such as the death wrap.

Modernizing the textile industry does not just mean designing woven fabric for mainstream use, she says. It may be in the form of simple alterations, like putting extra snaps on tapis belts for added security, or making these permanent for easier wear. 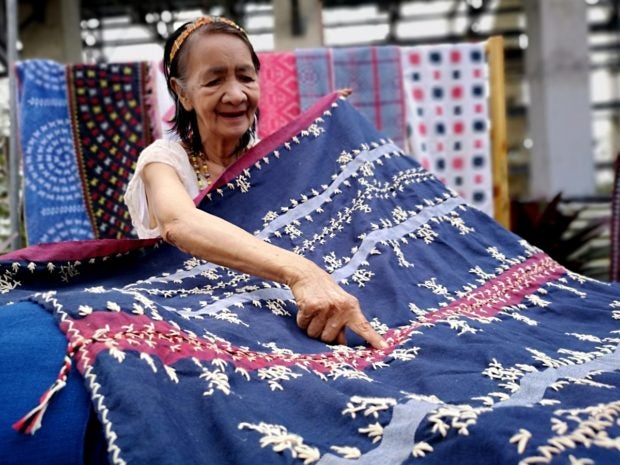 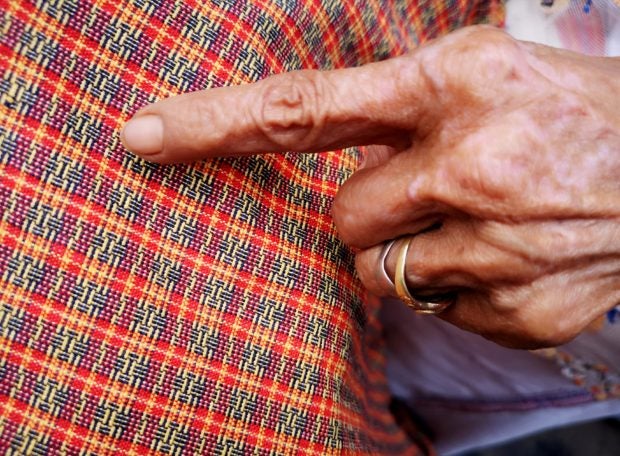 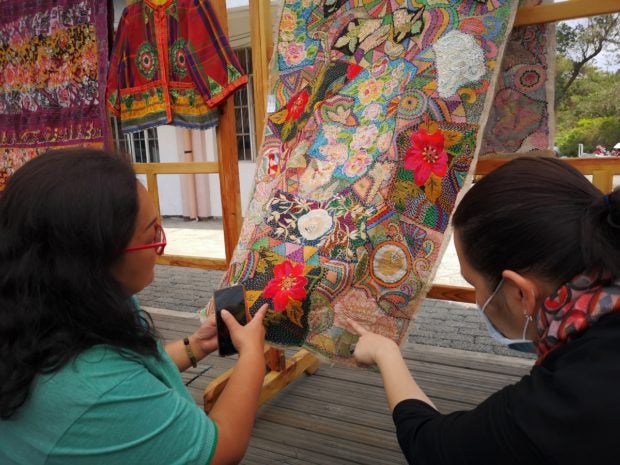 COMMUNITY COLORS “Abel” weaver Norma Mina displays a blue “kinamay,” which she describes as her community’s “lucky cloth” that is used in rituals, or offered as token during peace pacts. She also produces orange abel, with a distinct four-sided star motif typical of Itneg traditional designs, which was among the Cordillera fabrics displayed during a recent interaction with fashion icon Patis Tesoro at the University of the Philippines Baguio. —PHOTOS BY EV ESPIRITU

Tesoro says artisans must embrace the idea of reusing discarded traditional garments to help find them a new market. This may include repurposing leftovers, such as quilt, stitches or patchwork on fabric for a stylish effect, or using ornamental needlework on which pieces of fabric are sewn.

“You can do anything. Bits and pieces, or stripes. [You can also] superimpose them. Texture, colors, sew them together,” she says. 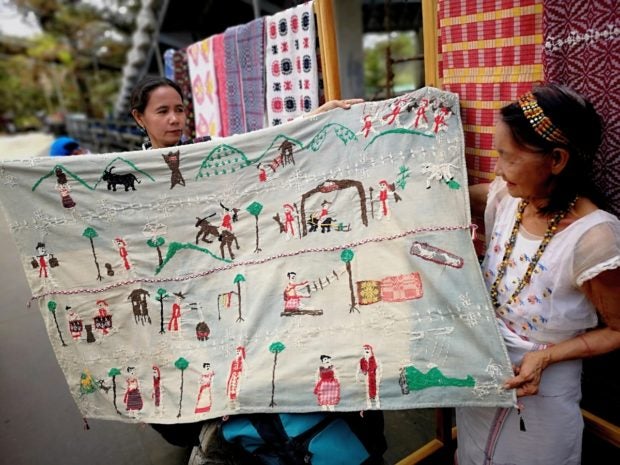 ANCIENT STYLE Norma Mina, 78, shows off a 66-year-old “abel” featuring Itneg embroidery, which she calls “am-amma.” It was produced by her grandmother, Malmagan, to depict the story of weaving in their community. 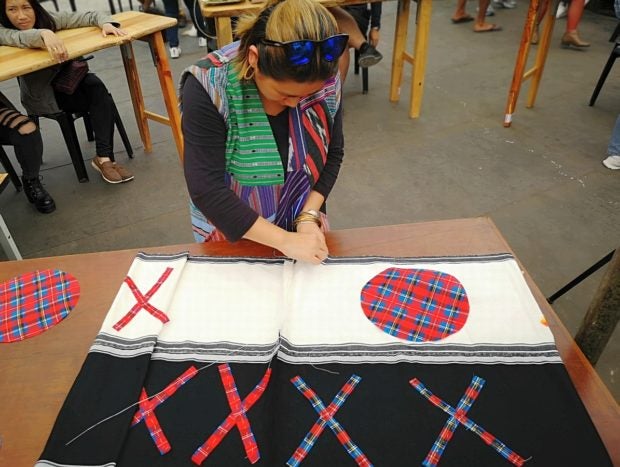 FUSION Textile artists from the Cordillera try to combine fabrics from different cultural groups to create new materials that may be appreciated by the younger generation.

Abra master weaver, Norma Mina, 78, says she learned about recycling from Tesoro’s talk. She is fascinated by the idea of using throwaway cuts to enhance a dress or to adorn a “terno.”

“If my ‘inabel’ is too short or unusable, I usually just use it as towel or rag at home,” Mina says.

She would not want the traditional designs to be forgotten as she appreciates the new art and modern design ideas.

For Cawed, discarded fabrics are not a huge concern. Her shop, Topskill Handicrafts, weaves its own fabrics that enables them to control production.

But she admits that small discarded fabrics could not be avoided all the time. These could be turned into pillowcases, blankets, or purses to go with the designed attire.

Reusing small woven fabric cuts, however, may require more support and work since Cordillera fabrics are easier to unravel.

More local designers are using traditional weaves as accents on garments. Their designs are geared toward a younger market. 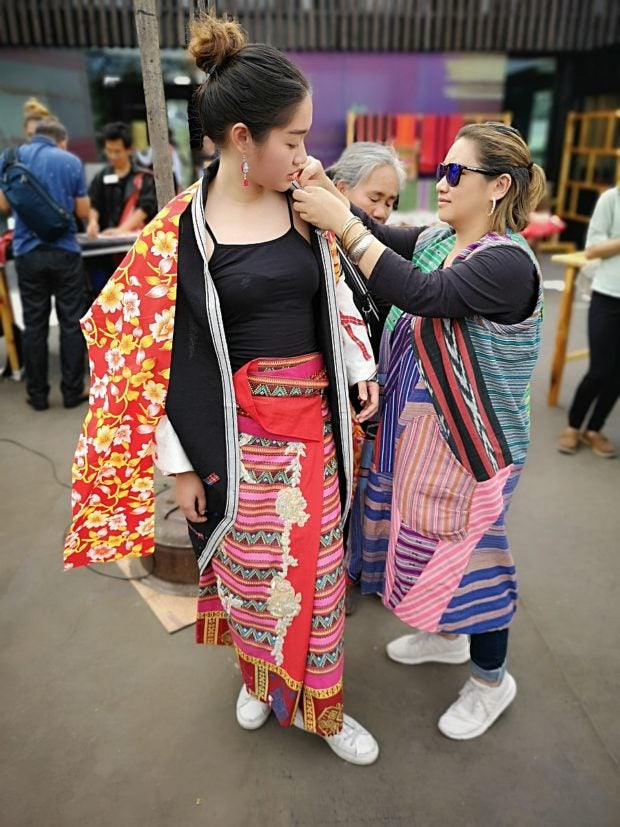 NEW CORDILLERA STYLES Students from the University of the Philippines Baguio try out layers of Cordillera fabric, some woven by traditional artisans. Expert weavers gathered recently in Baguio City to discuss the new market that has opened for their products.

“Young designers are not repurposing the woven fabric, instead they use it to enhance a ‘thrifted’ denim jacket, which is also another way to modernize the fabric,” Cawed says.

Would she use traditional weaves this way?

Cawed says: “Beyond being a cloth, woven fabrics are also a part of our culture. As long as you don’t make a mockery of the fabrics, I’m OK with it.”