Nazarene devotion: Portrait of a nation 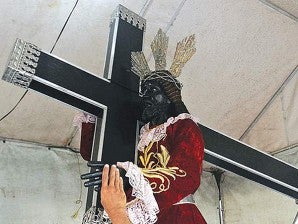 VIVA SEÑOR NAZARENO! The Black Nazarene is being prepared for Monday’s procession. For the author, it is his annual rite to beg for forgiveness and his renewal of his subscription to God’s grace. RAFFY LERMA

There are unwritten rules that the initiate must learn for a safe and proper participation in the annual fiesta procession of the Mahal na Poong Nazareno in Quiapo.

Unlike grammar and composition though, there’s no school where the cadence and idiom of this immensely popular religious ritual are taught.

As a result, it’s often to each his own, the wilder the holier, as the miraculous image of the Black Nazarene stammers through frenzied streets, under constant siege from a maddened multitude trying to beat one another, jumping, pushing and shoving, in a blind rush to reestablish a link with the Lord.

A first-timer who observes the procession from a safe distance, say the Quezon Bridge, is bound to be mystified and wonder what, honestly, it is all about.

It’s the only one of its kind in the world, a masterpiece in madness, a canvas of immeasurable chaos.

For Monday’s procession, the Philippine National Police (PNP) has doubled security and assigned a total of 1,600 policemen to patrol the environs.

Manila Mayor Alfredo Lim has made a televised appeal for order, warning those who are caught with intoxicating drinks that they will be apprehended and fined.

“If they allow liquor along the route, this would result in a strenuous day,” the mayor said.

Last Thursday, I got instructions from my original mentor, my Big Boss here, which said: “Please write for Sunday issue, page 1, your entire Nazarene experience, what’s the Nazarene in your life.”

The deadline was set for Friday; I had to beg for a one-day reprieve.

Honestly, I had wanted to ask for at least a month, if not a year, because you can’t be expected to complete an epic at the drop of a hat.

Of course, there’s nothing truly grand in my affair with the Black Nazarene. It’s the scope of its relevance and influence that could more than fill a book.

Like the majority of devotees, I first joined the procession seasons ago, in thanksgiving, when I was in my late 20s.

I did not start out alone, but had gone to Quiapo, barefoot, with five other first-timers from our riverside village in Mandaluyong.

I had no idea how to go about it, so I first observed from the sidelines.

There was no available space even from a distance and that, coming close to the procession line, would itself prove an ordeal.

It was an anxious wait, but once I had summoned the courage, I tried to move in, inch after excruciating inch, and gingerly pushed my right shoulder through a couple of burning bodies, before tugging at the thick rope pulling the Nazarene.

Breaking in was surprisingly easy, but soon enough, the man behind me put his hand on my head and pushed it a little to the left, the better to save me from undue harm.

He next reminded me to always keep the rope secure on my shoulder.

It was smooth sailing, and then one veteran devotee ahead of us shouted indayog (sway) to send the line moving in cadence.

I observed some of those close by whose eyes were closed, some with tears, as they trotted in solemn, wordless rhythm.

After we had traversed, trouble-free, a full block, a huge horde of waiting devotees jumped in and swarmed our flank.

There was severe disruption, followed by a shout of otso before everything went haywire.

I tried desperately to hold on, but in an instant, the atmosphere turned musty. I tried to breathe deep to maintain my balance but the area had turned airless and definitely deathly.

I had no choice but to raise my left hand in surrender.

Someone instantly pulled me out from the line that by then had felt like a smoke-choked burning room.

I did learn the basic rules in my first try.

After that debut, my first salang, I sat on the pavement.

I felt wasted but quietly ecstatic.

It was not easy to explain at first.

But, more than 30 years after I first participated in the annual Quiapo ritual, I have no reason to deny the Black Nazarene is anything but wood when borne in procession, whether solemn or pagan.

Anyway, I was to learn that, unlike me, not all of those in my group had succeeded in breaking in and tugging at the rope pulling the Nazarene the first time they tried.

This would not be the case with one famous broadcaster who went on to become the country’s vice president.

The fellow was herded trouble-free into the line, complete with television coverage.

He was a success, was even filmed grabbing perilously at the snaking rope, a no-no in the rules of the procession.

He has never again been seen in Quiapo after that well-publicized debut.

Of course, the most tragic sight I had from the procession came in the early 1990s, on the pavement outside the Galaxy Theater on Rizal Avenue where I passed by the figure of a poor man, obviously lifeless, being guarded by a lone candle deep in the cold night.

The next day, a picture came out in the papers saying the nameless man had lost his life in the procession. It was not specified whether he choked or was crushed and trampled upon.

There was no doubt he tried to join the procession, which has turned into a gigantic canvas of despair and utter poverty, a portrait of our poor nation, to beg for some material solace.

In my case, I continue to go to the procession to beg forgiveness, and in the process rekindling my links, not unlike a simple customer, annually renewing subscription to the Lord’s grace.

Yes, I also beseech the Nazarene to grant me the ability to write at least one true sentence each living day.

But I have no reason whatsoever not to be eternally thankful.