US schools scramble to feed students after coronavirus closures 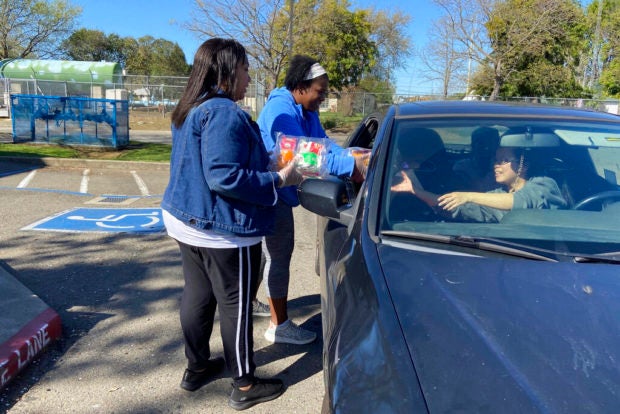 In this Tuesday, March 10, 2020, photo, Florin Elementary School staff hand out food to students and parents driving in, after their facility closed in response to the coronavirus Sacramento, California. (AP Photo/Cuneyt Dil)

ELK GROVE, California — Kiyana Esco needs free school lunches and breakfasts to feed her six children. But with schools shutting down over coronavirus concerns, she’s scrambling to pick up the meals, care for her kids and keep her job.

Esco, a single mother who was just promoted to manager at a Dollar Tree, fears she’ll be fired because she can’t work following school closures in Elk Grove, the fifth-largest district in California. She’s among the parents who are relying on school leaders as they look for ways to keep millions of America’s poorest children from going hungry.

While schools across the U.S. close their doors to try to prevent the spread of the new virus, they’re cobbling together arrangements for grab-and-go lunch bags or setting up delivery routes. Congress is considering making it easier for school meals to be passed out at places like food banks as schools shut down in Ohio, Maryland and New Mexico and in major cities like Los Angeles, Houston, San Francisco, Seattle and Washington, D.C.

Even though most patients infected with the virus have only mild or moderate symptoms such as a fever or cold, school closures are widely accepted as a key way to slow the spread.

Some of the nation’s largest districts, including New York City and Chicago, were open for now, with concerns over their mission to provide free or reduced-cost meals to hundreds of thousands of students from lower-income families.

But others, like Los Angeles and San Diego, which had held out on closing for the same reasons, on Friday announced they would close.

“There is evidence the virus is already present in the communities we serve, and our efforts now must be aimed at preventing its spread,” Los Angeles Superintendent Austin Beutner and San Diego Superintendent Cindy Marten said in a joint statement.

The urgent decisions have left schools and cities scrambling to figure out how to make sure students don’t go hungry.

“It’s been extremely stressful. Everything is evolving by the hour with new cases, new proclamations,” said Michelle Price, a school administrator who oversees 29 districts in Washington state, where many schools are closed until April 24. “We haven’t dealt with anything like this, so we’re doing as we’re learning.”

In the U.S., more than two-thirds of the 31 million students who regularly eat school lunches, or 22 million, depend on a free or reduced-price school lunch as a main source of their daily nutrition, according to the School Nutrition Association.

The U.S. Agriculture Department oversees food programs in schools, but it has restrictions on how students can get their subsidized meals. Advocates and states are pressing the agency to ease some rules, but USDA leaders say it’s up to lawmakers to loosen eligibility.

Several measures now pending in Congress would offer a nationwide waiver so school meals can be offered in a wide variety of settings, such as food banks, and allow the USDA to grant waiver requests expanding eligibility even if they resulted in added costs to the government.

U.S. Rep. Sanford Bishop, chairman of the House panel on agriculture appropriations, told reporters this week that changes to the USDA’s authority could possibly be included in an economic stimulus package that President Donald Trump is pushing Congress to consider.

Meanwhile, states and school districts are pushing forward with their own plans.

Seattle Public Schools set up tents to provide meals outside the first two schools it closed earlier this week. But after canceling classes at all 104 campuses Wednesday, the 55,000-student district won’t be able to set up dozens of sites for “grab and go” sack lunches for all schools until Monday, spokesman Tim Robinson said.

In nearby Northshore School District in Washington state, officials also have been using school buses to deliver meals to homes, providing the service in limited cases when families are unable to travel.

And in Ohio, which is shutting down its schools for at least three weeks, the Cleveland district is considering how to provide bagged breakfasts and lunches for students over the next few weeks, most likely by designating pickup locations or using school buses, district CEO Eric Gordon said.

The District of Columbia said it would make meals available for students at several different school sites.

In the Coxsackie-Athens Central School District in New York, superintendent Randy Squier said officials are working out scenarios and options depending on federal assistance to offer “meals on wheels” with breakfast and lunch delivery to its 1,300 K-12 students at school bus stops, drive-through pick up at schools, and possibly food service in its school cafeterias if classes are cancelled.

Parents are left trying to figure out how to get food, and worried about how long the situation could last.

“This doesn’t calm down until May, right?” said Sophia Saelee about the outbreak. On Tuesday afternoon, she was among dozens of parents who picked up meals for their kids from Valley High School south of Sacramento in Elk Grove, where the school district was one of the first in the nation to close down on Monday because a student’s family tested positive for the virus. A day later, schools there began offering drive-thru breakfast and lunch giveaways at a dozen campuses, handing out more than 2,100 meals.

Saelee said her schedule wasn’t interrupted because she works in the evenings but when she starts an office job next month, it could be trickier.

For Esco, it hasn’t been easy to juggle. She drove to Valley High School this week to pick up free meals, uncertain if she would lose her job because she was looking after her children.

“Let’s just say I didn’t expect it to turn my whole schedule upside down,” she said.