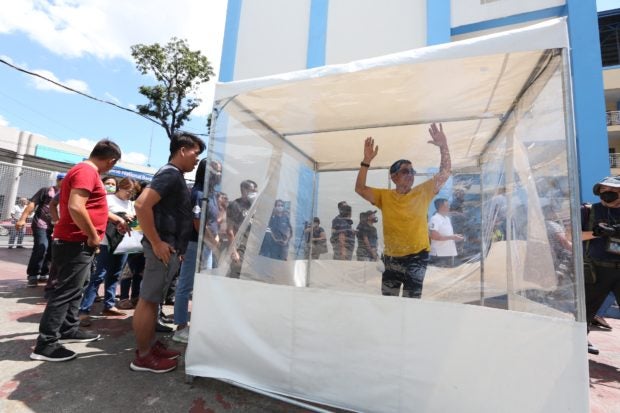 There were 12 new coronavirus (COVID-19) cases in the country, according to data provided by the Department of Health (DOH) on Friday, which brought the current total to 64.

The House of Representatives also disclosed that one of its staff members had tested positive for the virus, prompting the suspension of work in the chamber.

In New York, a Filipino diplomat also tested positive for COVID-19, in the first recorded case at the United Nations headquarters in the city.

According to the DOH, five of the new cases are from Metro Manila or the National Capital Region (NCR), one is from Rizal province, while the residence of the remaining six have yet to be verified.

All of them are confined in various hospitals in Metro Manila, except for Case No. 64 who was admitted at St. Joseph Hospital and Medical Center in Bataan province.

In Caloocan, Mayor Oscar Malapitan confirmed on Thursday night that a resident had tested positive and confined at St. Luke’s Medical Center in Quezon City.

The patient is included in the DOH’s updated list, Malapitan said in a Facebook post. He also said the city government had started contact tracing of those exposed to the patient, whose home had also been disinfected.

More than half of the total cases, at least 42, are from Metro Manila, while 14 are from the other provinces.

Health officials did not face the media on Friday to clarify if there already was community transmission of the SARS-CoV-2 virus, which causes COVID-19.

The DOH had said earlier that, under its own parameters, escalation to Code Red Sub level 2 would only be triggered by community transmission.

On Thursday night, when President Duterte held a televised news conference announcing a community quarantine on Metro Manila, he had approved a resolution by the Inter-Agency Task Force on Emerging Infectious Diseases to raise the coronavirus alert to its current level.

Last week, Assistant Health Secretary Maria Rosario Vergeire warned of the possibility of “community transmission, where there are unrelated, unlinkable clusters of cases in different places and simultaneous transmissions.”

In a statement, Health Secretary Francisco Duque III said the decision to implement a community quarantine on the capital region was “made in the best interest of the public.”

Acting Philippine Ambassador to the United Nations Kira Azucena said the diplomat reported her condition to the UN’s medical director’s office as well as New York City’s health department, which advised her to go on self-quarantine.

The diplomat is assigned to the Philippine Permanent Mission to the United Nations and represents the Philippines in the General Assembly’s Sixth Committee, which deals with legal matters.

Azucena said the diplomat last visited the UN headquarters on Monday for about 30 minutes, from 12:50 p.m. to 1:20 p.m. She was asymptomatic then.

The next day, she came down with flu-like symptoms and, in accordance with the Mission’s office protocol, did not report for work that day.

She visited her physician, tested positive for flu and was prescribed Tamiflu. She was confirmed on Wednesday to be positive for the coronavirus.

“It was after celebrating her birthday with friends during a light rain and she’d just come from Florida,” Locsin said in another tweet.

Around 3,000 people are employed at the towering riverfront UN headquarters. Numerous other diplomats from the 193 UN member-countries come and go between their own missions in the area and the Manhattan UN complex.—WITH REPORTS FROM AFP, NIKKA G. VALENZUELA AND JEROME ANING

Read Next
No more rubbing alcohol? ‘Lambanog’ to the rescue
EDITORS' PICK
A gem of a residence in the new normal
Been there, done that but what’s the difference between MECQ and GCQ?
BREAKING: 3,226 latest COVID-19 cases bring PH’s total to 106,330
Water remains our saving grace right now
PNP: Checkpoints back in MECQ areas
Smart 5G goes live
MOST READ
MECQ guidelines in infographics
Doctors group to Duterte: ‘There was never a call for a revolt’
MECQ in NCR, other areas: Mass transportation suspended, quarantine pass required anew
Corruption during pandemic? Don’t blame it all on Duterte – Pacquiao
Don't miss out on the latest news and information.