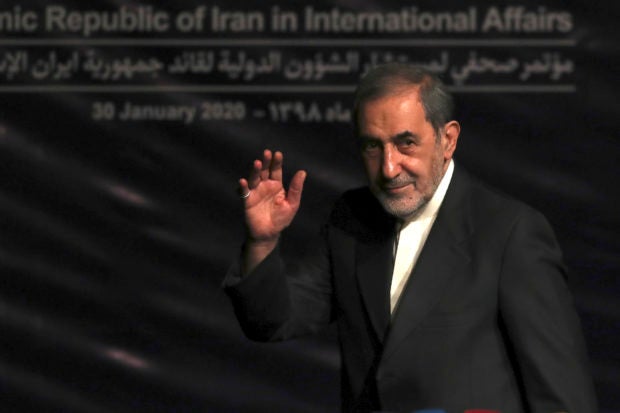 In this January 30, 2020, photo, Ali Akbar Velayati, an adviser to the Iranian supreme leader Ayatollah Ali Khamenei, waves to media at the conclusion of his press conference, in Tehran, Iran. In hard-hit Iran, state-run TV announced that Velayati was quarantined at home after testing positive for the virus. He is a close, trusted adviser to the 80-year-old leader of the Islamic Republic, who was recently seen wearing disposable gloves at a tree-planting ceremony, apparently out of caution about the virus. (AP Photo/Vahid Salemi)

DUBAI, United Arab Emirates — Dubai announced Friday that it would hold a major horse race without spectators later this month in response to the new coronavirus, as a senior adviser to Iran’s supreme leader was quarantined at home after testing positive.

Persian Gulf countries have been scrambling to contain the outbreak, which has infected thousands of people in nearby Iran — one of the largest clusters of cases outside China.

The Dubai World Cup, planned for March 28, is the world’s richest purse for horse racing, with a $12 million prize last year. Dubai’s crown prince, Sheikh Hamdan bin Mohammed Al Maktoum, separately announced a $400 million stimulus plan for the city-state whose real-estate market and tourism industry have been hard-hit by the virus.

For most people, the coronavirus causes only mild or moderate symptoms, such as fever and cough. For some, especially older adults and people with existing health problems, it can cause more severe illness, including pneumonia. The vast majority of people recover from the new virus and the COVID-19 illness it causes.

King Hamad bin Isa Al Khalifa of the island nation of Bahrain, meanwhile, released nearly 1,500 prisoners, around 900 of whom were pardoned. The move appeared aimed at preventing the virus from spreading inside detention facilities.

It wasn’t immediately clear if those released included opposition activists detained as part of Bahrain’s yearslong crackdown on all dissent.

In hard-hit Iran, state-run TV announced that Ali Akbar Velayati was quarantined at home after testing positive for the virus. He is a close, trusted adviser to Supreme Leader Ayatollah Ali Khamenei, the 80-year-old leader of the Islamic Republic, who was recently seen wearing disposable gloves at a tree-planting ceremony, apparently out of caution about the virus.

The outbreak has not spared Iran’s top officials, with its senior vice president, Cabinet ministers, members of parliament, Revolutionary Guard members and Health Ministry officials among those infected.

Iran has reported more than 10,000 cases and more than 400 deaths. There are concerns that the number of infections is much higher, with some Iranian lawmakers even speaking out.

The virus, which first emerged in China late last year, has infected nearly 130,000 people worldwide and caused more than 4,700 deaths.

Islamic authorities across the Middle East have canceled or limited Friday prayers in response to the outbreak.

In Israel and the Palestinian territories, Jewish, Christian, and Muslim authorities said religious services would continue to be held but announced new precautions.

At the Western Wall in Jerusalem, the holiest site where Jews can pray, authorities will limit entrance to an enclosed area and set up tents that each accommodate up to 100 people. The moves came after the Israeli Health Ministry barred gatherings of more than 100.

The Western Wall Heritage Foundation said there would be no restrictions on worship in the main plaza as it constitutes a “wide, open space.”

The Latin Patriarchate in Jerusalem called on churches to enforce the Health Ministry’s guidelines, including with Sunday services.

The Islamic endowment that oversees the Al-Aqsa mosque compound in Jerusalem, the third holiest site in Islam, said Friday prayers would be held as normal but encouraged people to pray in the outer courtyards and refrain from crowding inside the mosques. It advised the elderly and sick not to enter crowded mosques and urged everyone to “maintain personal hygiene.”