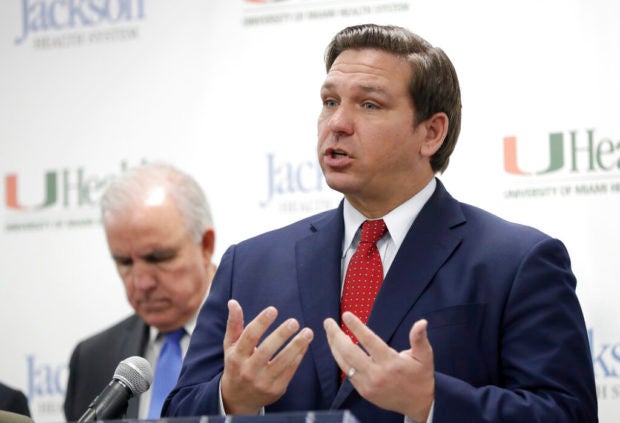 Florida Gov. Ron DeSantis, speaks during a news conference alongside Miami-Dade County Mayor Carlos Gimenez, rear, at Jackson Memorial Hospital, Thursday, March 12, 2020, in Miami. DeSantis noted that most of the Florida infections from the virus, which causes the disease COVID-19, stemmed from international travel. AP Photo

MIAMI — Theme parks at Walt Disney World Resort in Florida and Disneyland Paris Resort will be closing through the end of the month, starting at the close of business Sunday, the Walt Disney Company announced.

The company said in a statement Thursday that the decision was made “in an abundance of caution” to protect guests and employees amid the global outbreak of the new coronavirus. The decision came hours after the announcement of the planned closure of Disneyland in California.

Additionally, Disney Cruise Line will suspend all new departures beginning Saturday and continuing through the end of the month, the statement said. The Walt Disney Company will pay its cast members during that closure period, according to the release.

Orlando is the nation’s most visited tourist destination, bringing vast numbers of people from around the globe to its major theme parks, which also include Universal Orlando and SeaWorld Orlando. The city attracted 75 million visitors in 2018. No one has tested positive in the two counties that are home to the popular amusement parks.

Universal Orlando Resort also announced in its own emailed statement that it will temporarily close its theme parks starting at the end of business on Sunday. The company said it anticipates remaining closed through the end of March but will continue to evaluate the situation.

It added that Universal Orlando’s hotels and Universal CityWalk will remain open and that it has instituted flexible programs for guests who had booked travel packages and tickets with the resort.

In a day of fast-moving developments, NASCAR announced a March 22 race in Homestead, Florida would take place without fans.

Florida’s governor has strongly advised municipalities and businesses to limit or postpone large gatherings as concerns spiked over the new coronavirus, which stood at 27 cases statewide including a man testing positive at a Palm Beach airport.

“I am recommending to local municipalities and private entities to strongly considering limiting or postponing mass gatherings,” Gov. Ron DeSantis said at a news conference Thursday in Miami.

It is normally a busy time of year in Florida as the Sunshine State usually hosts lucrative spring break tourism.

Miami Beach authorities declared spring break over, suspending permits for concerts and an LGBTQ festival as venues in the city shut down.

Florida politicians also expressed concerns about coming into contact with Brazilian President Jair Bolsonaro’s press secretary Fabio Wajngarten. Wajngarten tested positive for the virus after he joined Bolsonaro while visiting South Florida over the weekend and Monday — including a meeting with President Donald Trump at Mar-a-Lago.

U.S. Sen. Rick Scott, Miami Mayor Francis Suarez and the Miami-Dade County mayor announced in news releases or on Twitter on Thursday that they would be self-isolating. Scott said he did not feel ill and was told he did not need to be tested, but that he would isolate himself as a precaution.

Between late Wednesday and Thursday, the Florida Department of Health announced seven more cases of COVID-19, the disease caused by the virus. There have been two deaths in Florida.

The new coronavirus causes only mild or moderate symptoms for most people. But it can cause more severe illness including pneumonia in older adults and people with existing health problems. The vast majority of people recover within weeks.

DeSantis said most of the Florida infections stemmed from international travel, especially noting that 10 of the positive cases in the state involved people returning from a cruise on the Nile River in Egypt. One of those resulted in one of the two deaths reported by the state.

The case of a 61-year-old man from Broward County is associated with the Port Everglades cruise ship terminal. Two other cases include a 63-year-old New York resident, who was in Florida for Daytona Beach’s Bike Week and a 70-year-old Broward County resident who attended a recent Emergency Medical Services conference in Tampa.

A 56-year-old Miami-Dade County resident who had recently traveled to Iran and a 68-year-old man from Seminole County have also tested positive for the virus. Two more are being investigated to see if they are travel-related — a 65-year-old Broward man and a 57-year old Lee County man.

A passenger on a JetBlue flight from New York that arrived late Wednesday at Palm Beach International Airport tested positive for COVID-19 and other passengers were advised to monitor their health, authorities said.

Even though most cases in Florida are linked to travel outside the state, universities, government officials and businesses are taking measures to control the spread within the state.

Miami Beach Mayor Dan Gelber said museums and venues were shutting down altogether or canceling their events. The city will not issue permits for spring break concerts and the Miami Beach Gay Pride parade, scheduled for early April. Public beaches are still open.

“To the extent that anyone can declare spring break is over, it is over this year,” Gelber said.

Public universities — which have some of the country’s largest enrollments — will move to remote instruction effective Monday. Schools in Broward County — the county with the highest number of infections at 7— are canceling academic, athletic and extracurricular events starting Monday.

As a further precaution ahead of Tuesday’s presidential primary, the governor urged elections officials to move any polling places away from nursing homes or other facilities that house or care for the elderly. And he suspended all official travel for state employees for 30 days.

Read Next
Clear-cut guidelines on community quarantine needed, says Poe
EDITORS' PICK
In speaking out, young athletes prove they are more than just the sum of their skills
COOCAA TV Bounce Back Sale offers up to 50% off
Sotto: Duterte could get terror bill next week
Smart launches new LTE-Advanced Pocket WiFi Plans starting at P699 per month
DOH: Presymptomatic infection possible
Cherry Mobile teams up with Cloud Panda PH, launches online store
MOST READ
Kim Chiu’s viral dance video has no violations, MMDA agrees
Something about KC that worries mom Sharon
‘Stay informed, vigilant’: UP urges students, alumni to report fake Facebook accounts
Sotto: Duterte could get Anti-Terrorism Bill next week
Don't miss out on the latest news and information.